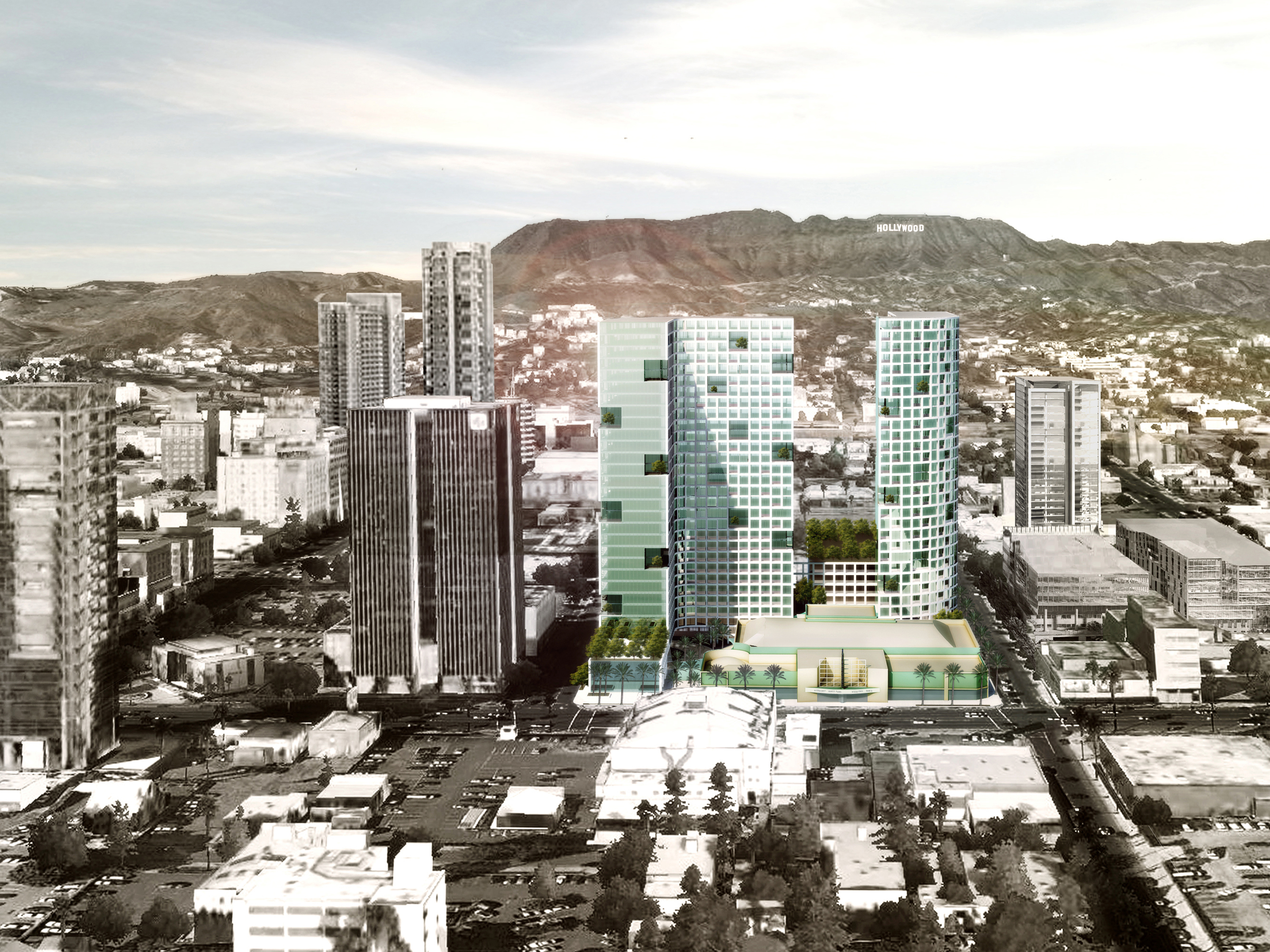 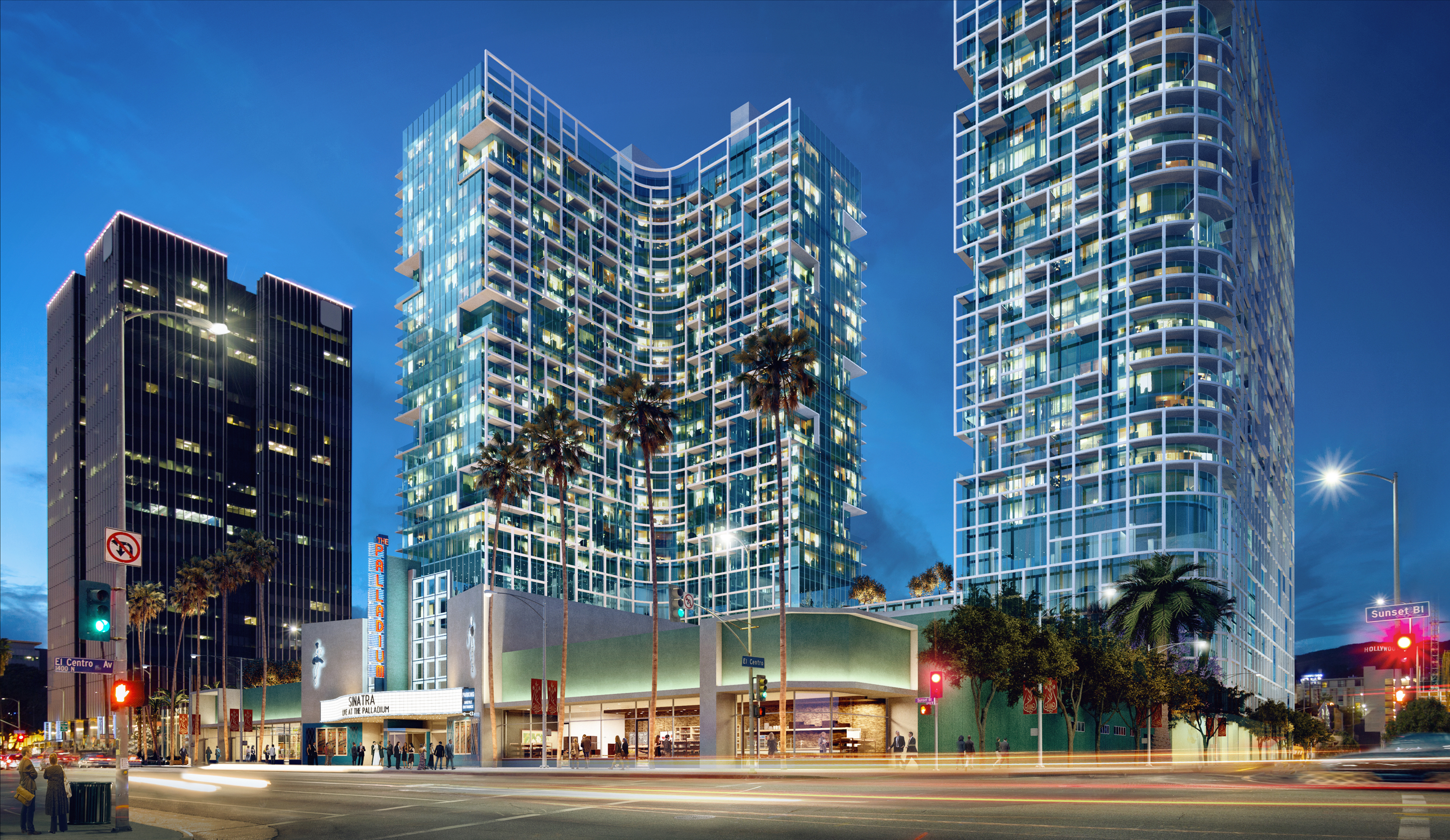 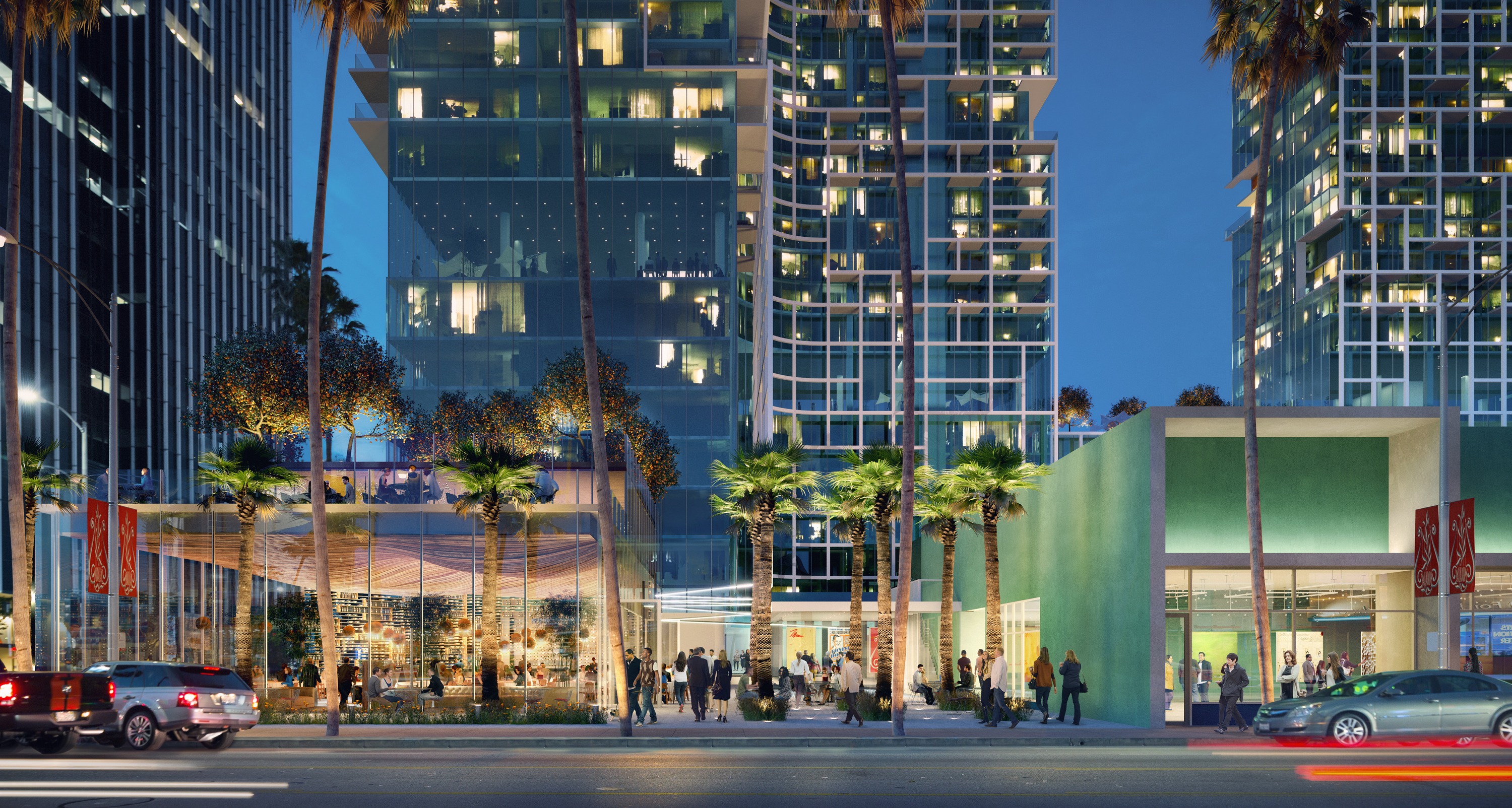 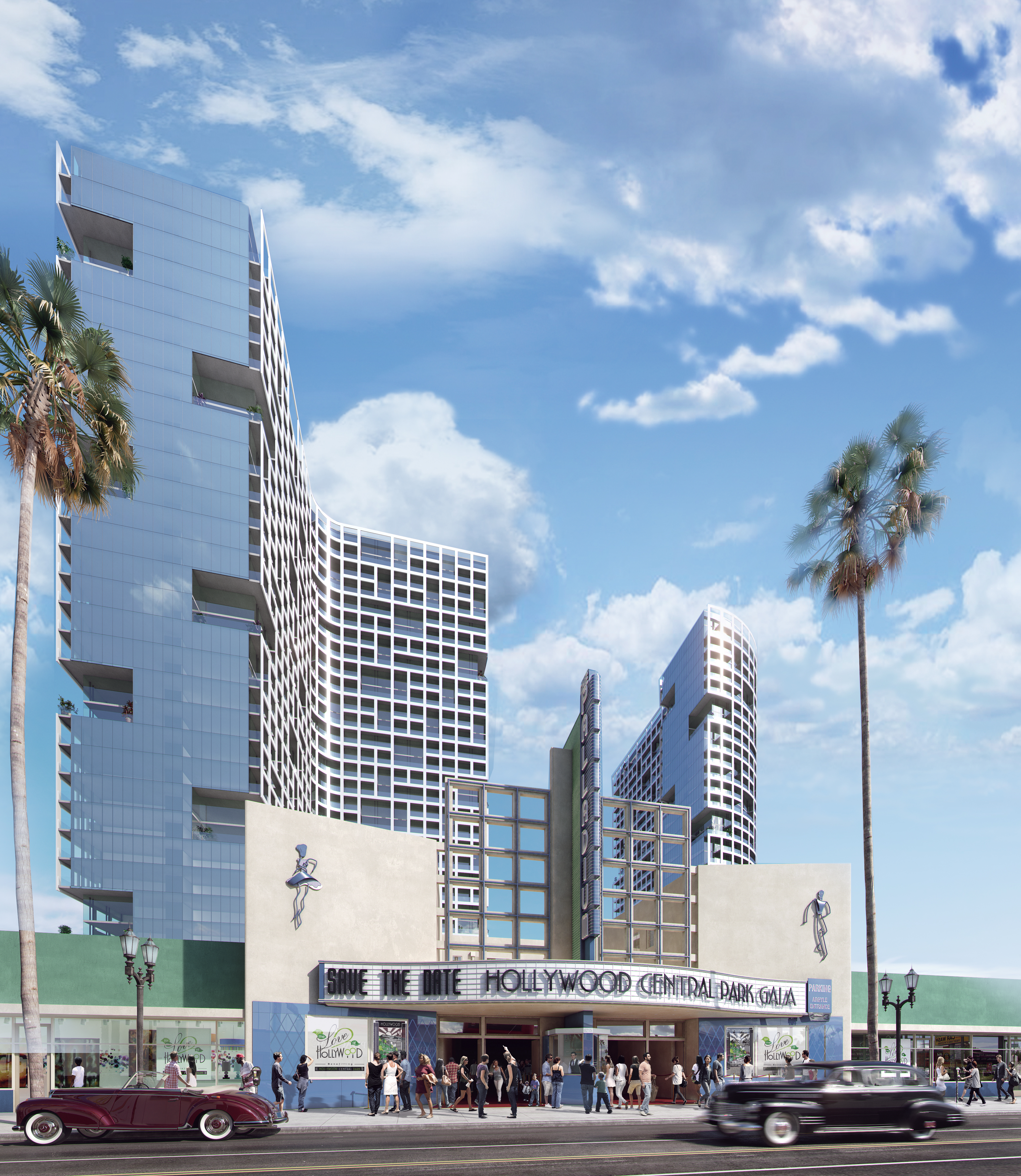 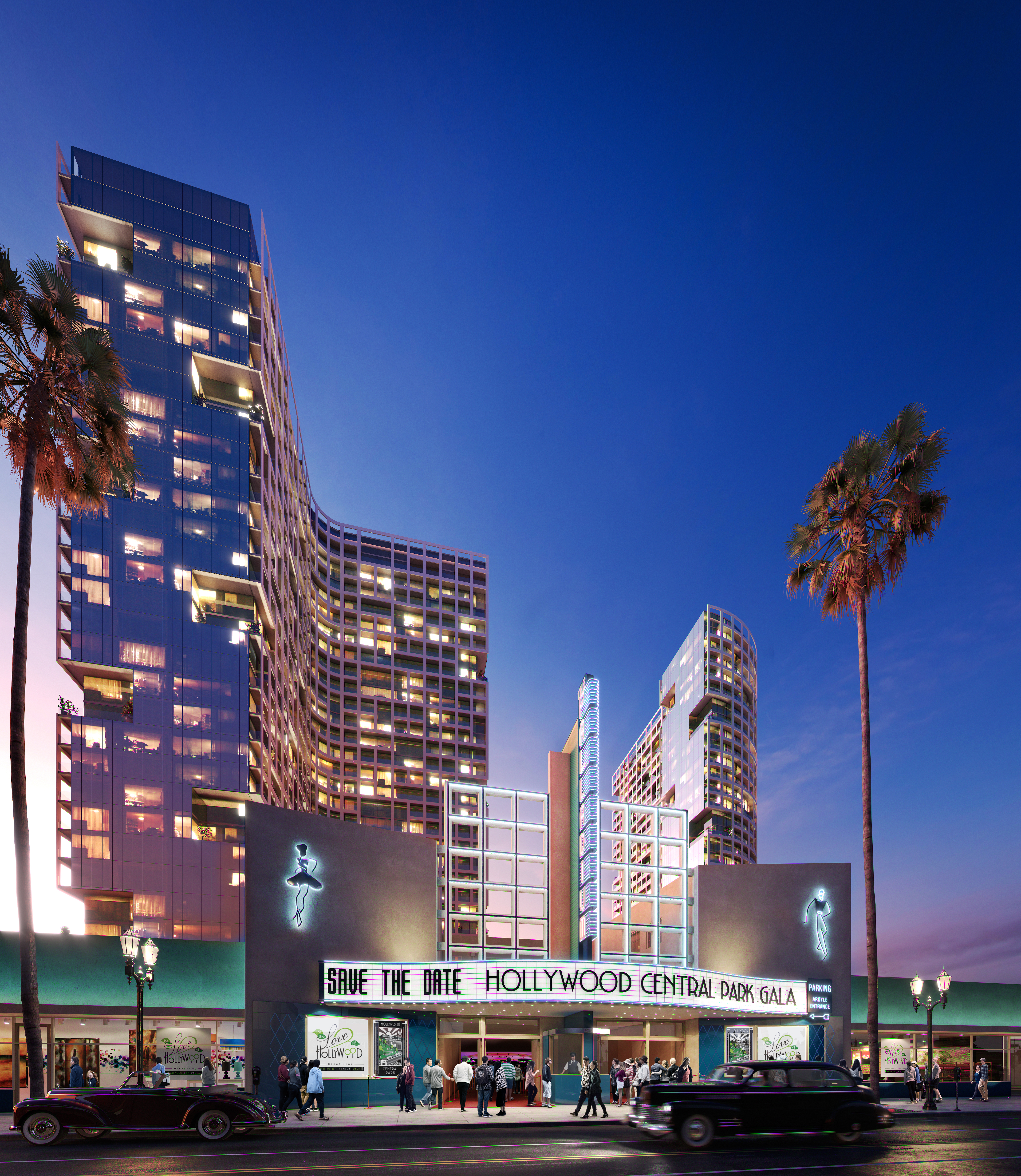 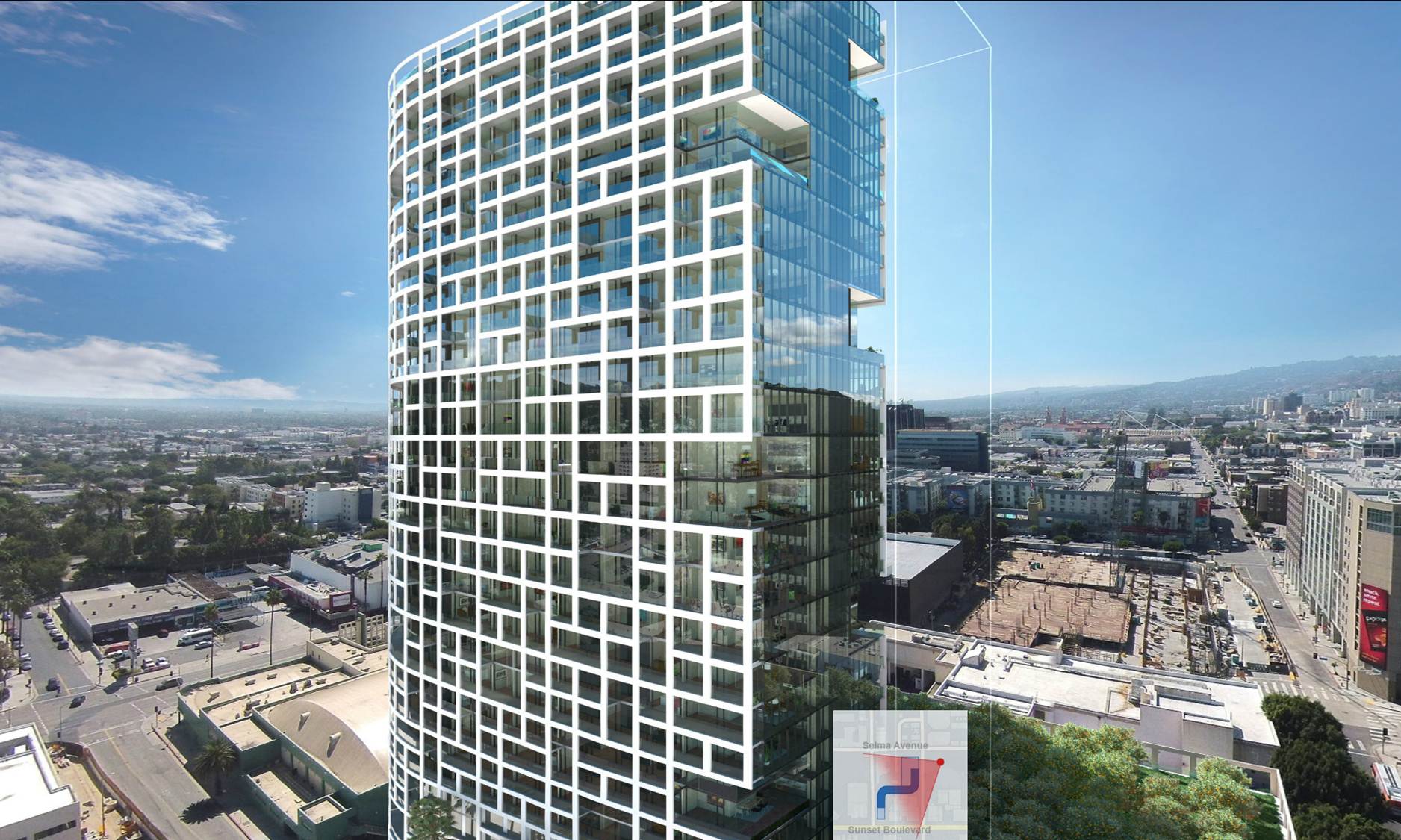 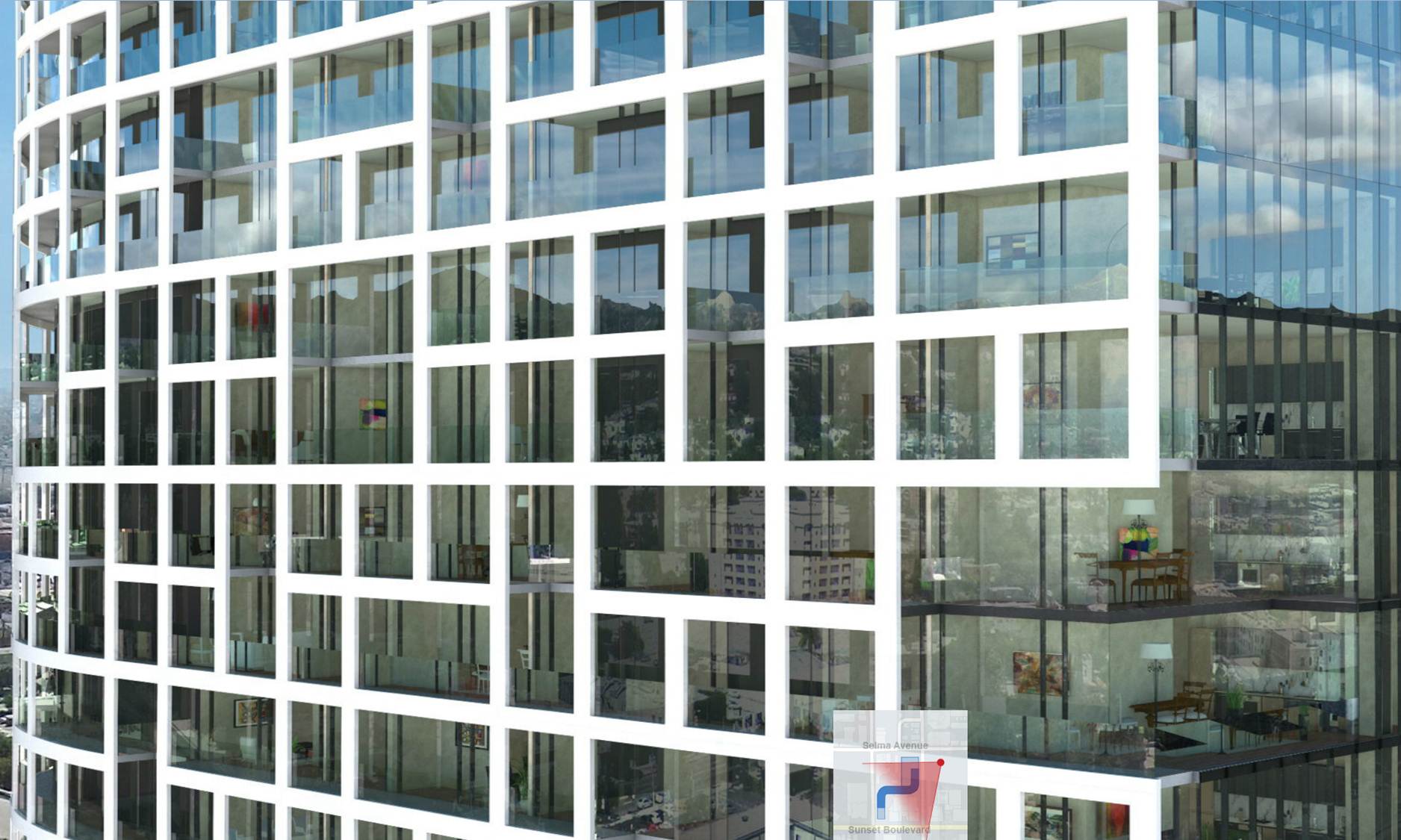 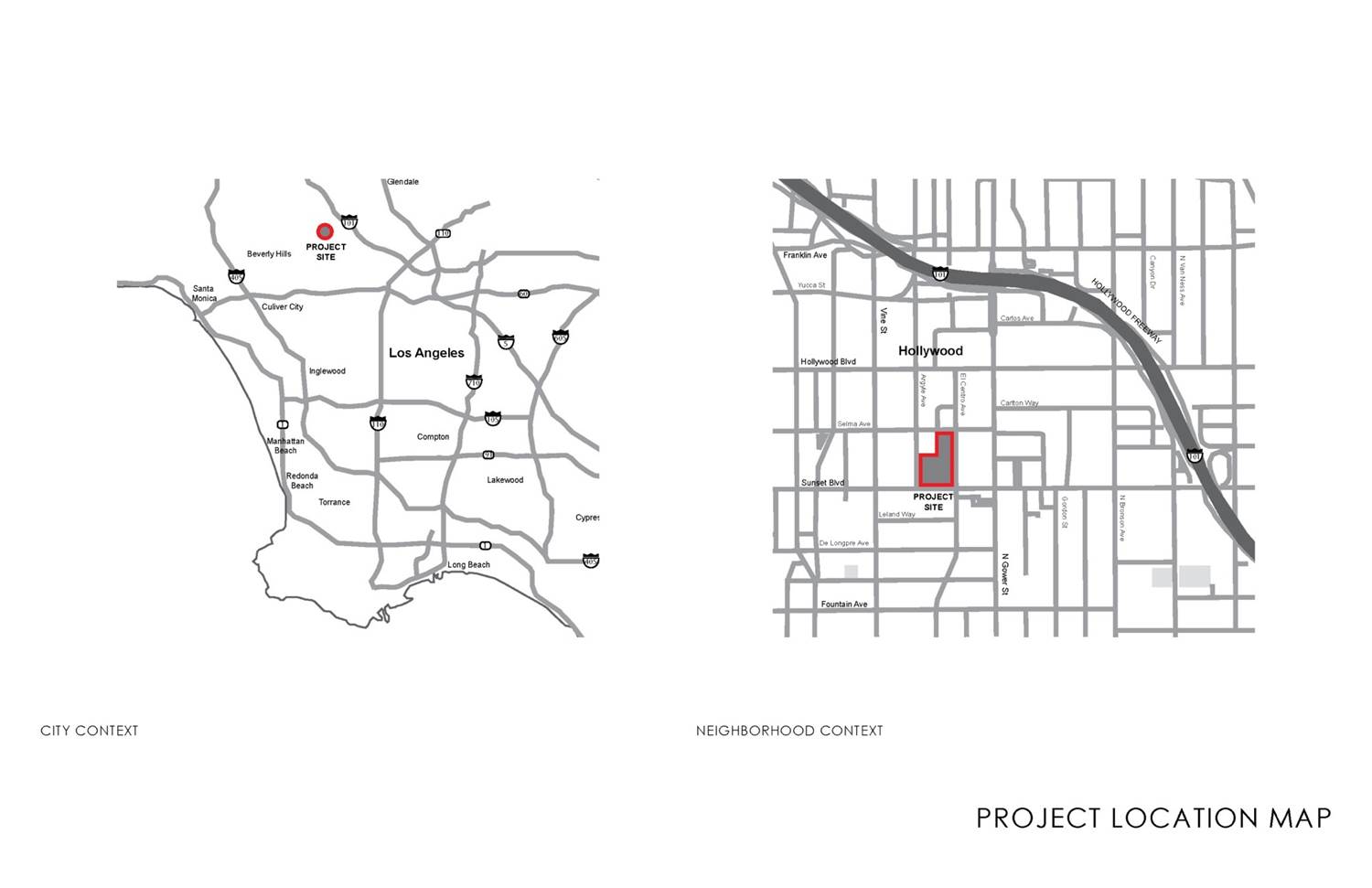 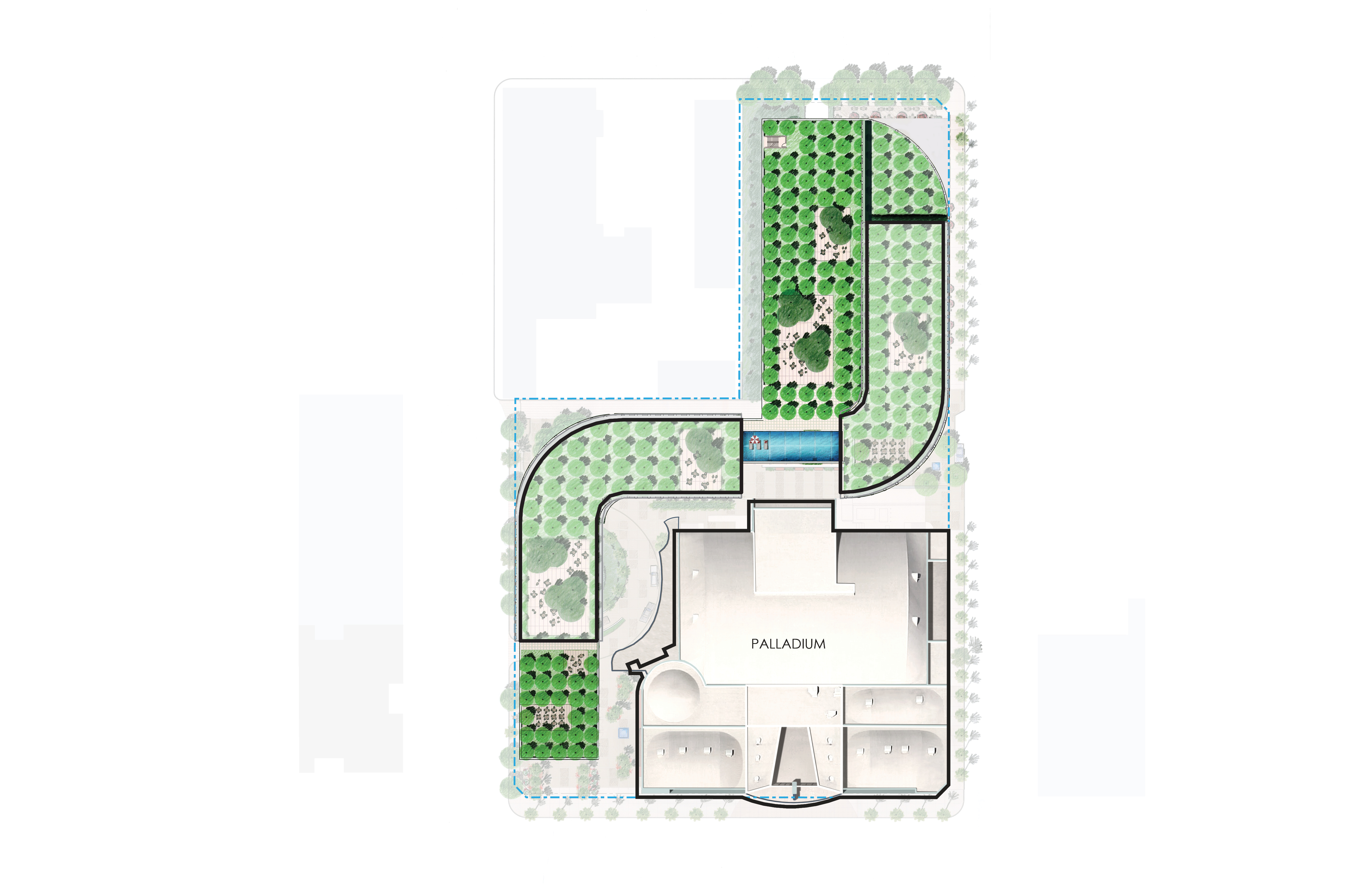 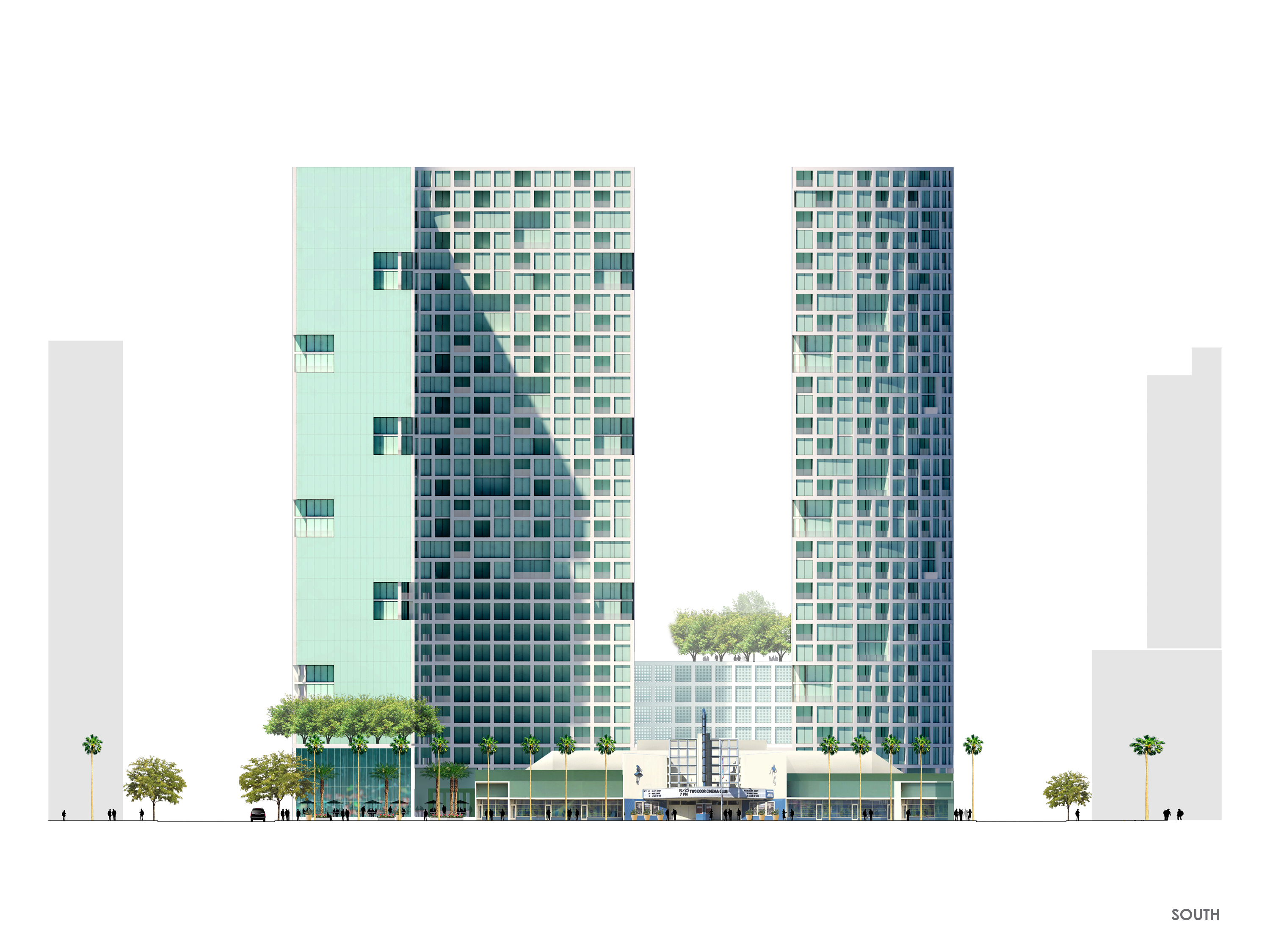 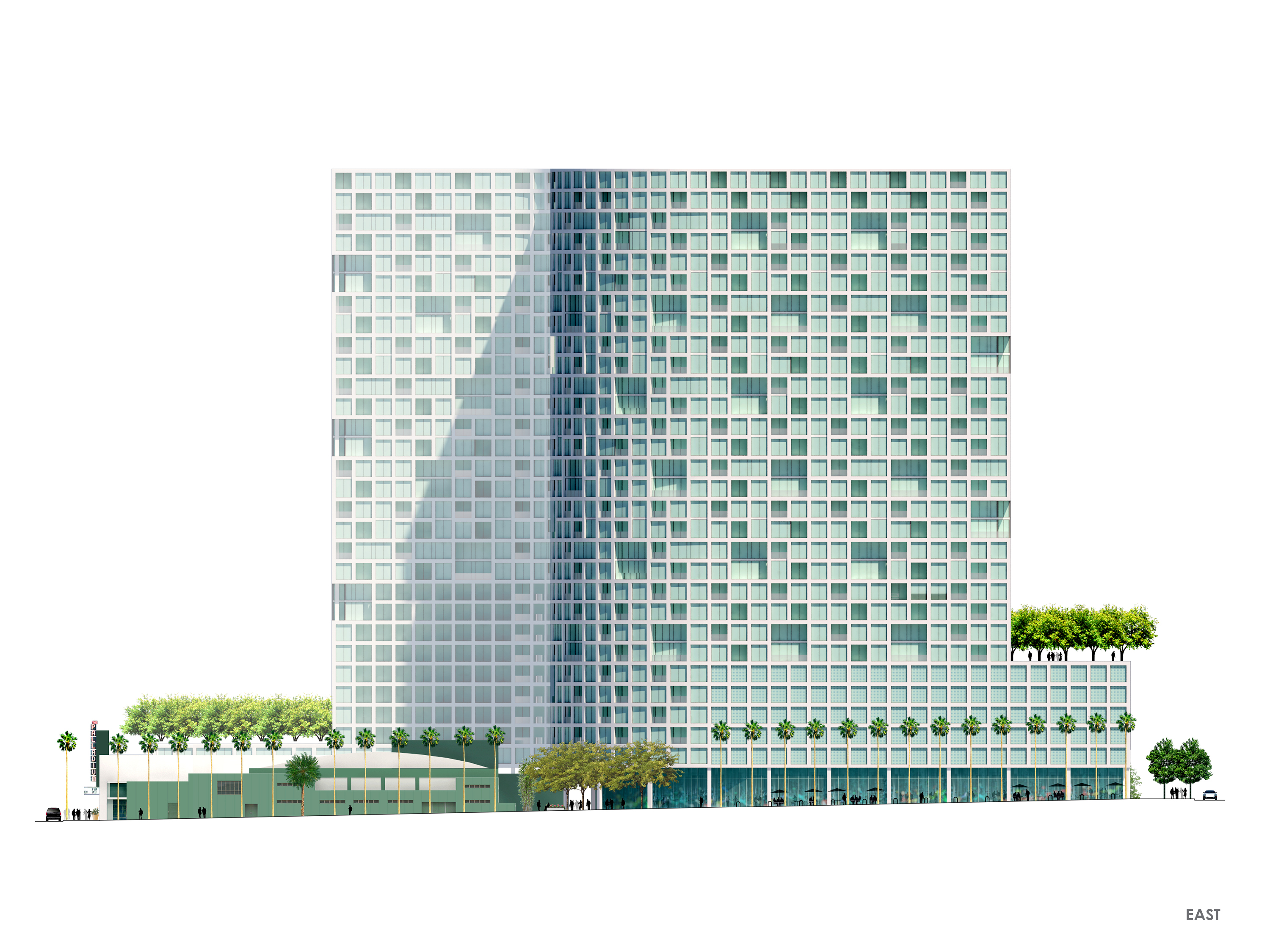 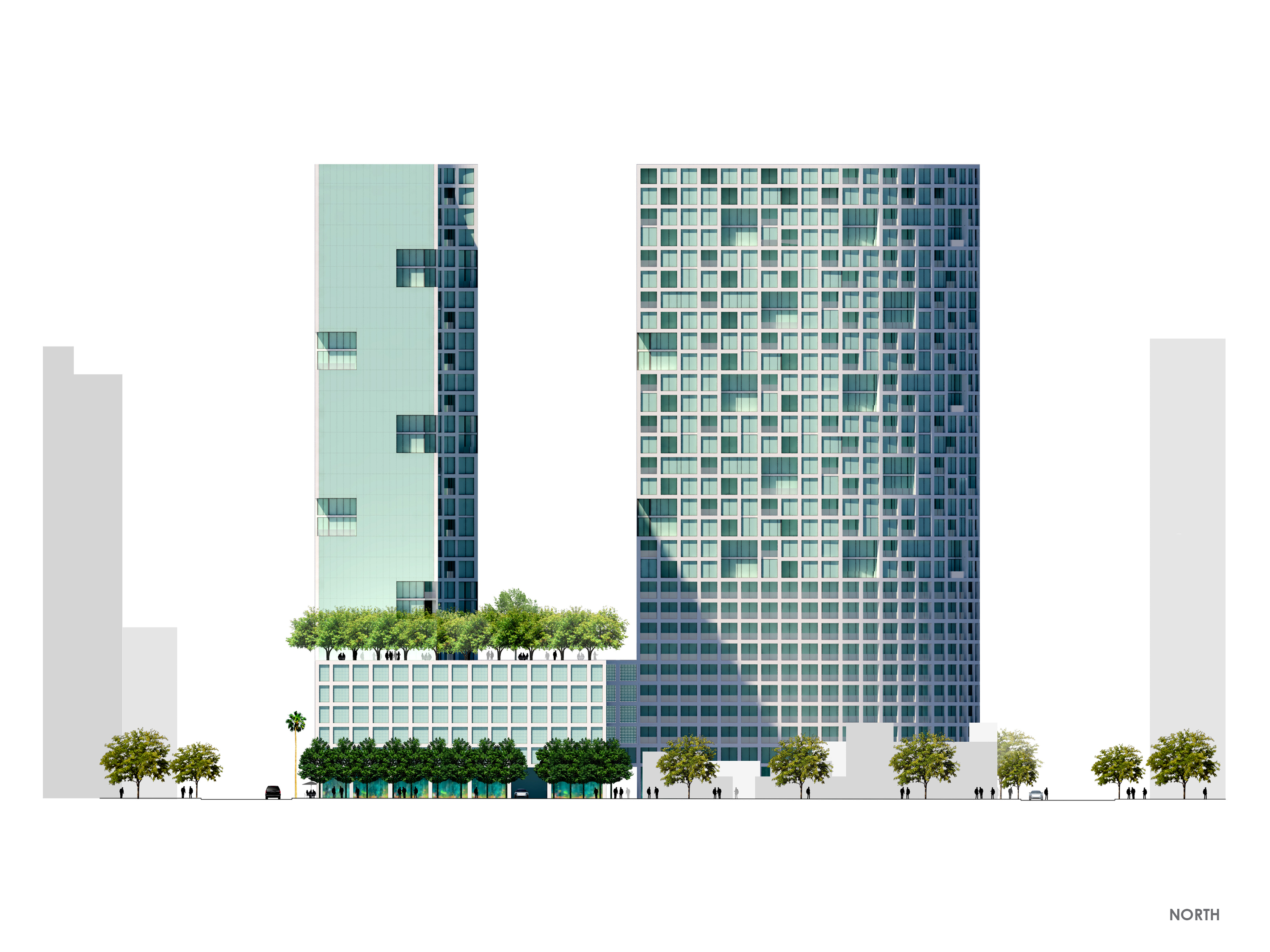 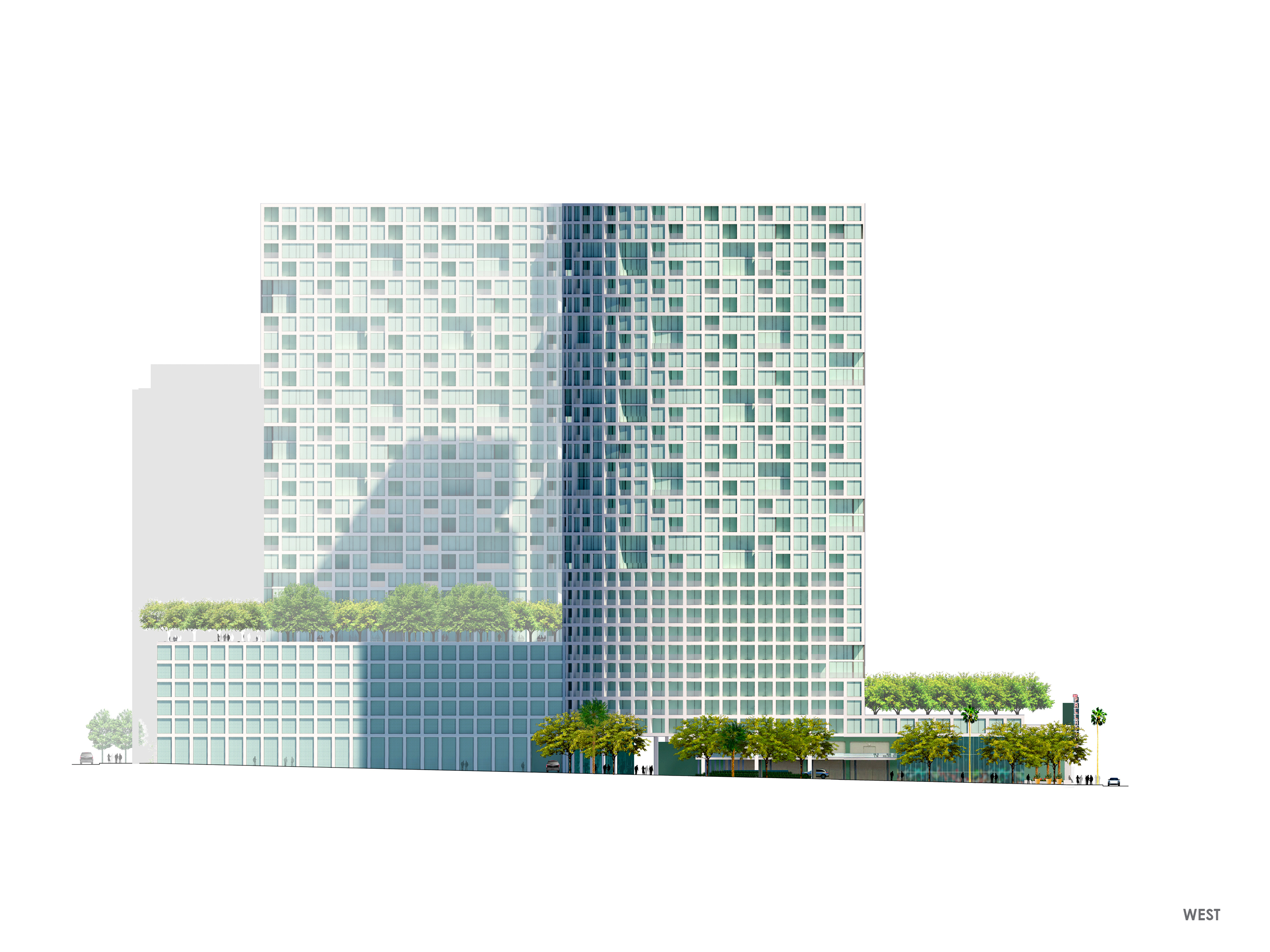 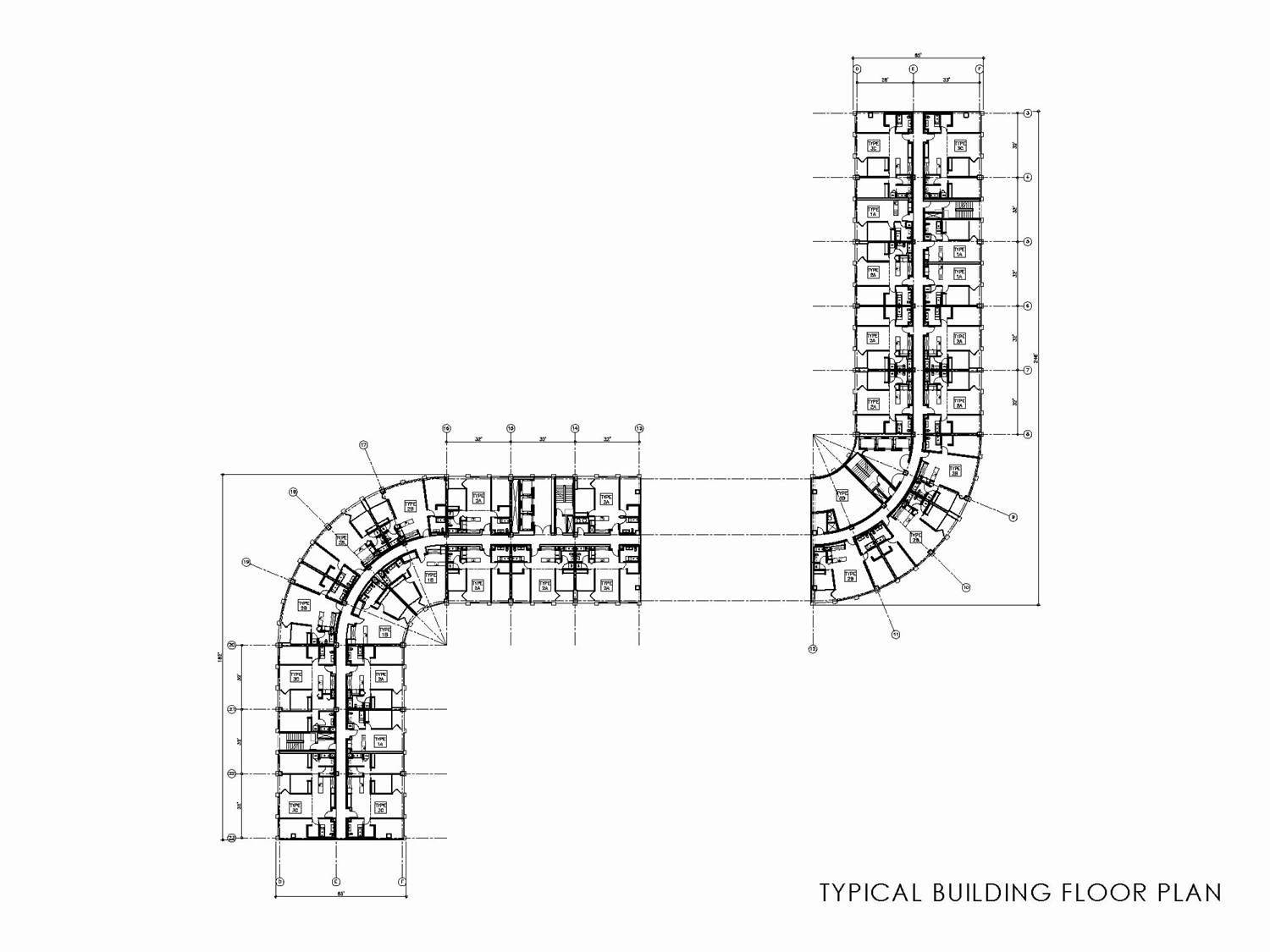 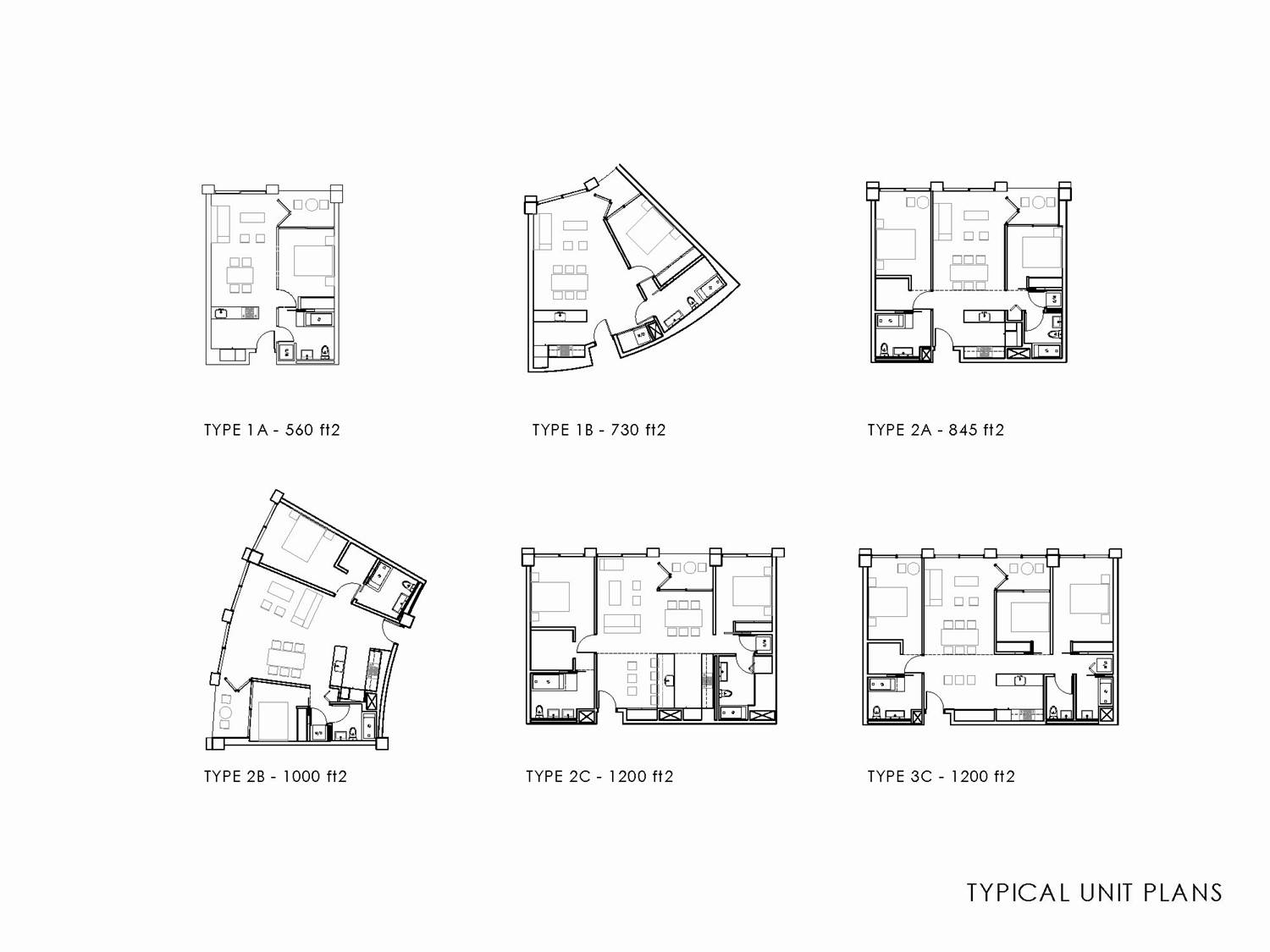 The two Palladium towers express the unique qualities of the horizontal city of Los Angeles, of its grids and patchwork of buildings and green, in a new form which extrudes vertically. Streets grids become structure. The gardens of the bungalows on the ground become the balconies of the apartments in the sky giving each home a way to enjoy the climate of sunshine. White Hollywood Mediterranean Modern is the imagery used to invigorate with this new form.

Our goal is to provide an urban context for the historic concert venue, the Palladium, which recognizes the development of Hollywood as a dense and urban precinct with intense street life. Currently the building sits detached in a sea of parking and contributes little to the activities of the street. To achieve this urban quality, two towers, one hotel and residential, the other all residential, are wrapped around the Palladium, replacing the existing sea of parking with buildings.

Active Street frontage is provided on Sunset Boulevard by improvements to the existing Palladium storefronts. On El Centro, new arcaded retail is proposed. On Argyle, the geometry of the existing curved canopy is extended to become a vehicular turnaround and central auto access point and hub for the entire project. This open and public space is defined by a generous gateway framed by the new structure.

Courts on Sunset, Argyle and El Centro penetrate the block end extend the street. Between the existing Palladium and the new corner infill at Sunset and Argyle, a court is established which connects to the interior of the project and allows for box office queuing off the sidewalk. Off Argyle, the gateway connects a central auto court and public green space. At El Centro, a court is formed at the residential entry to new building. Passages connect these three courts through the block in both directions creating pedestrian cross paths which bisect the site.

Along Sunset Blvd, the street edge is continued by the new retail corner building which is similar in height and scale to the Palladium.

The curves of the new pair of towers extend the deco language of the Palladium. They are massed to emphasize the tall marquee by creating a void so that it is always see frontally against the sky. The mass of the towers is scaled by a collection of parts that relate to the scale of the Palladium façade, both in size and language, where the blocks that form the street wall and the grids which surround the marquee repeat as the language of the skin.


The two curved towers softly drape around the Palladium and continue the diagonal path of towers that cross Sunset and move to Selma and El Centro with the new CBS Tower. The Southern Tower has a 250 room Hotel on the first 8 floors, with apartments above. The north tower is all residential.

The street level is activated with public spaces for the hotel and retail along El Centro, all connected with pathways which bisect the site. The hotel lobby is entered from Argyle at the court gateway. A connection from this area links to the residential lobbies which are also accessed from El Centro.

All the rooftops are planted with citrus orchards which recall the earlier farms of Hollywood, and reconnect to this past.

Parking is provided in below and above grade structures accessed off the main auto court on Argyle, or from Selma.

In the cut between the two towers are outdoor amenity spaces for the project.