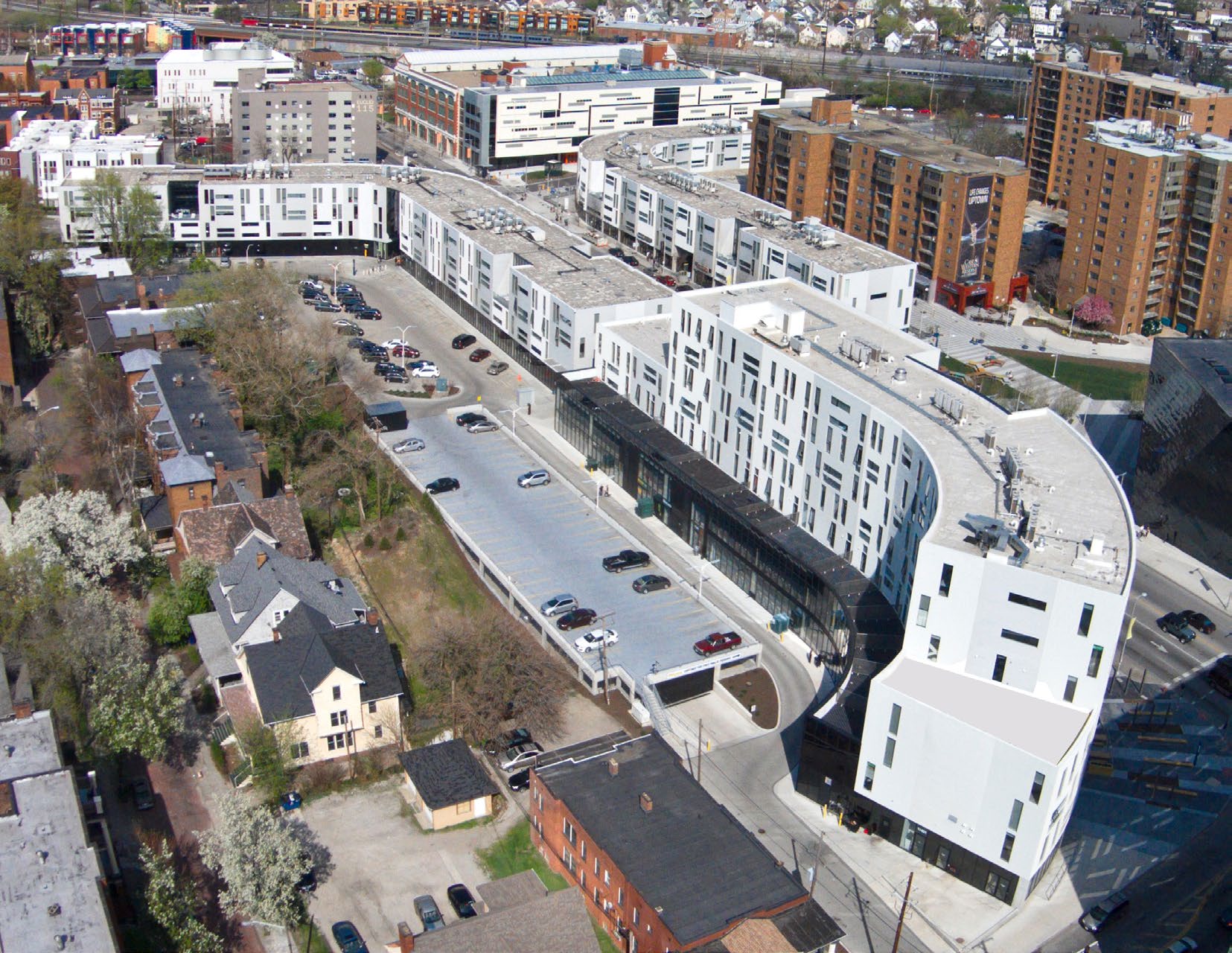 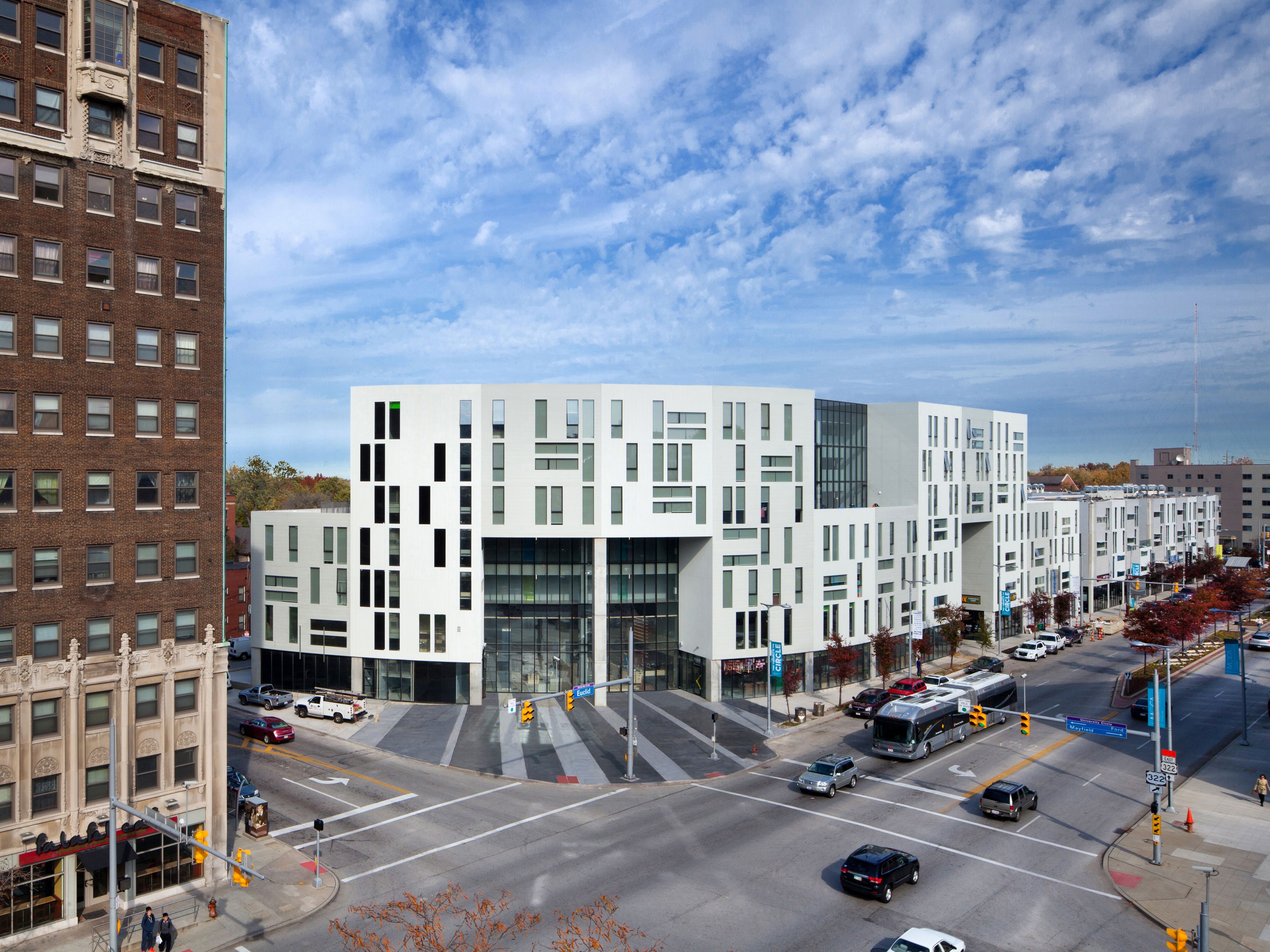 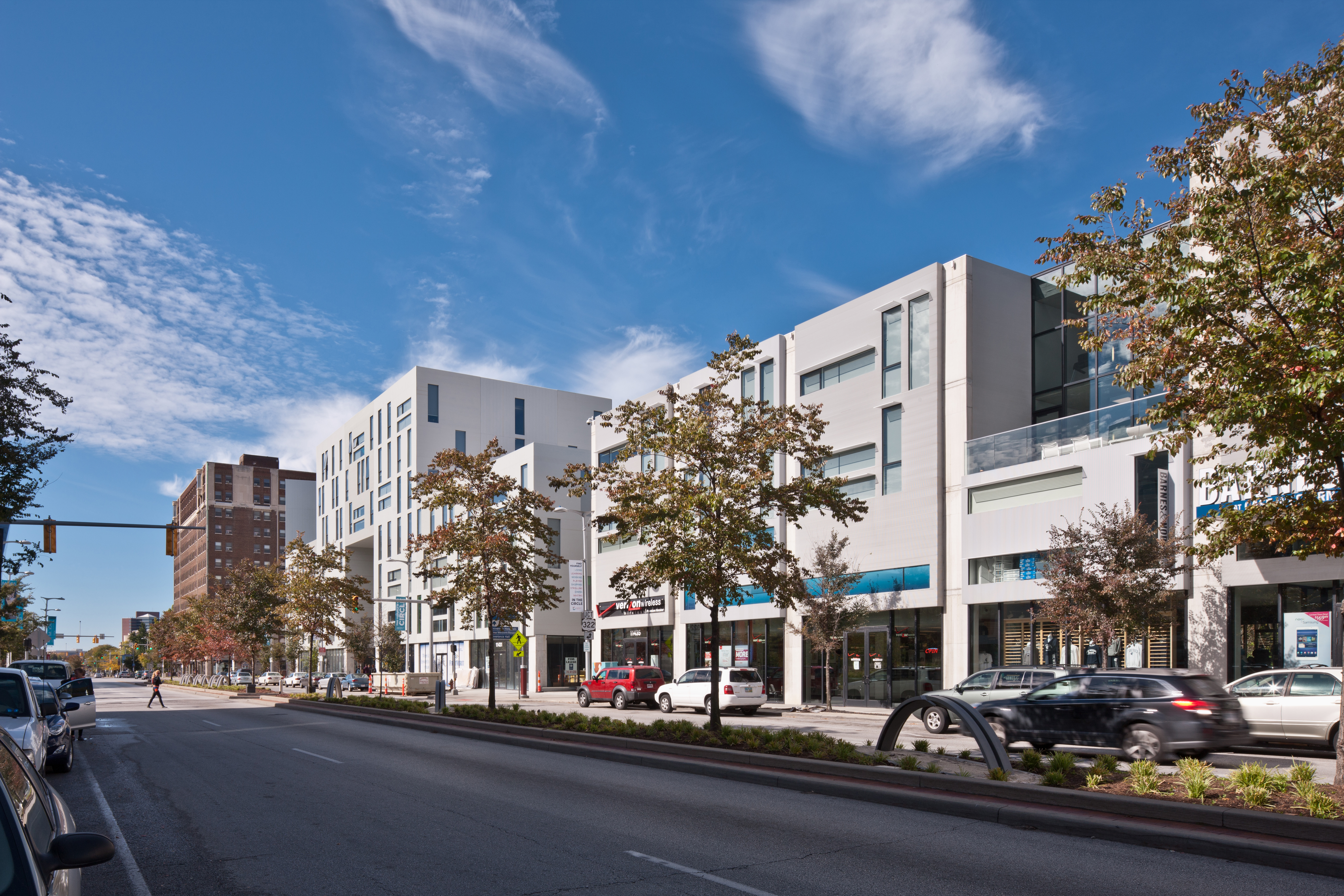 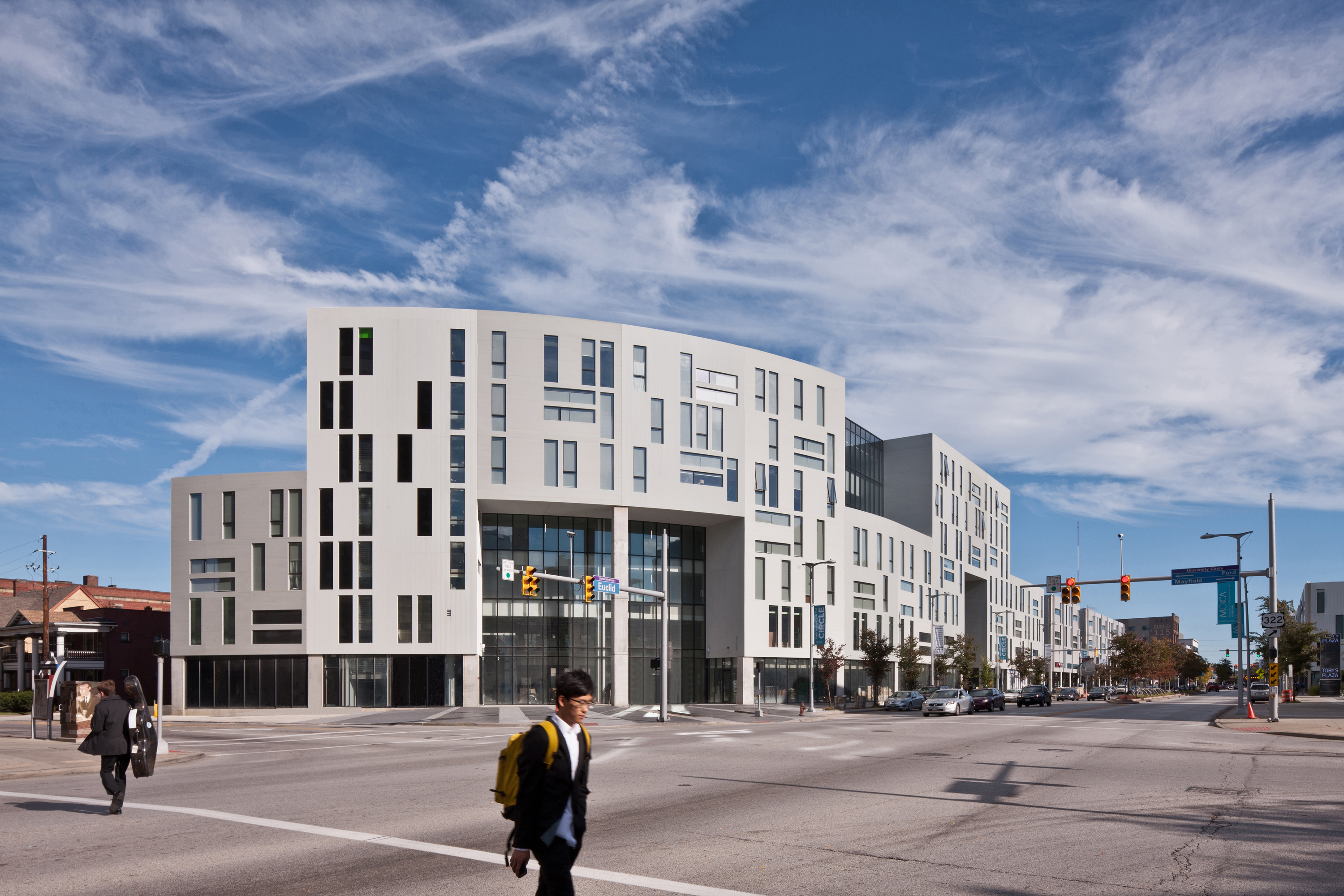 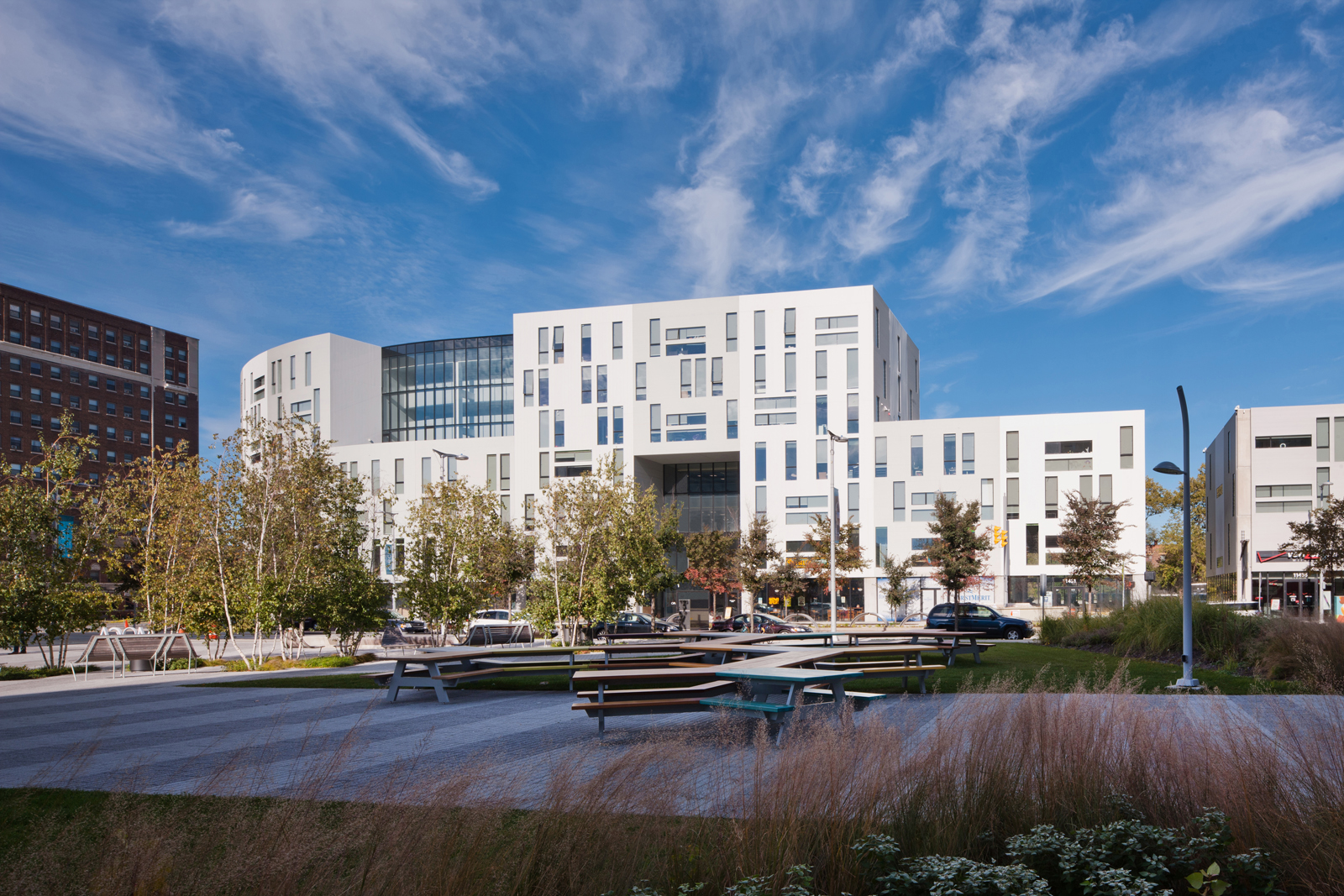 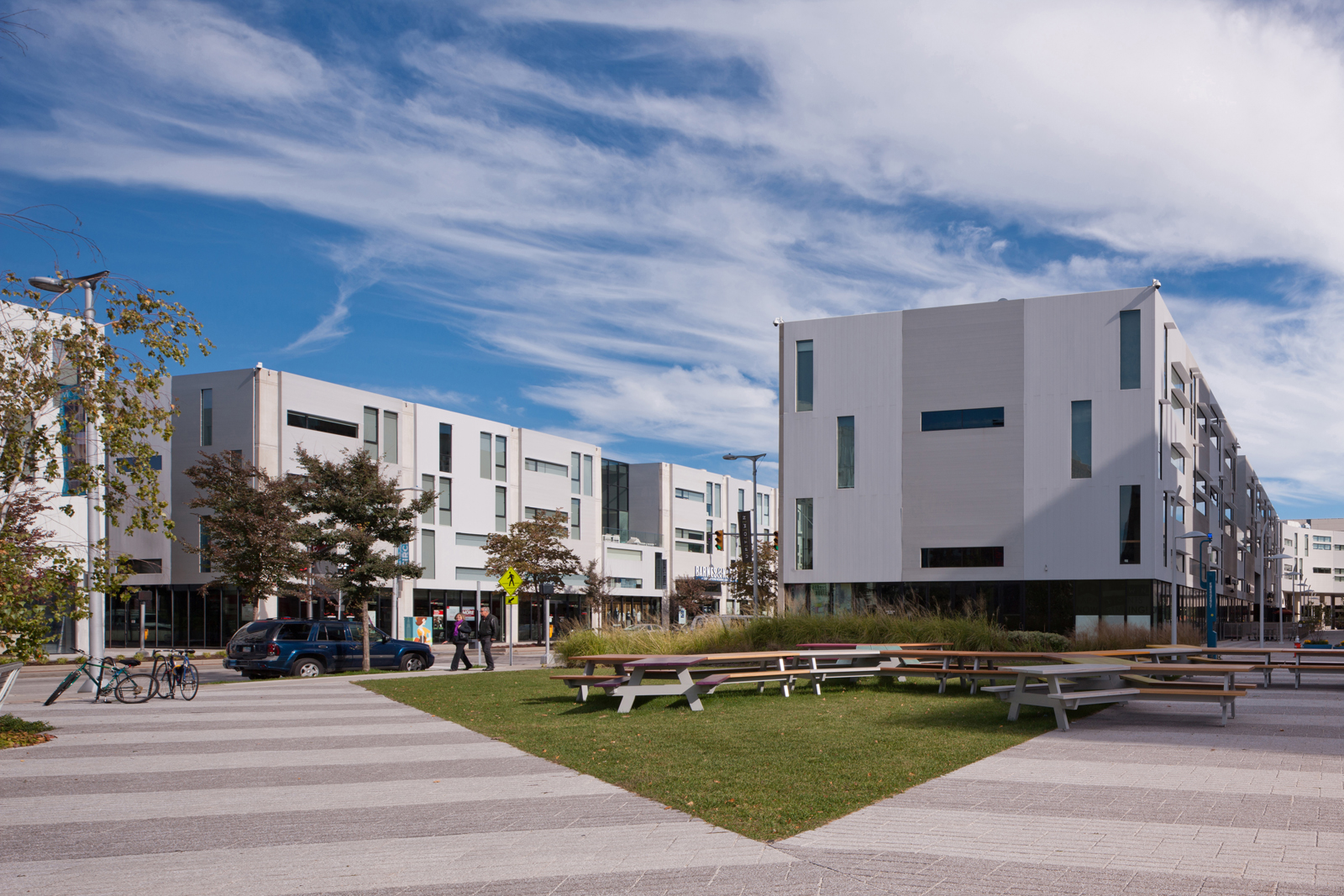 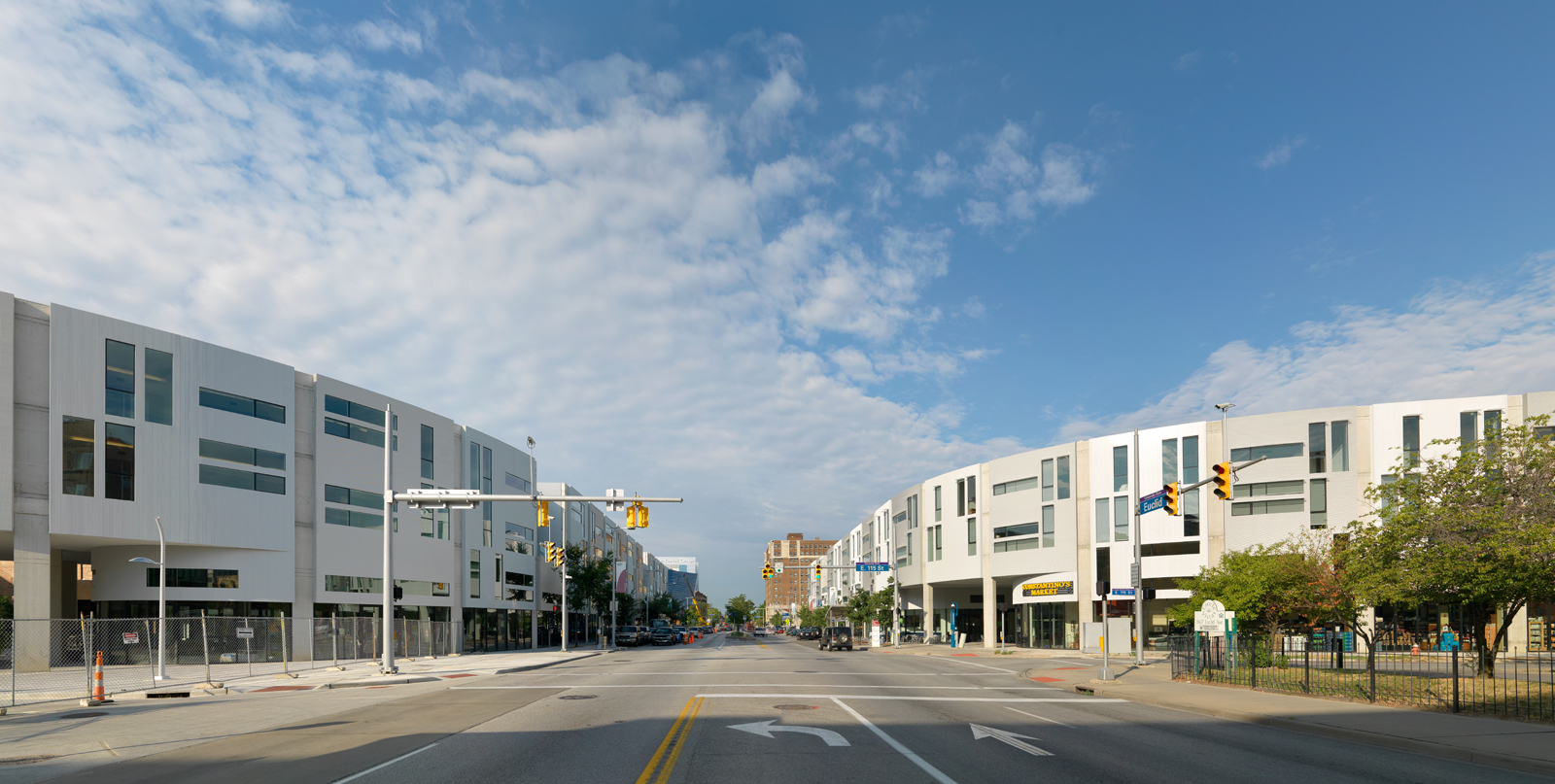 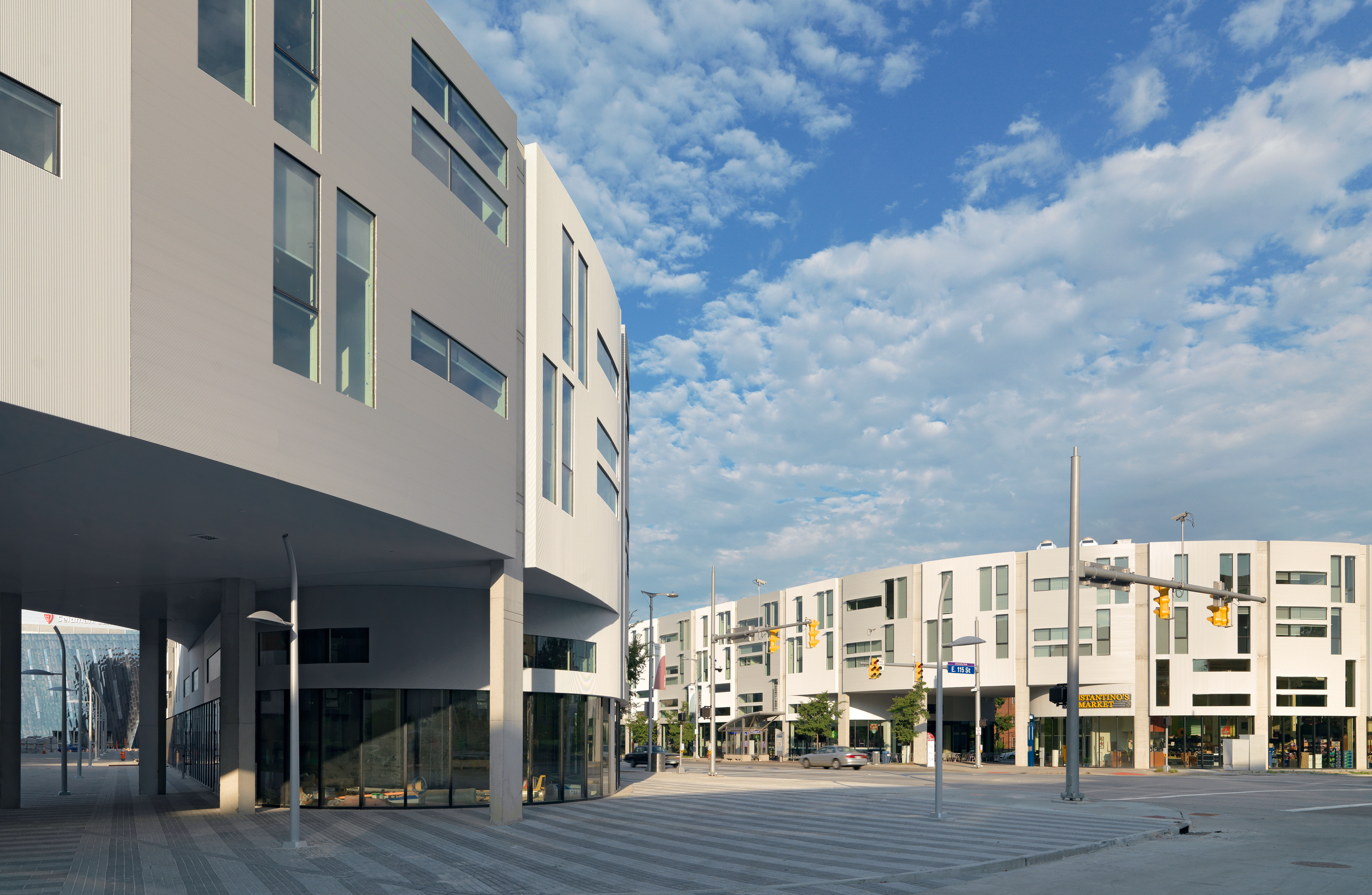 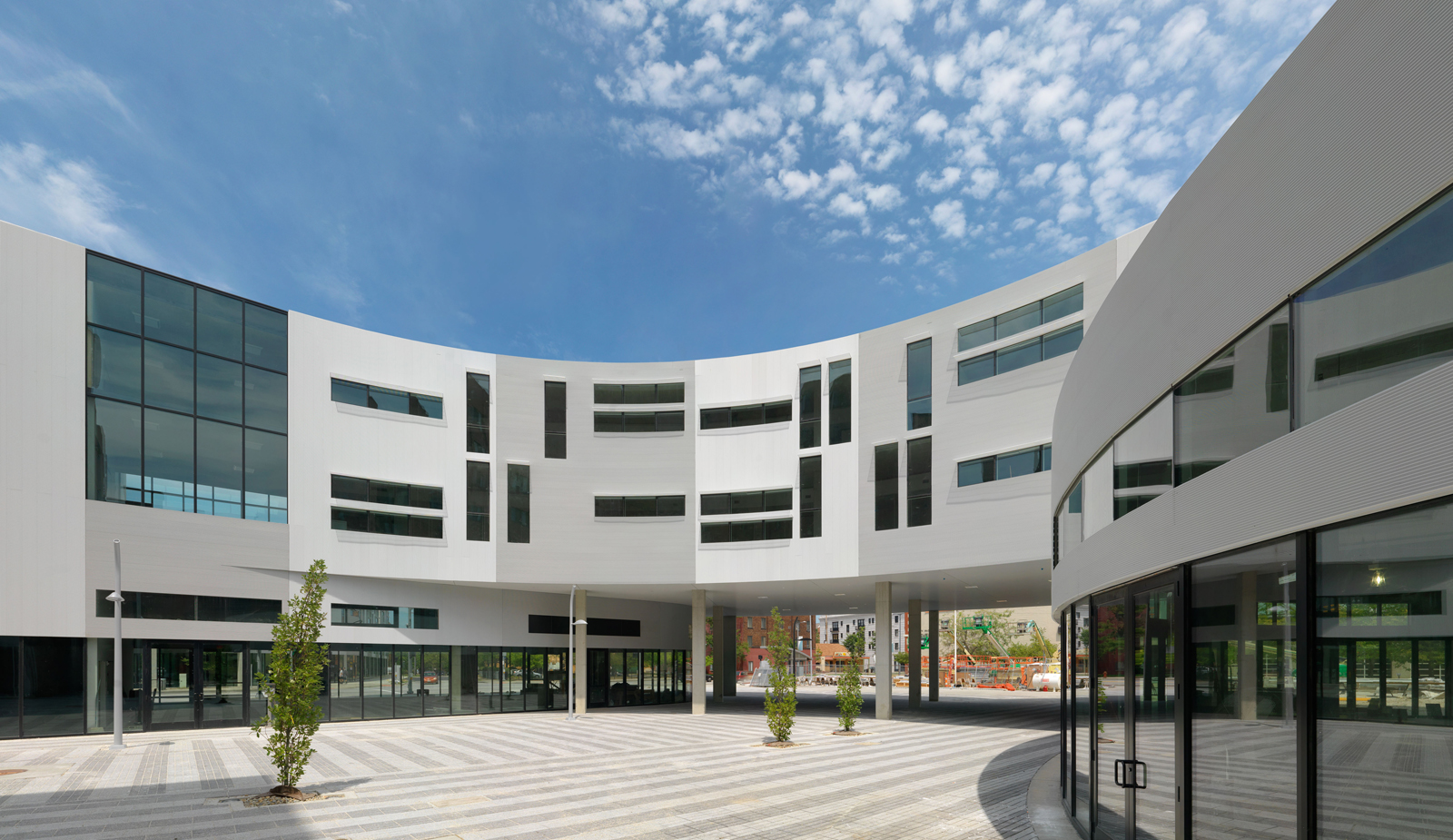 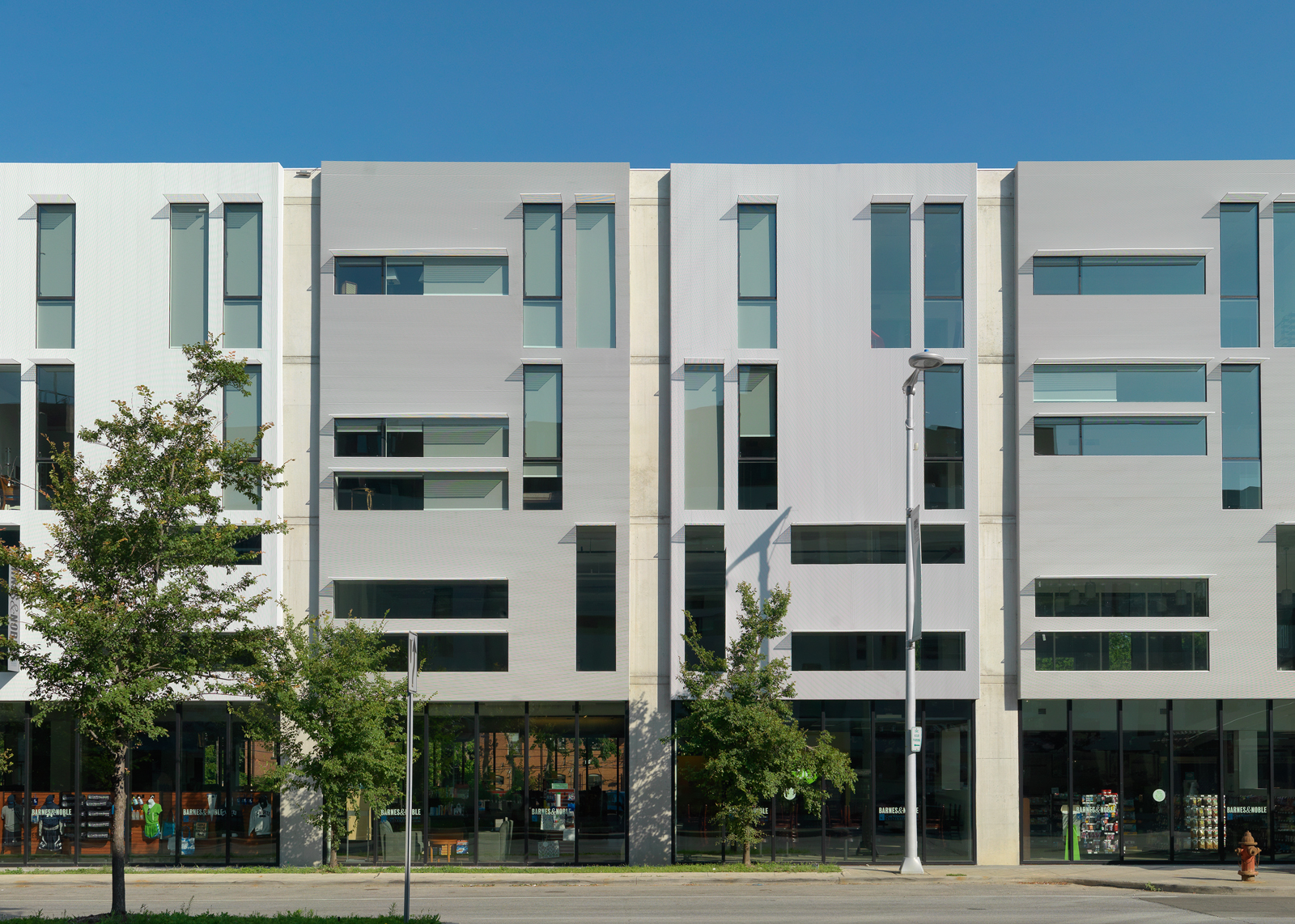 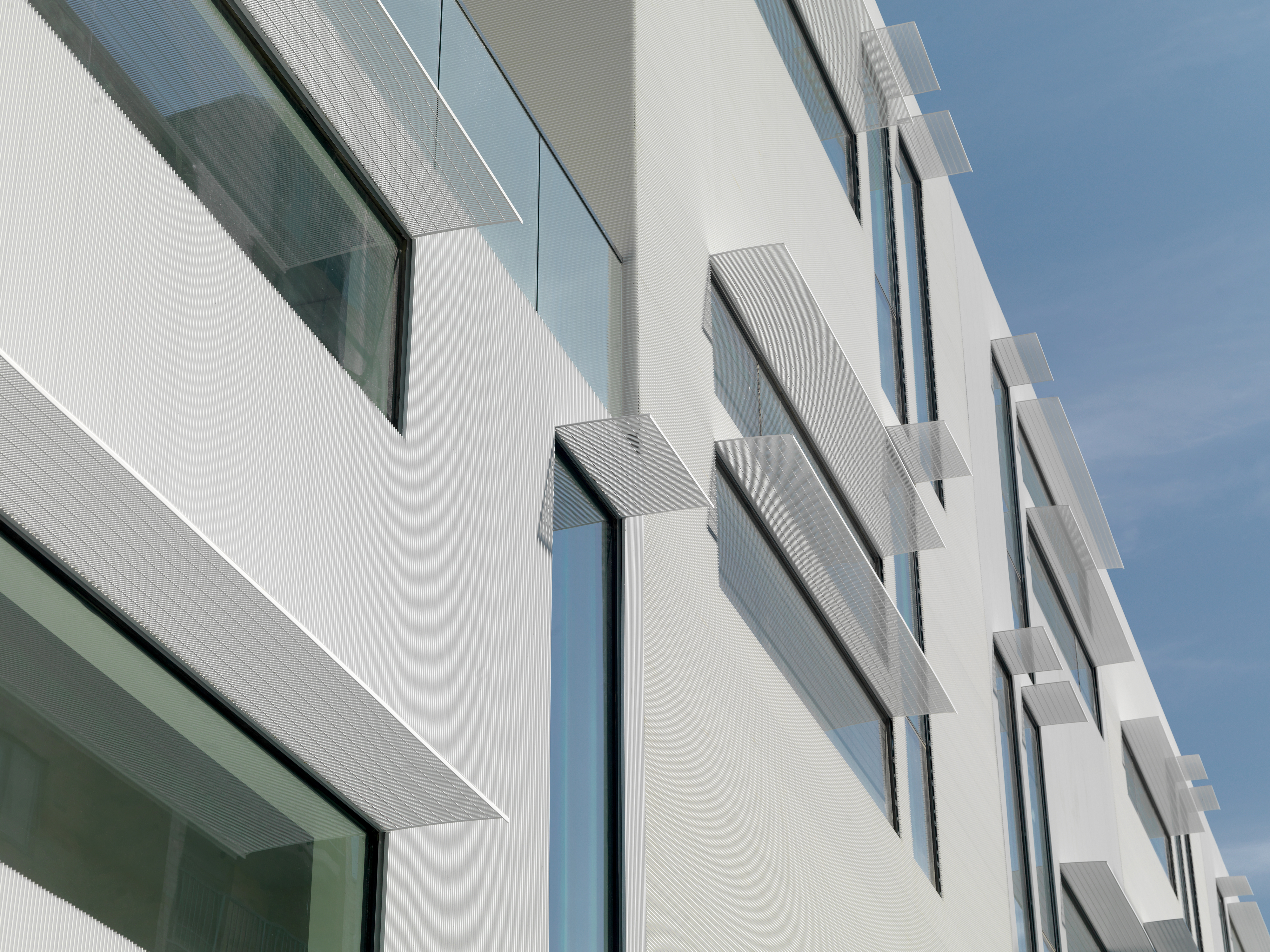 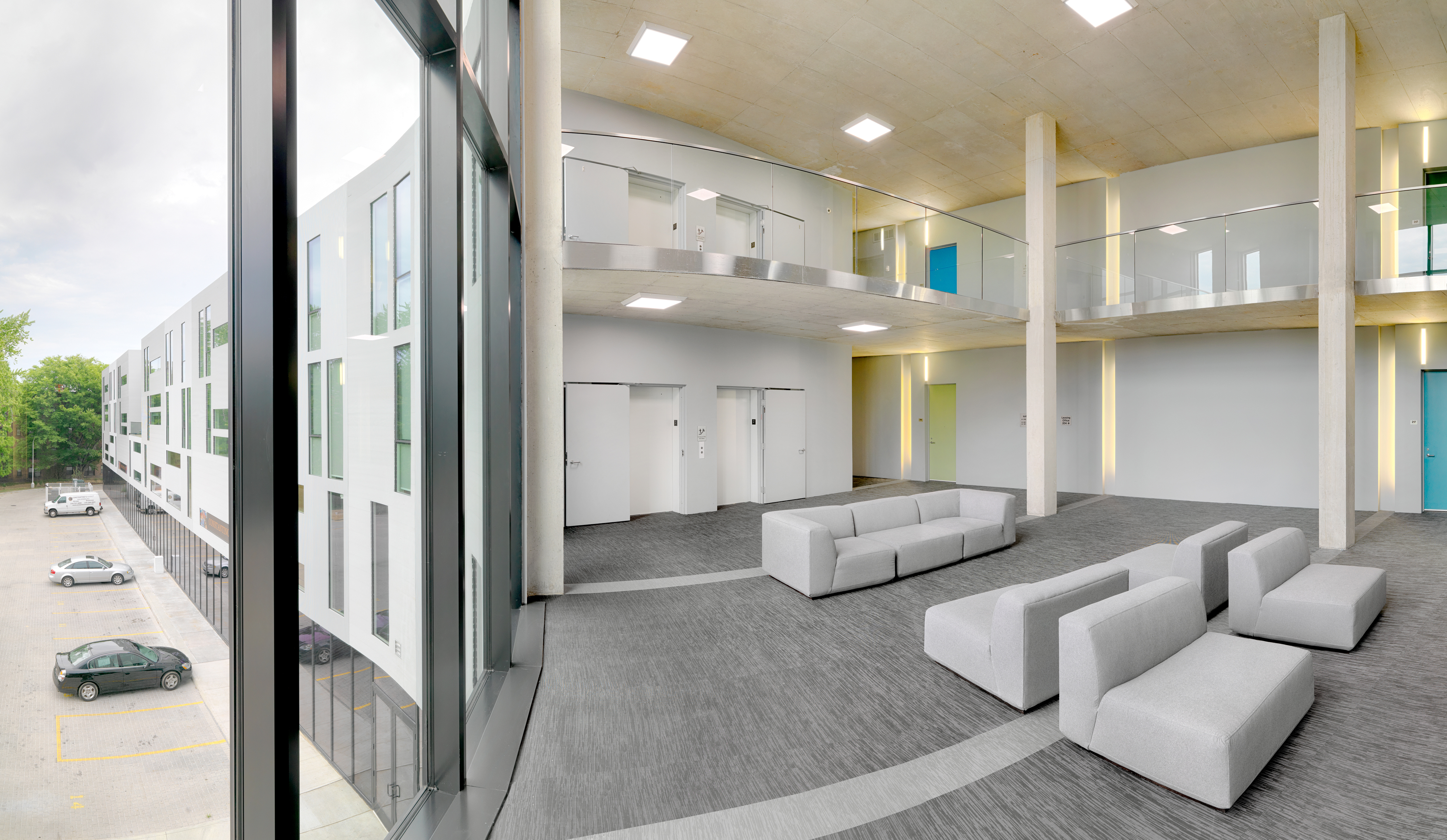 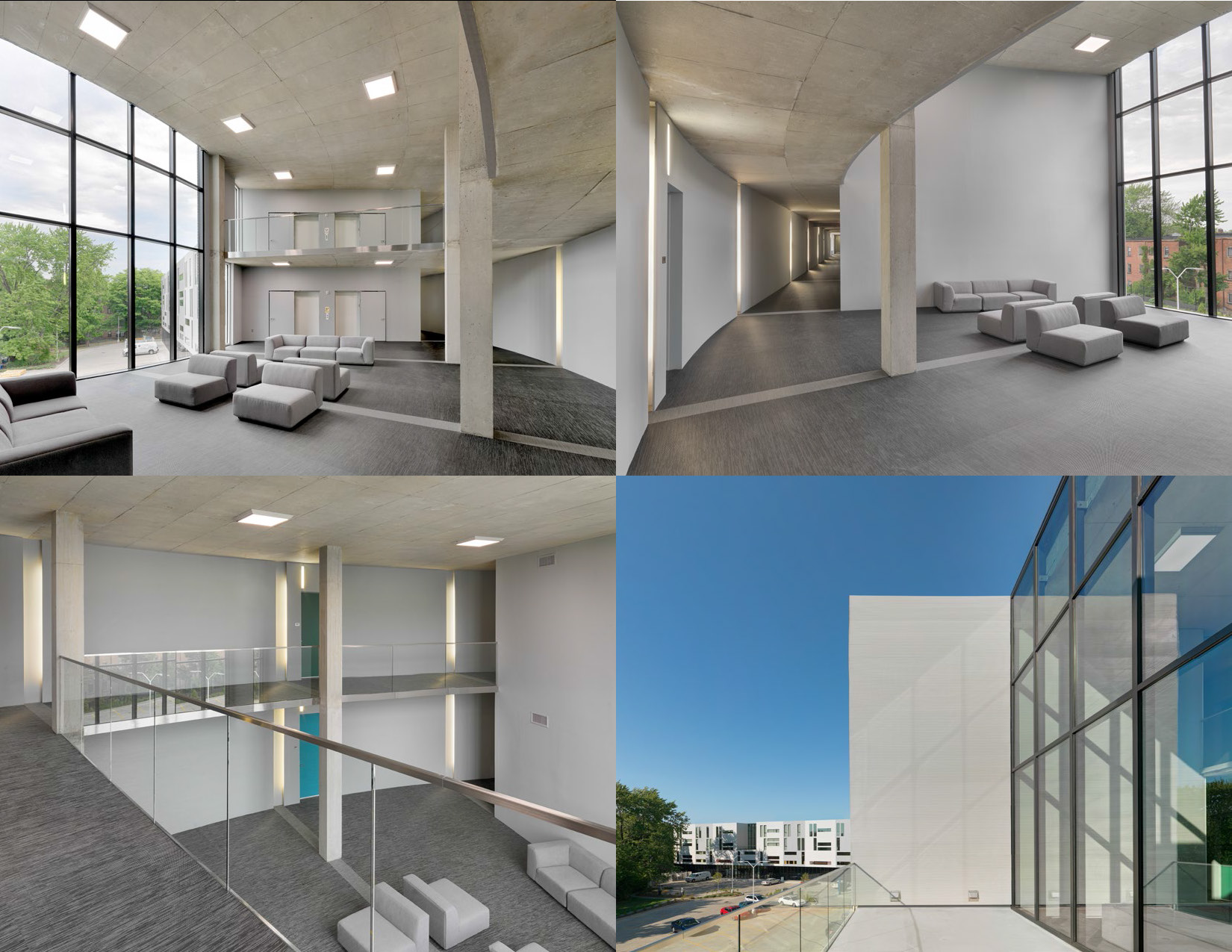 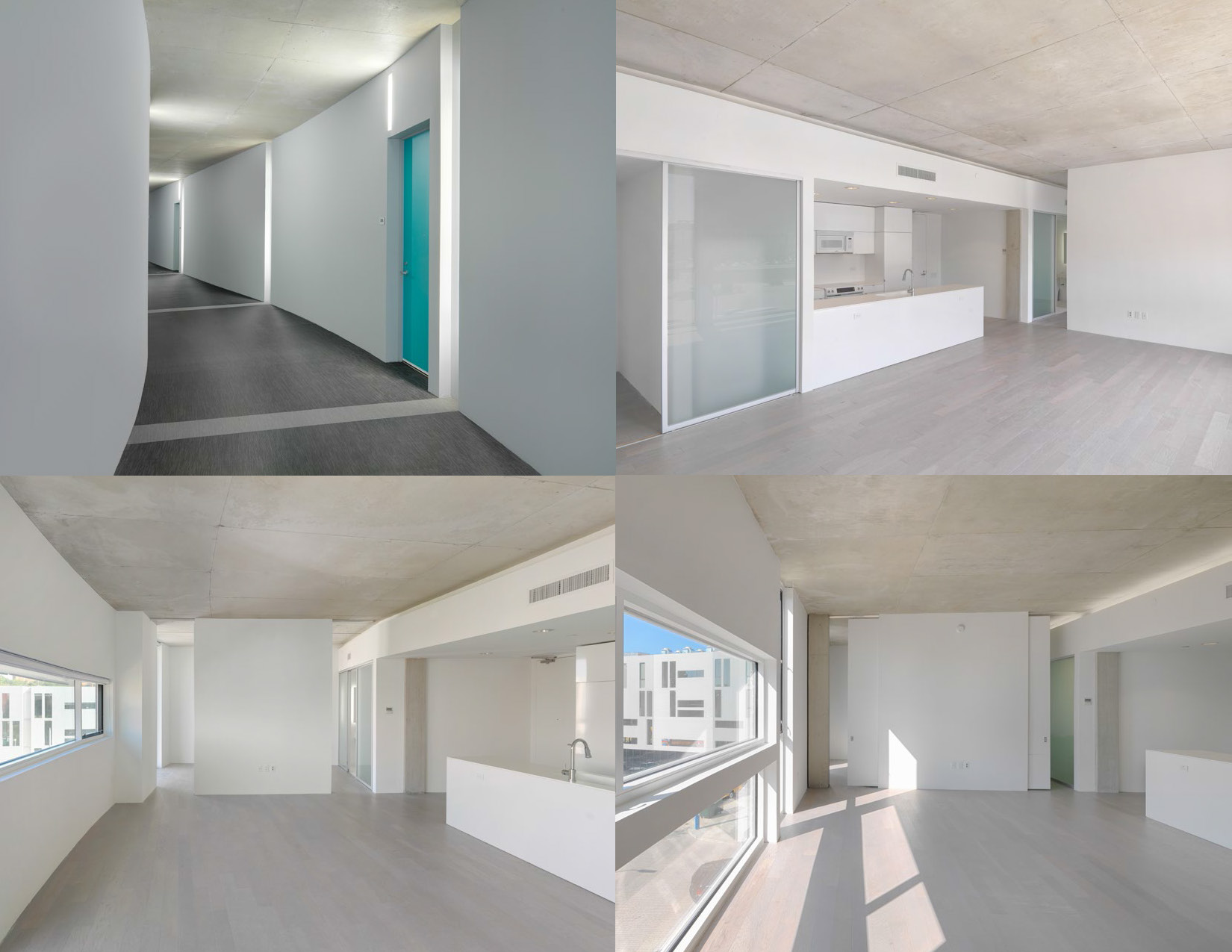 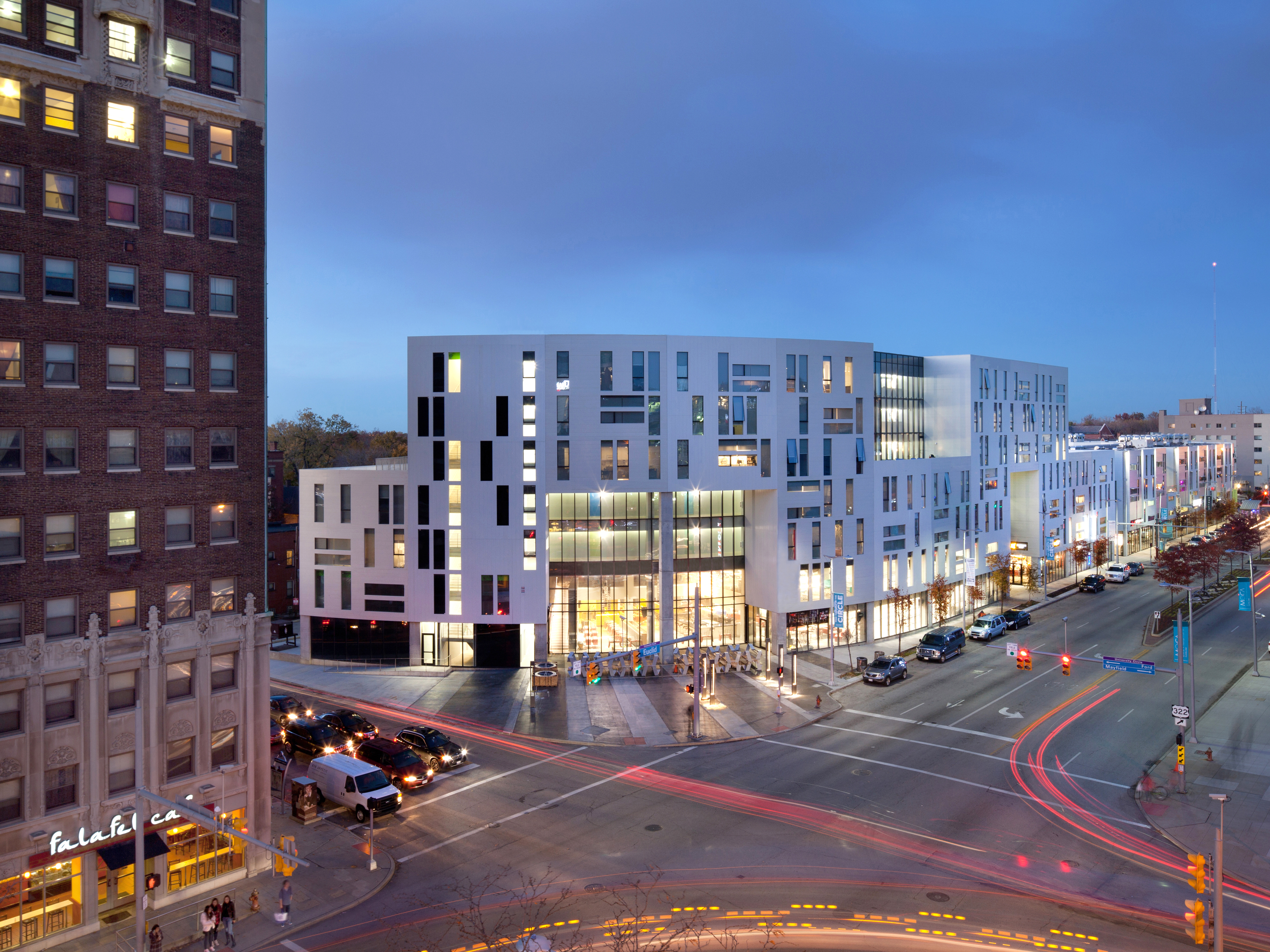 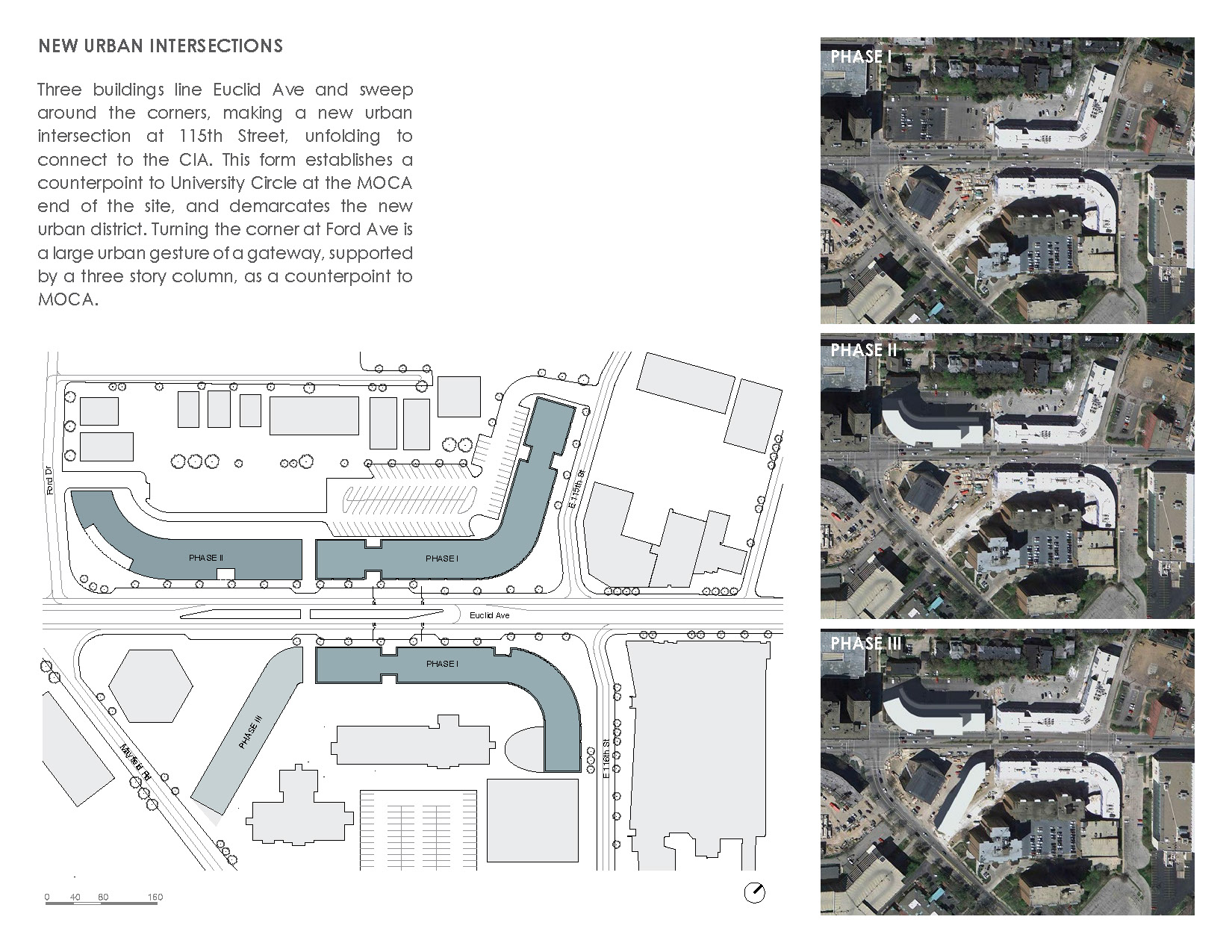 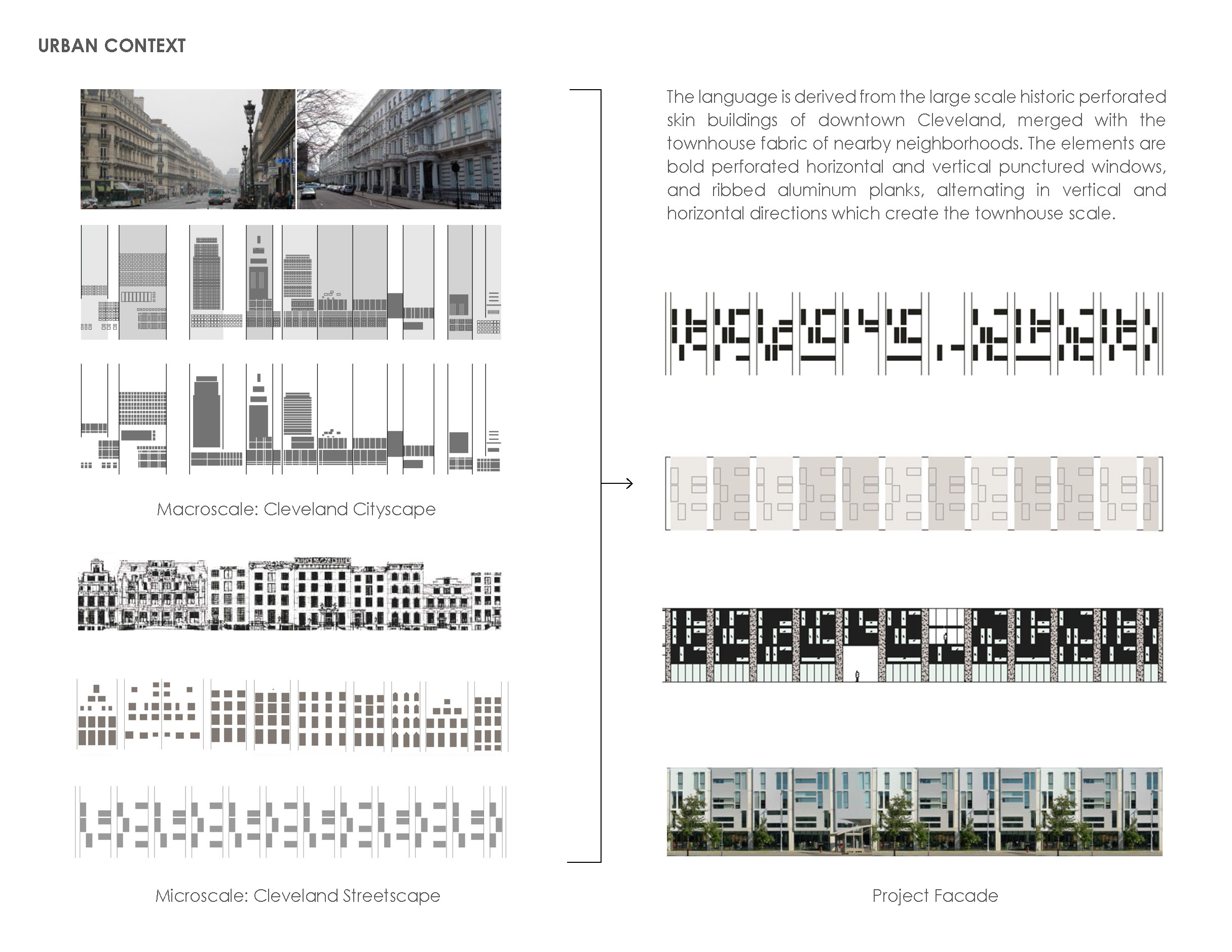 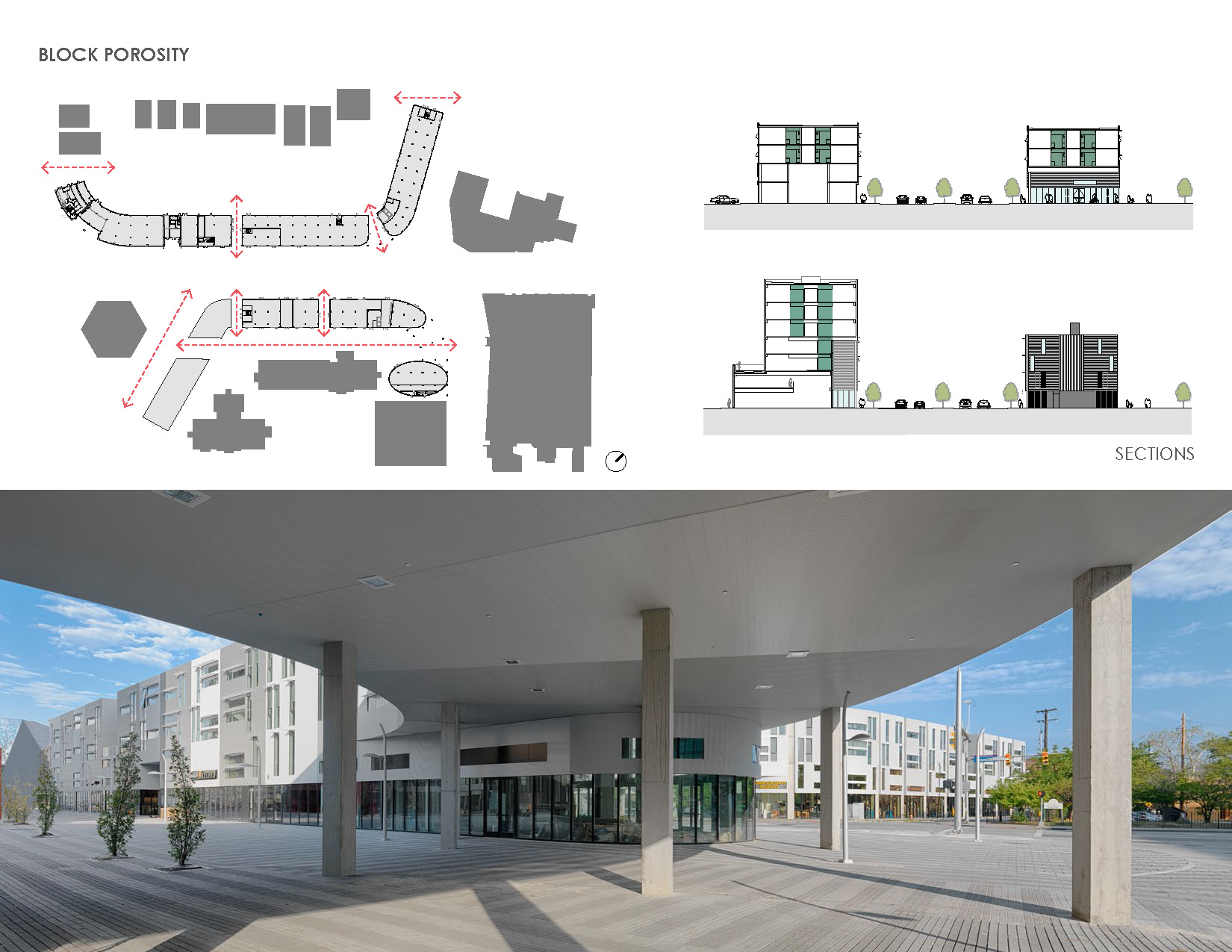 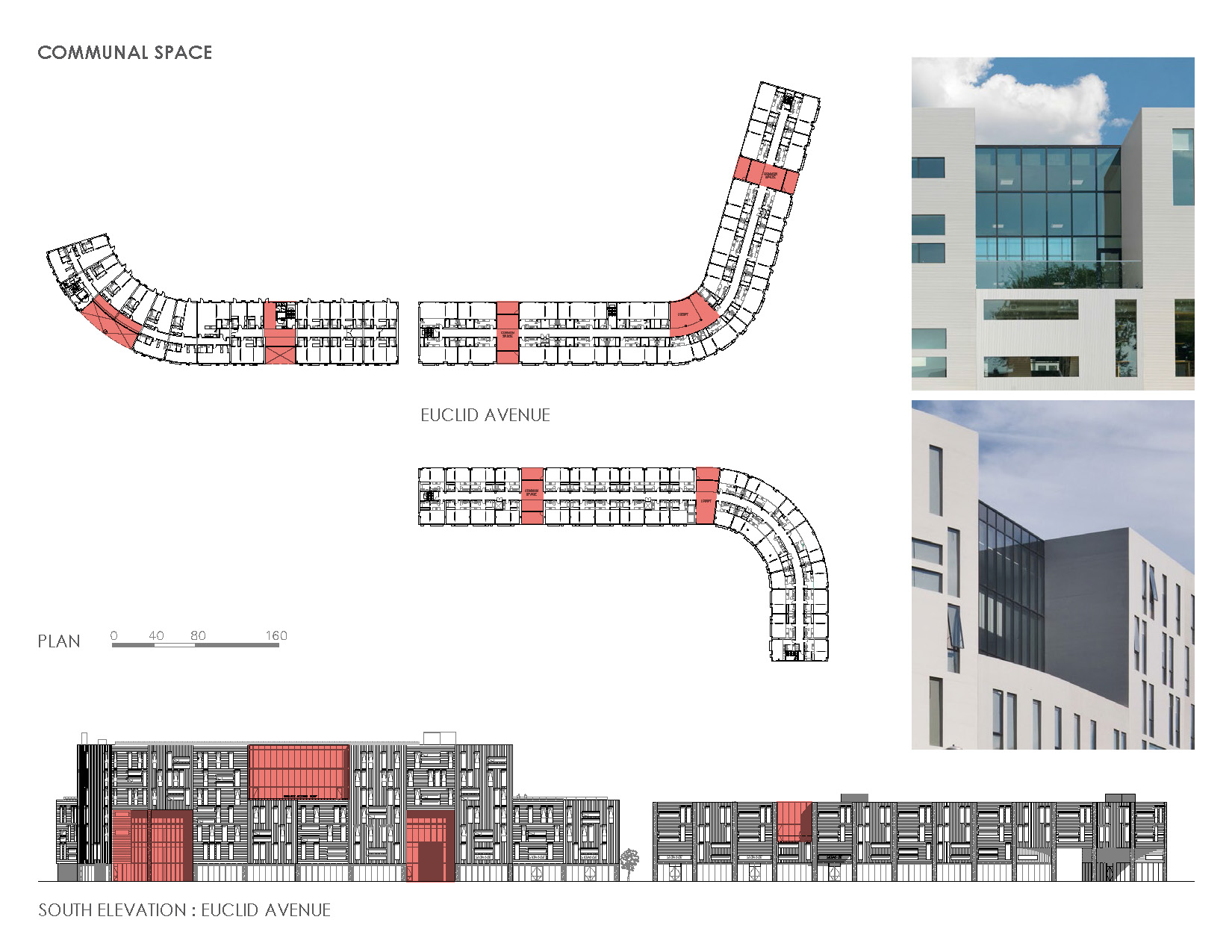 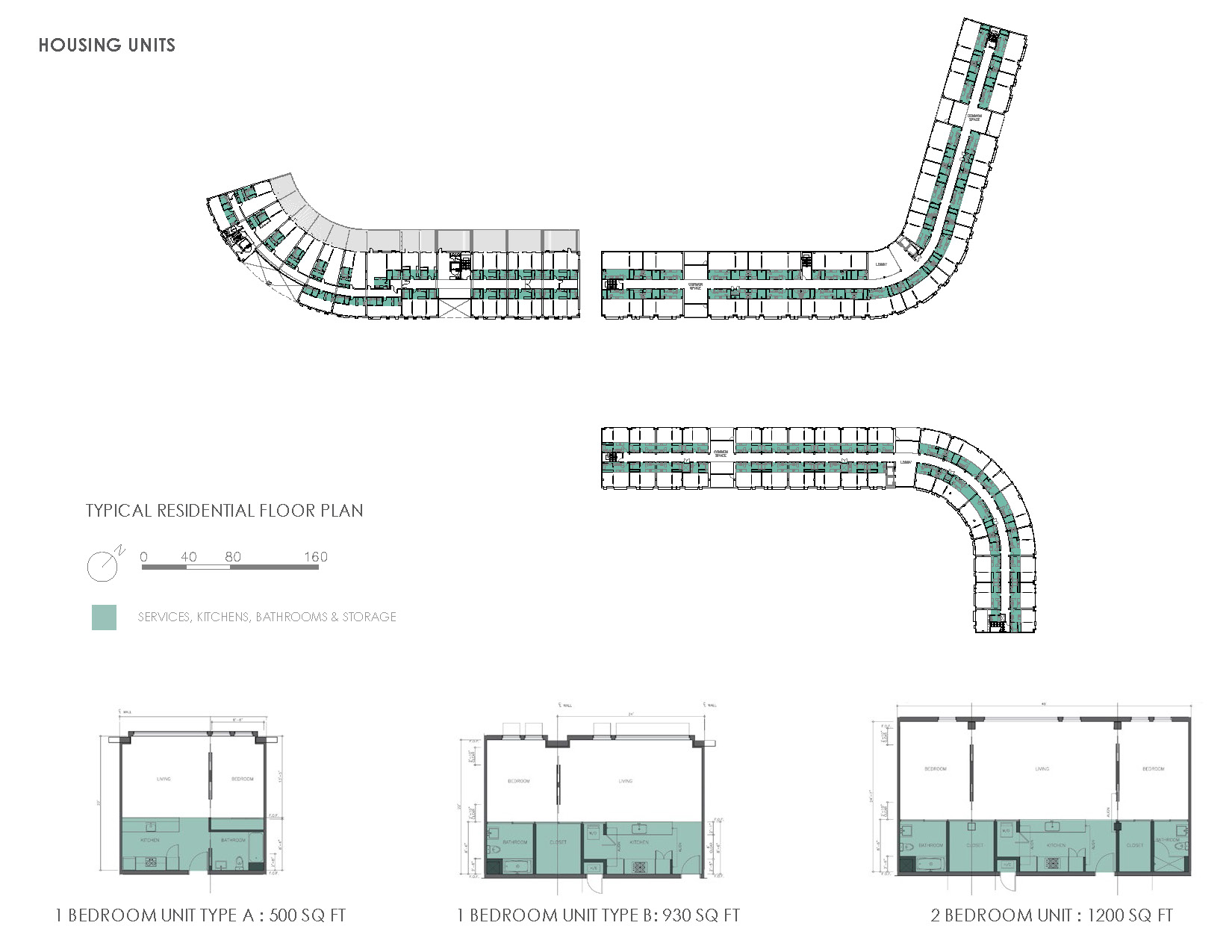 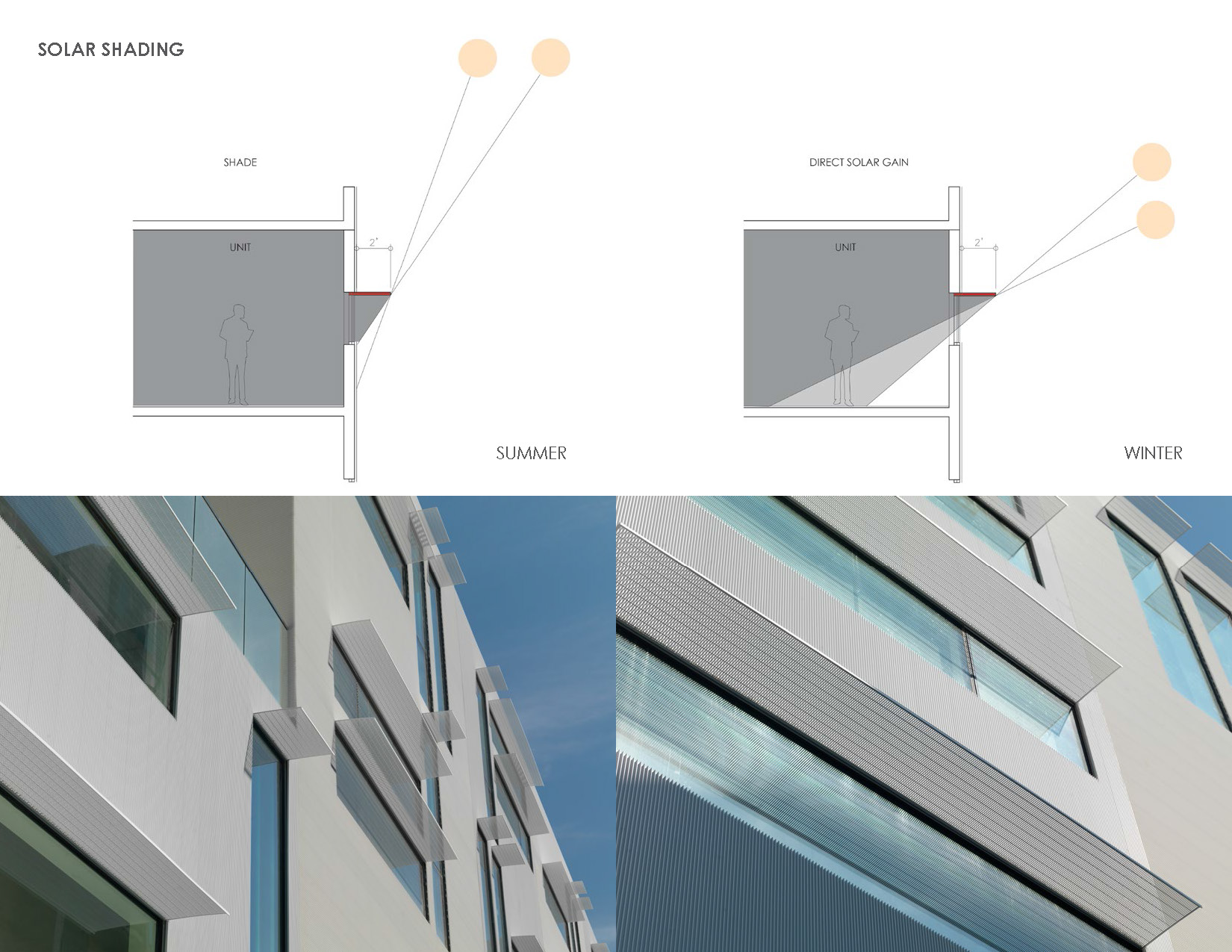 Uptown in Cleveland is the creation of a new center, a main street for Case Western University and Cleveland Clinic.

A segment of Euclid Ave between Ford Ave and 115th Street is anchored by two new cultural institutions, MOCA on the west and CIA on the east. Linking these two pivots are four new urban fabric buildings that contain commercial, retail and entertainment, with housing above.

Architecture’s role here is to build a piece of city, and a common language and palette of materials repeat on the buildings in the tradition of great cities like Paris and London, where continuous architecture crates the fabric of a district. The language is derived from the large scale historic perforated skin buildings of downtown Cleveland, merged with the townhouse fabric of nearby neighborhoods. The elements are bold perforated horizontal and vertical punctured windows, and ribbed aluminum planks, alternating in vertical and horizontal directions which create the townhouse scale.

Two completed buildings line Euclid Ave and sweep around the corners, making a new urban intersection at 115th Street, unfolding to connect to the CIA. This form establishes a counterpoint to University Circle at the MOCA end of the site, and demarcates the new urban district, Uptown.

The building on the south side of Euclid Ave has commercial space lining the street, with parking on two levels at the rear. The commercial space houses a Barnes and Noble Bookstore, the entry lobby to the residences above is at a gateway which perforates the slab, and a grocery store which wraps around the corner onto 115th Street. Above are residences. Numerous types, ranging from one to three bedroom units, are structured in layers. From a double loaded central hallway, service bars are established on either side, connected to the habitable spaces on the outer walls. Three common area courtyards puncture the perforated façade.

Across the street is a complimentary building which forms a pedestrian alley, a new pedestrian street, together with existing CWRU Residence buildings, which have new commercial programs added at their base. The Euclid building is transparent and perforated, with four restaurants which connect the alley to the main street. The functions of the alley focus on food and beverage. This building on the north side of Euclid has student rental apartments, structured in a similar way to the ones across the street, but more compact. Several communal outdoor courts perforate the façade. At the end of the alley a gateway under the buildings connects to entry of CIA.

The commercial bases on both sides of the street are transparent, perforated and light. The façades of the two buildings are gridded and perforated, and recall Downtown Cleveland for Uptown, the new center at the hub of the most vital part of contemporary Cleveland.

Phase ll is twice the height of Phase l, but retains the scale by folding the same architectural elements of perforated aluminum clad walls over three recessed glass voids which are treated as more neutral zones. Turning the corner at Ford Ave is a large urban gesture of a gateway, supported by a three story column, as a counterpoint to MOCA. This section of the building contains Corner Alley Bowling, with market rate apartments above. The other half of the building has restaurants, a bank along Euclid Ave, and student residences for CIA above.