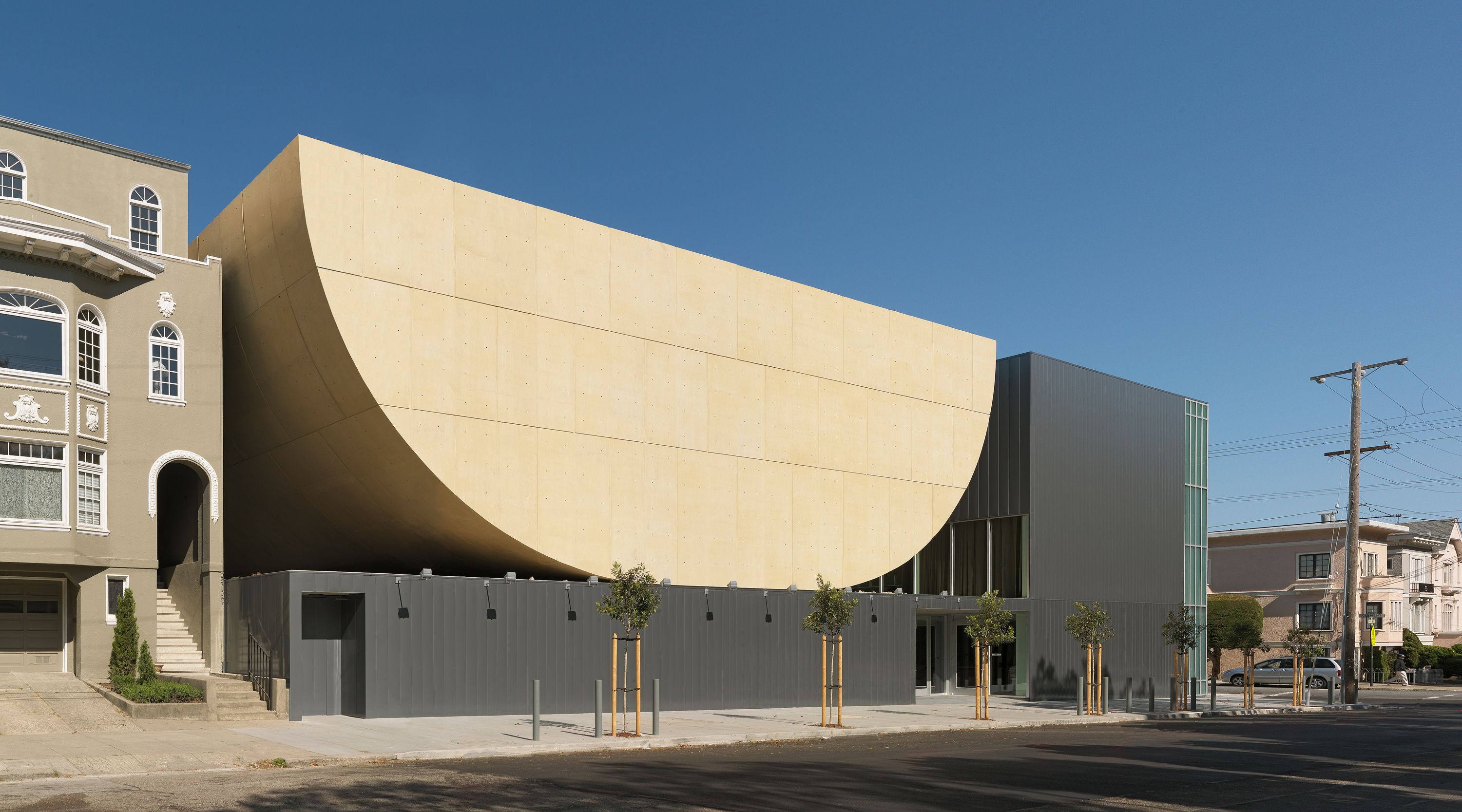 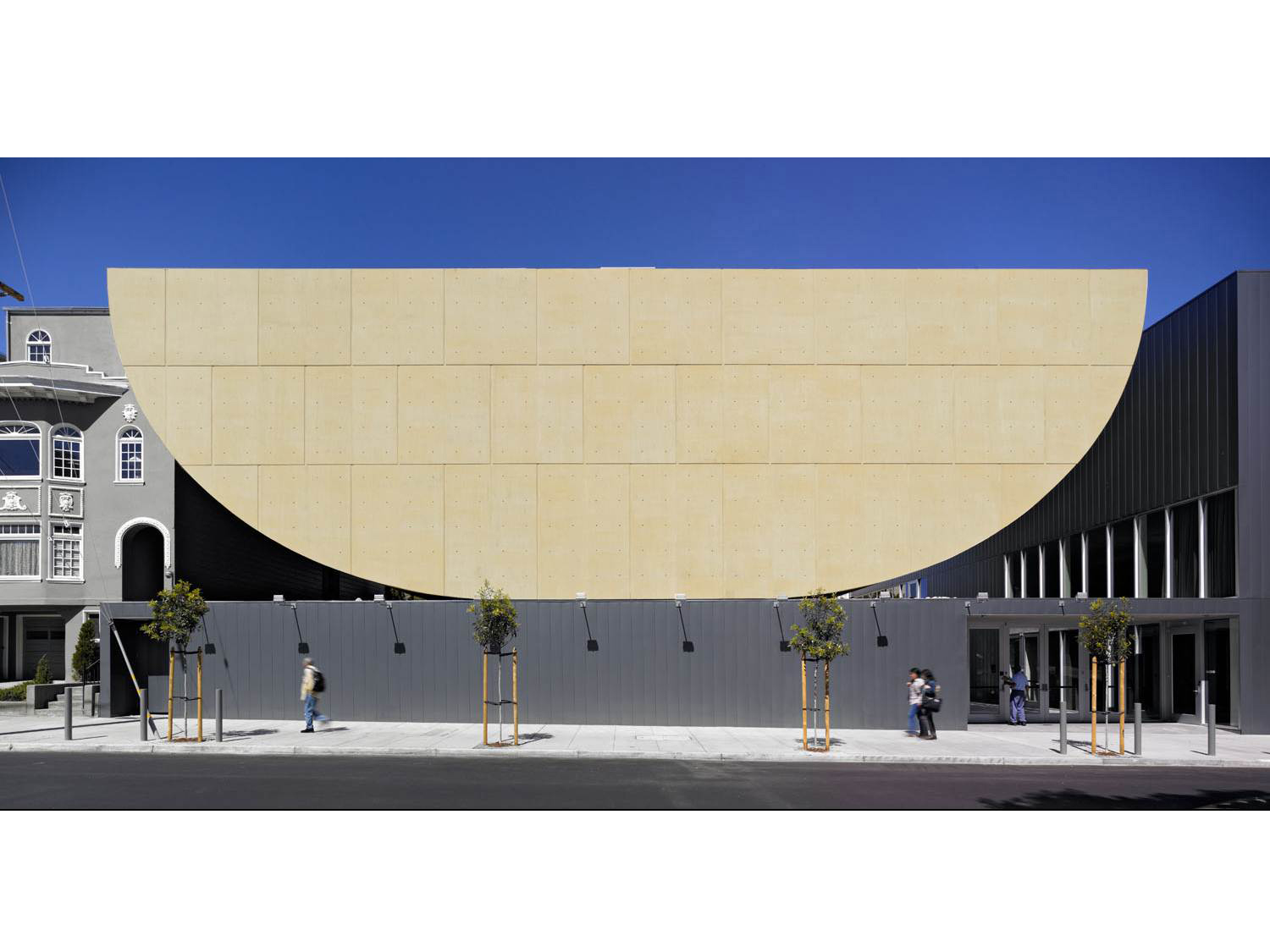 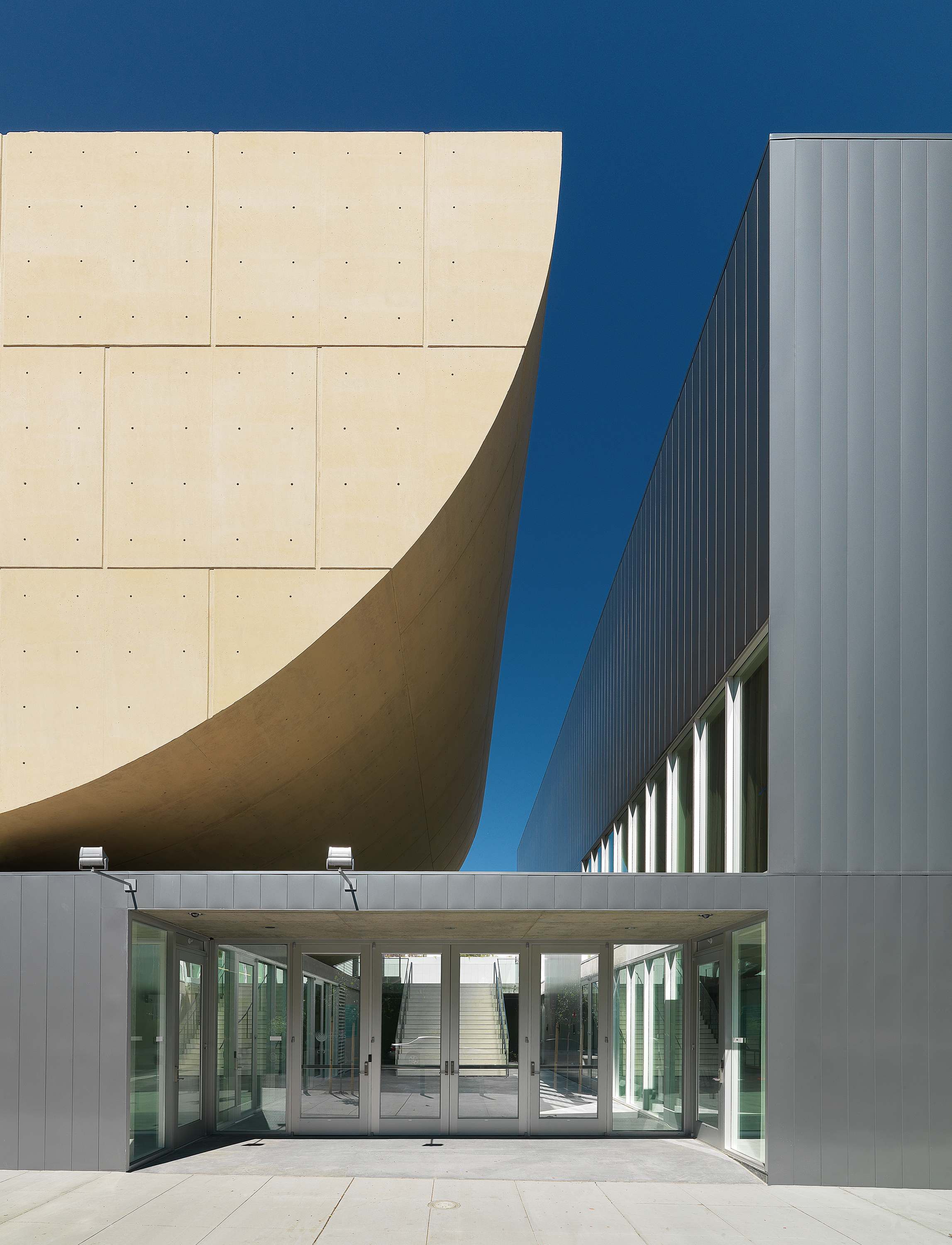 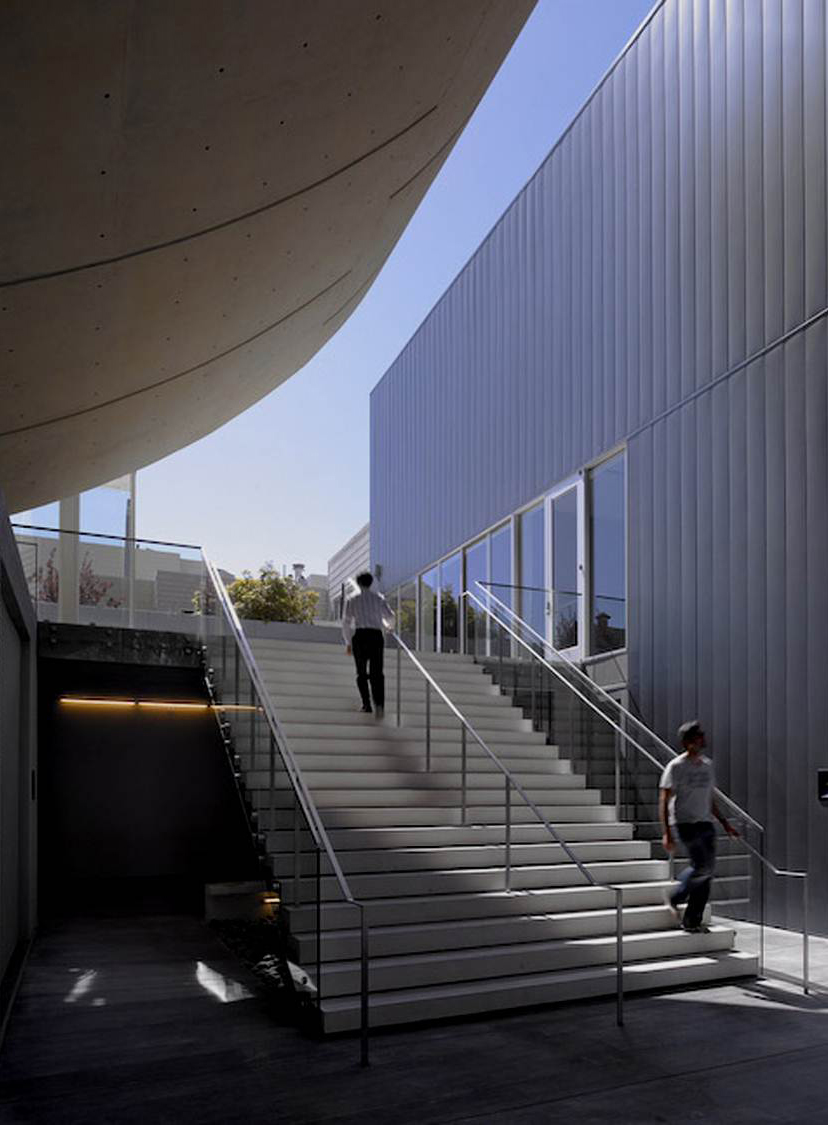 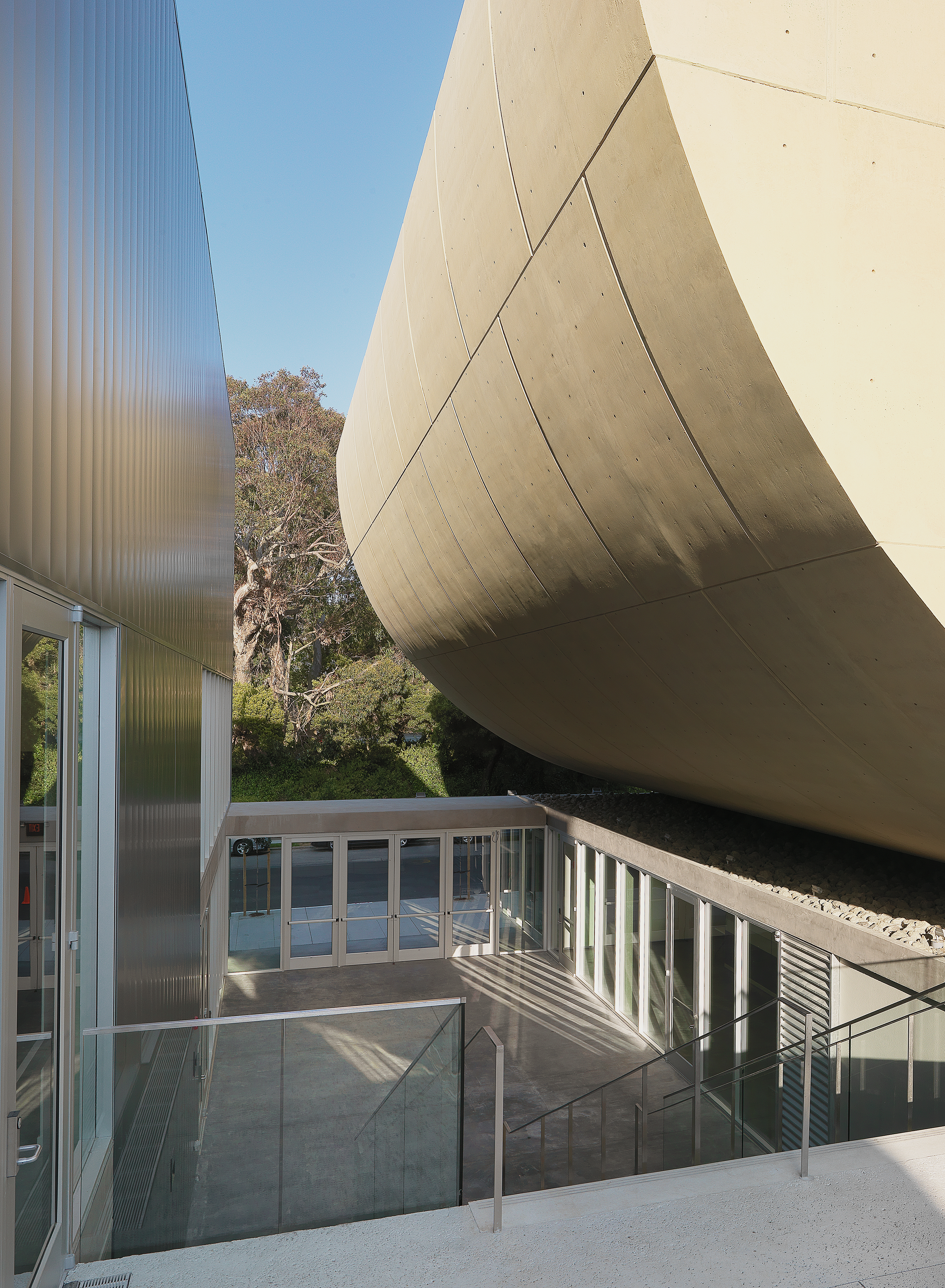 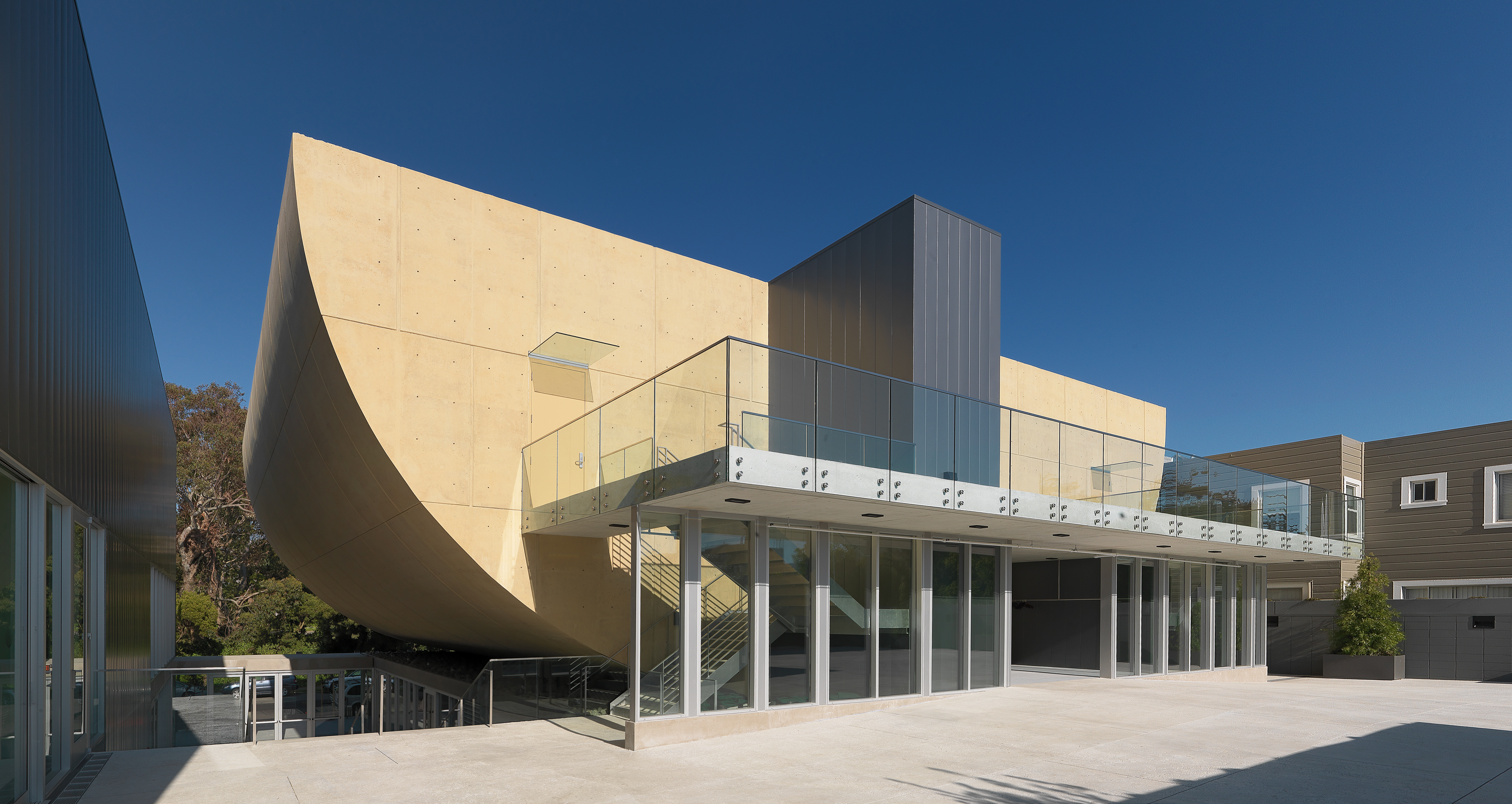 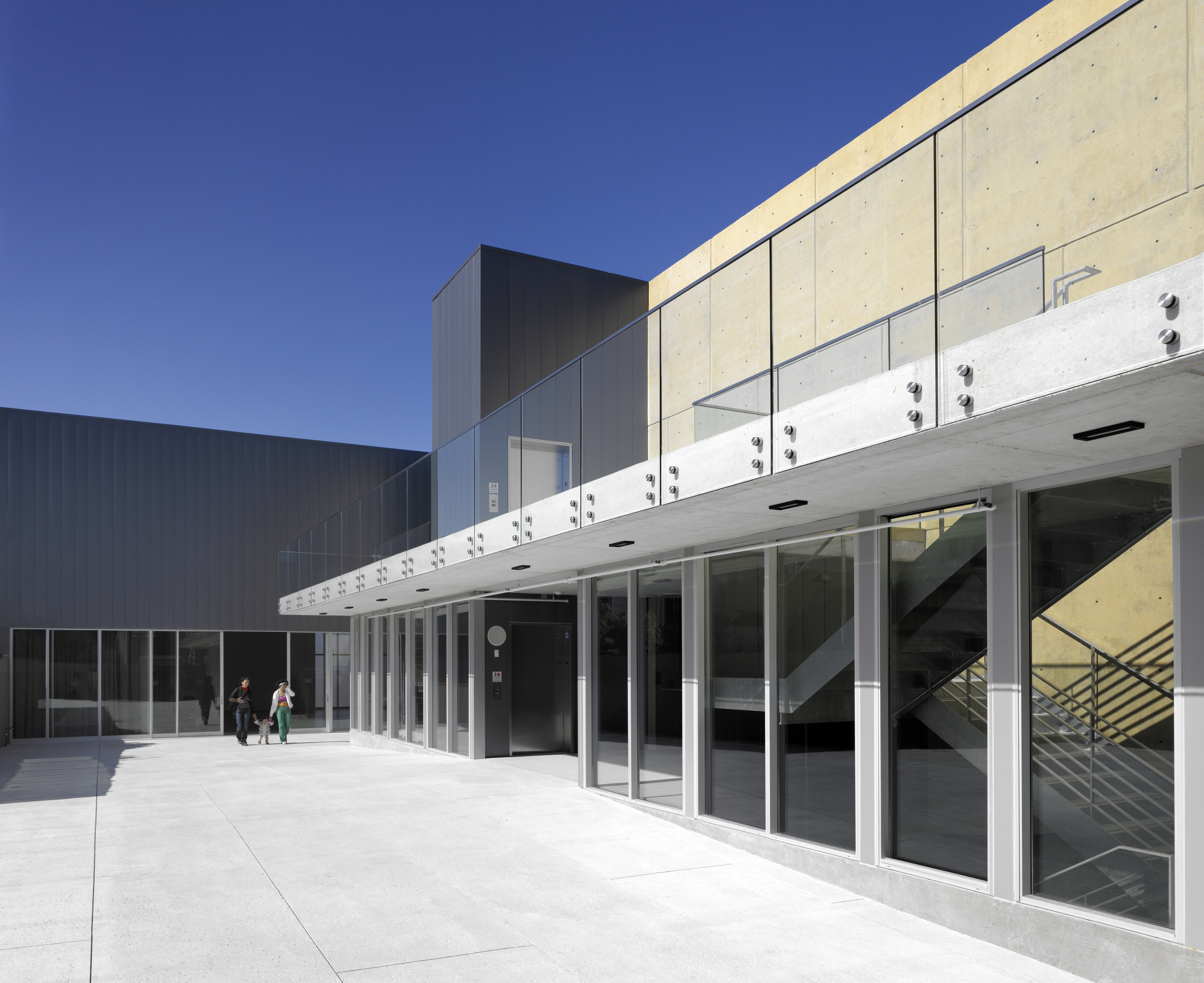 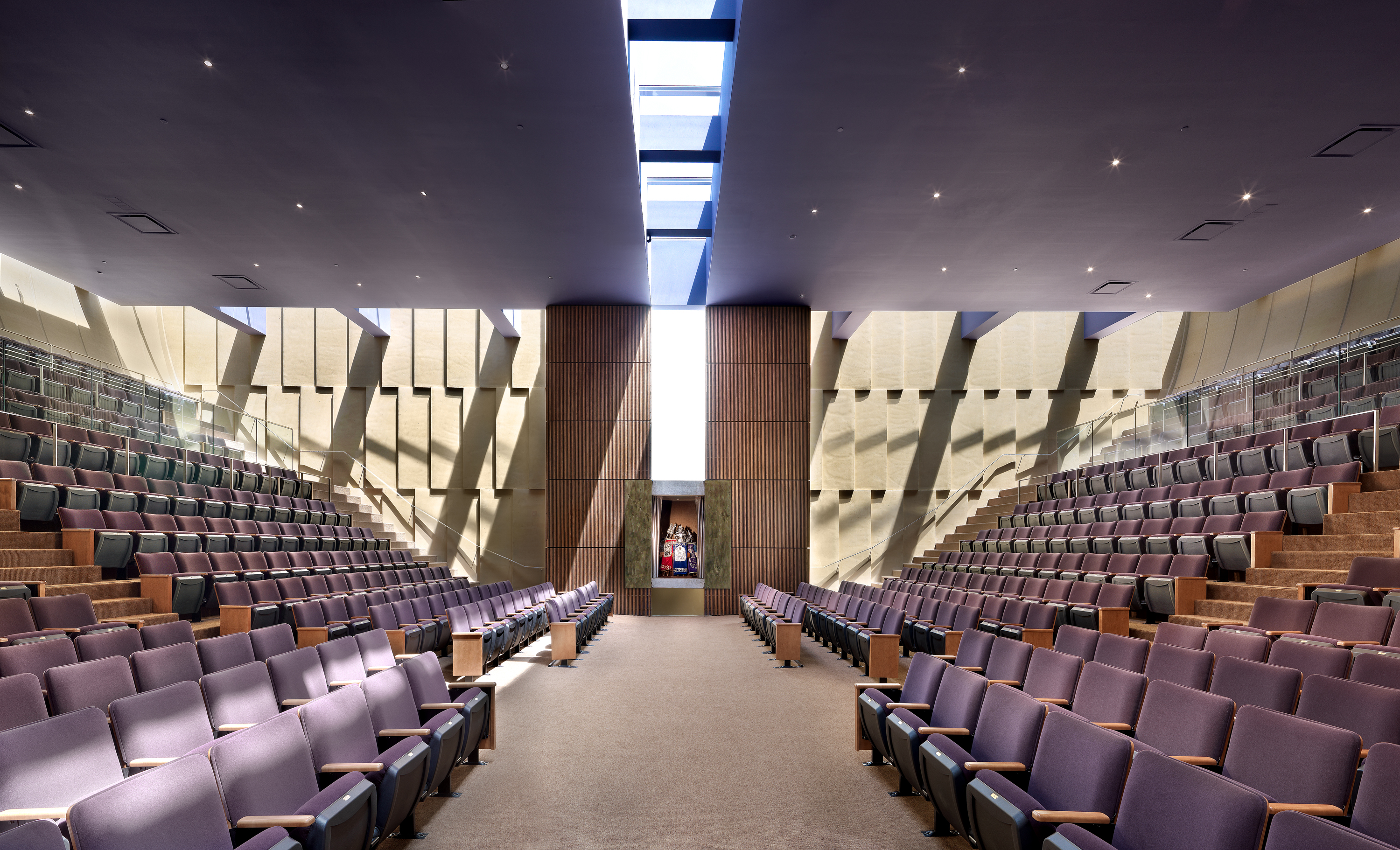 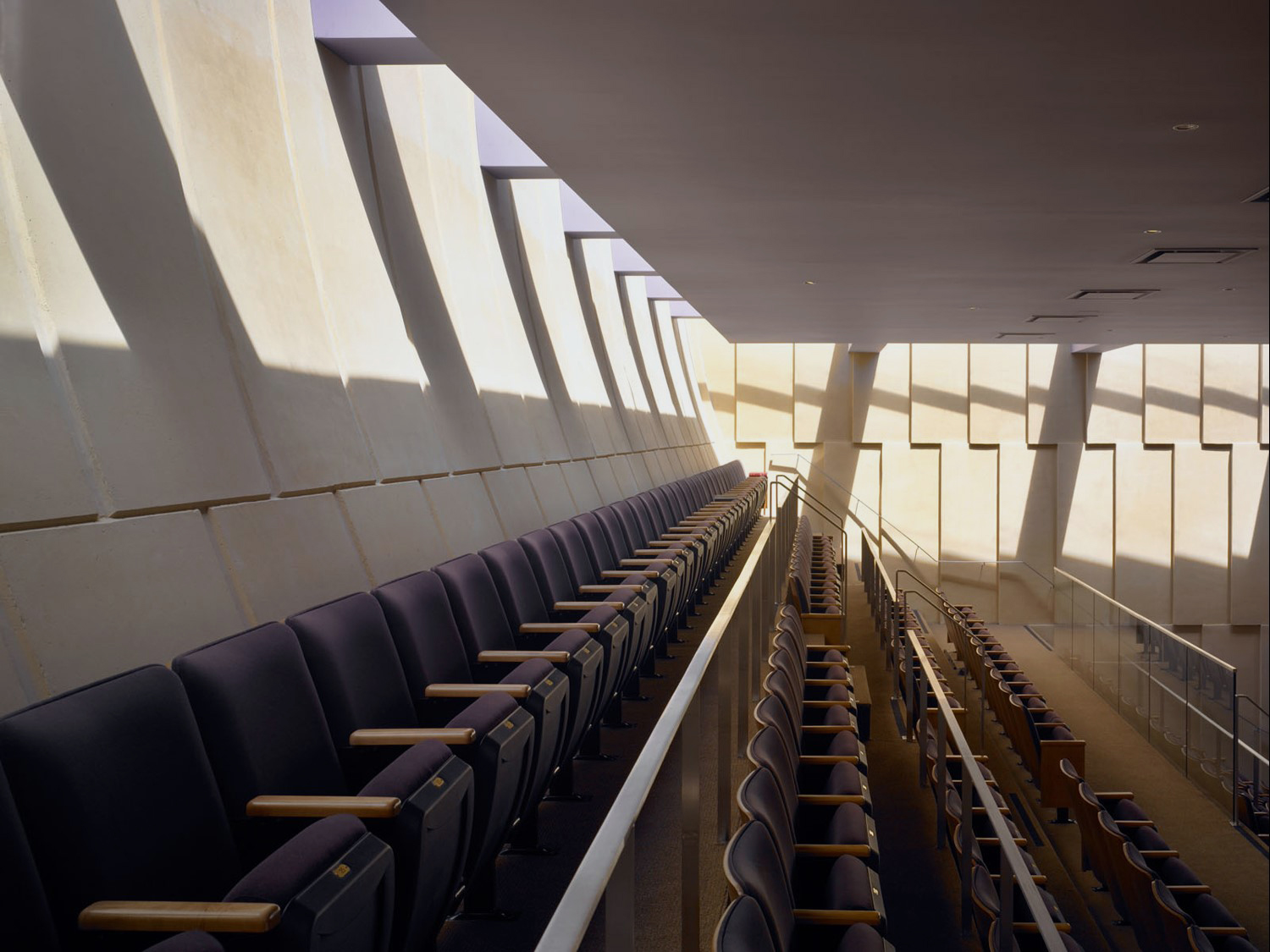 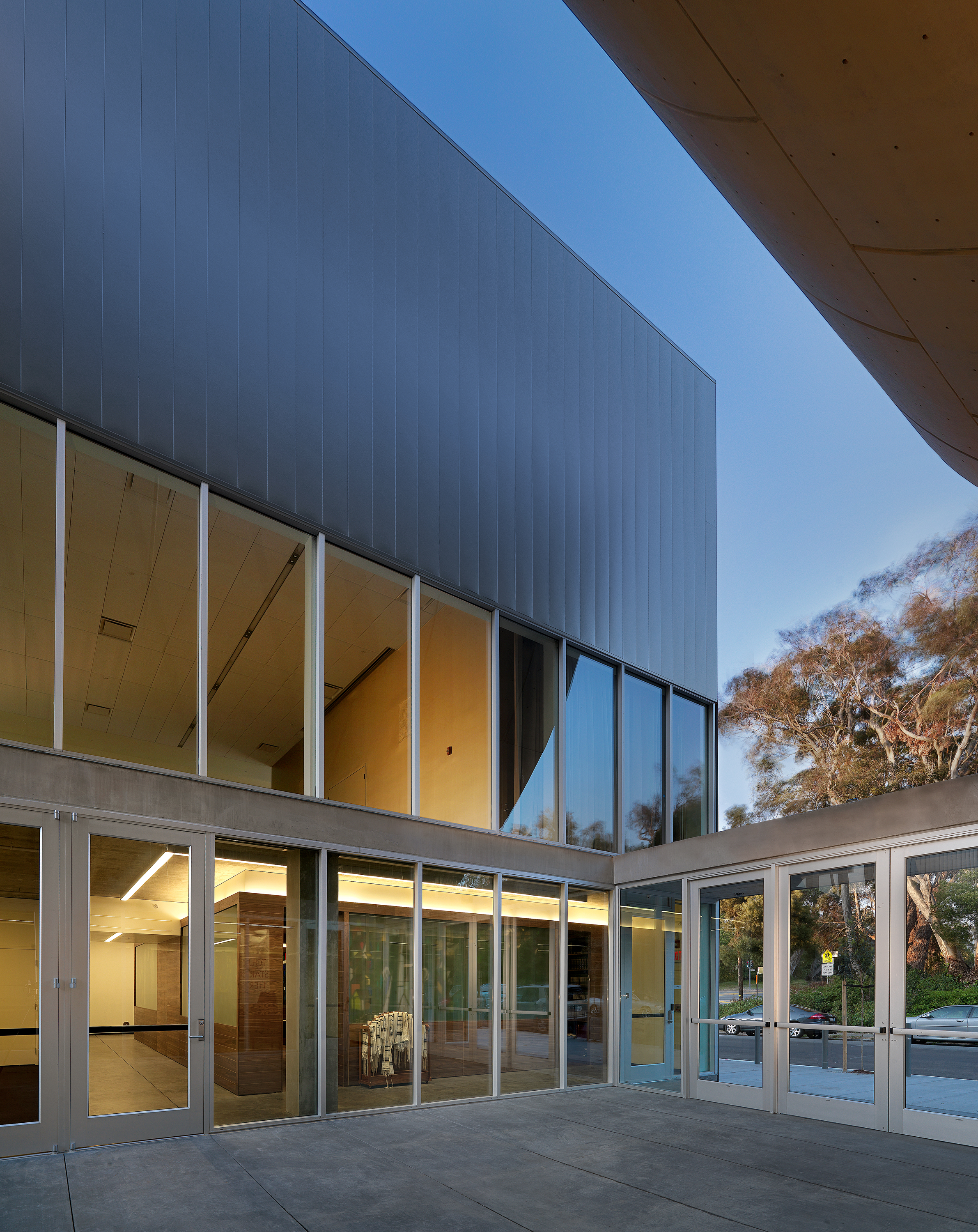 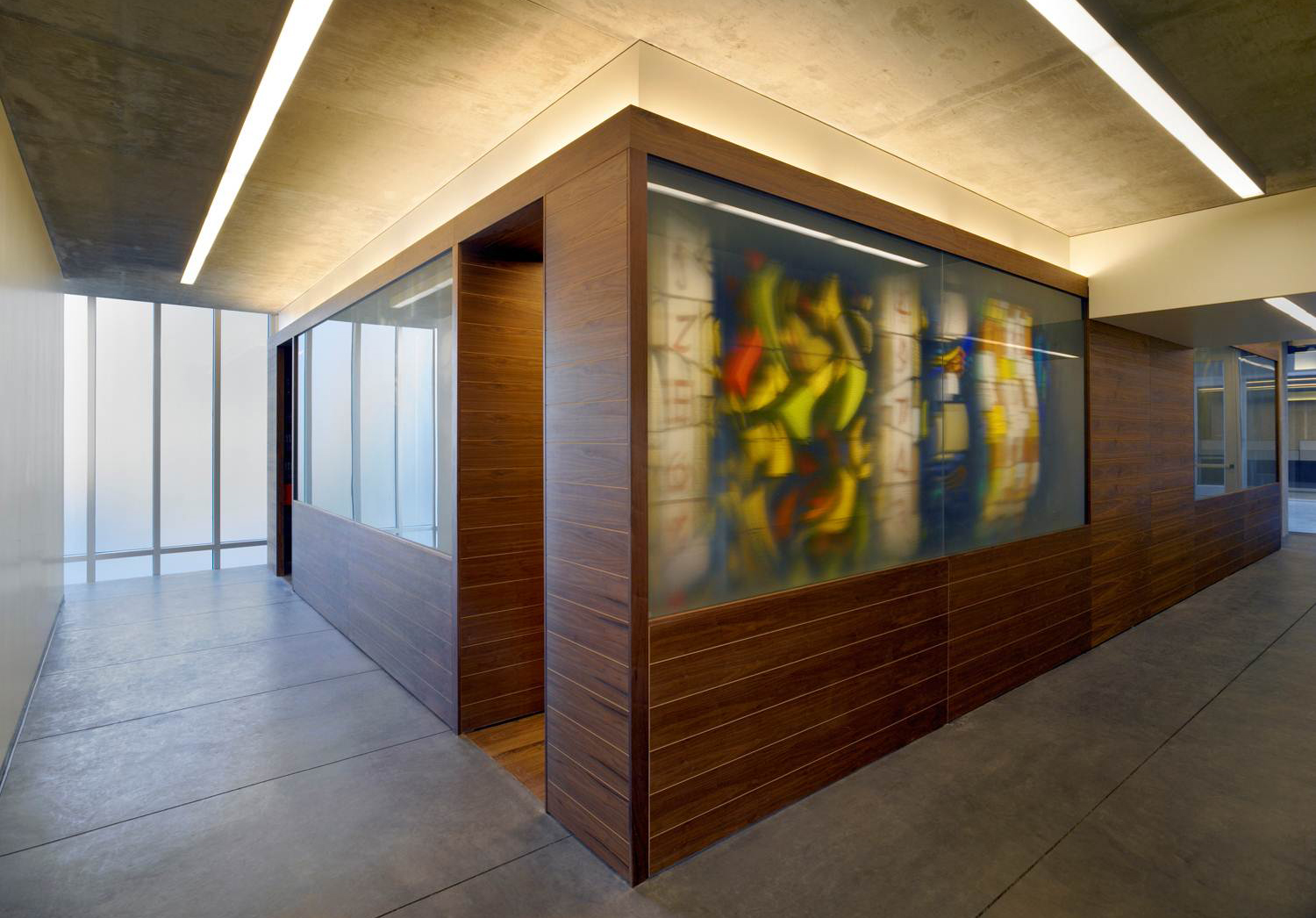 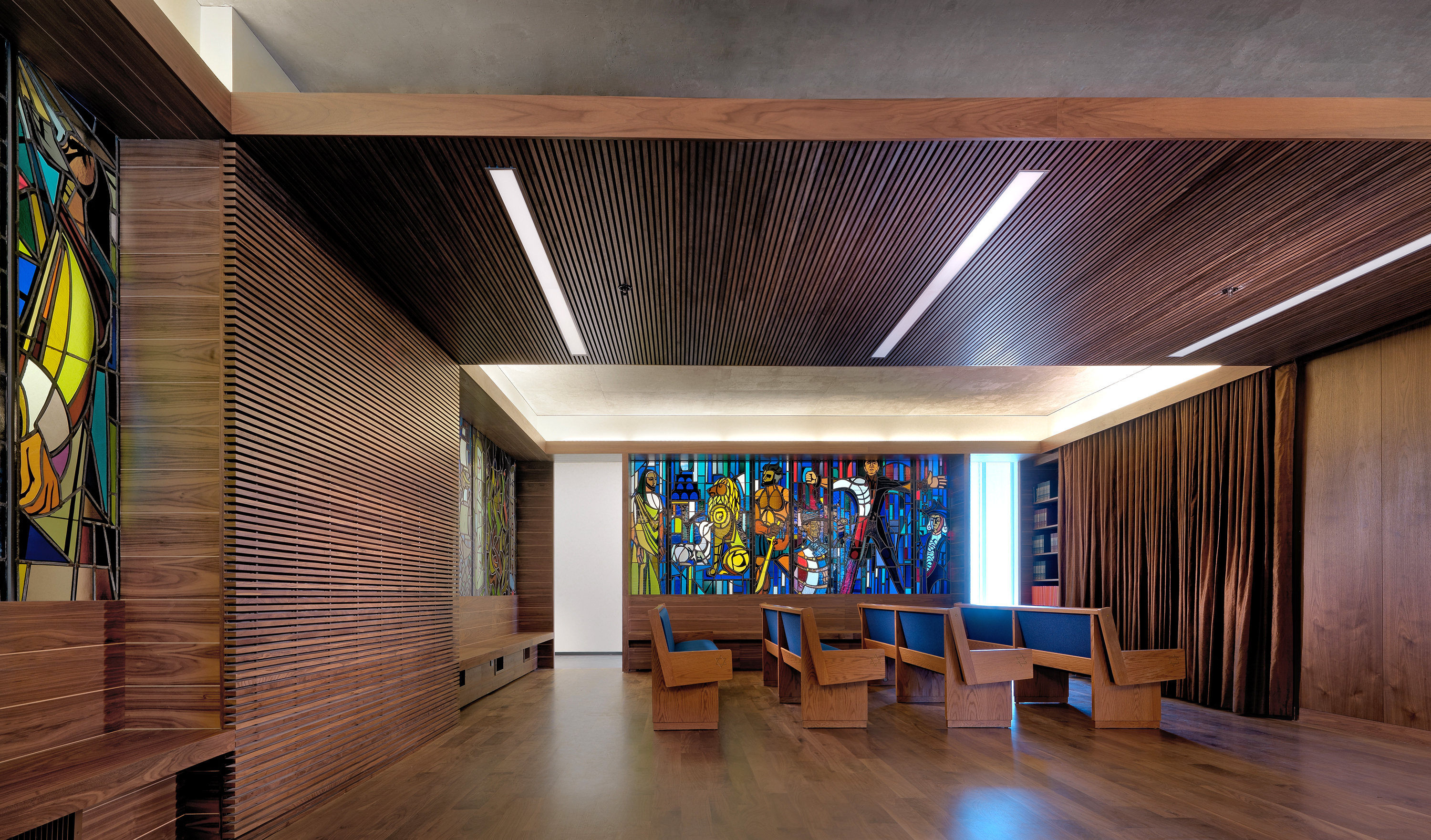 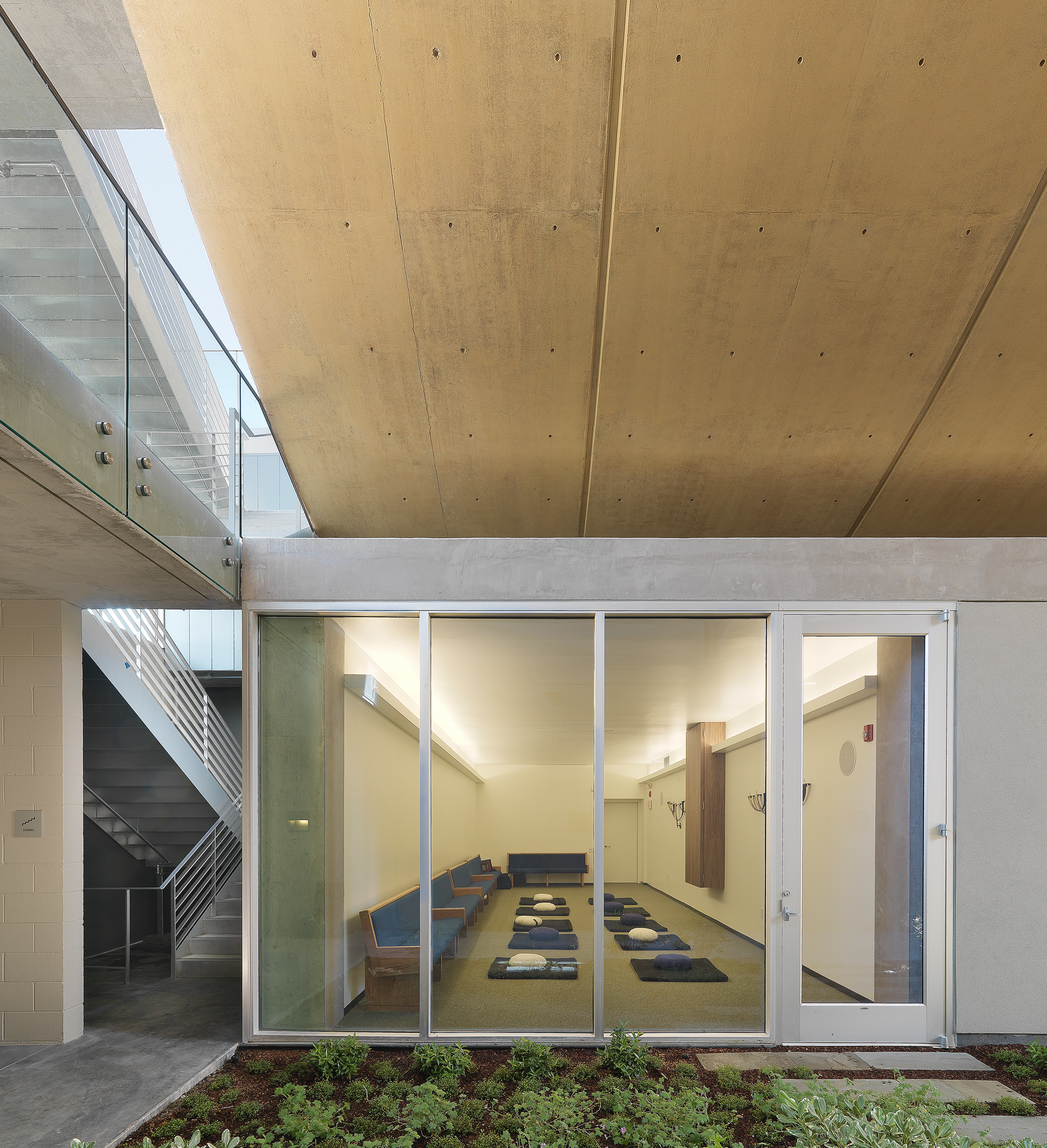 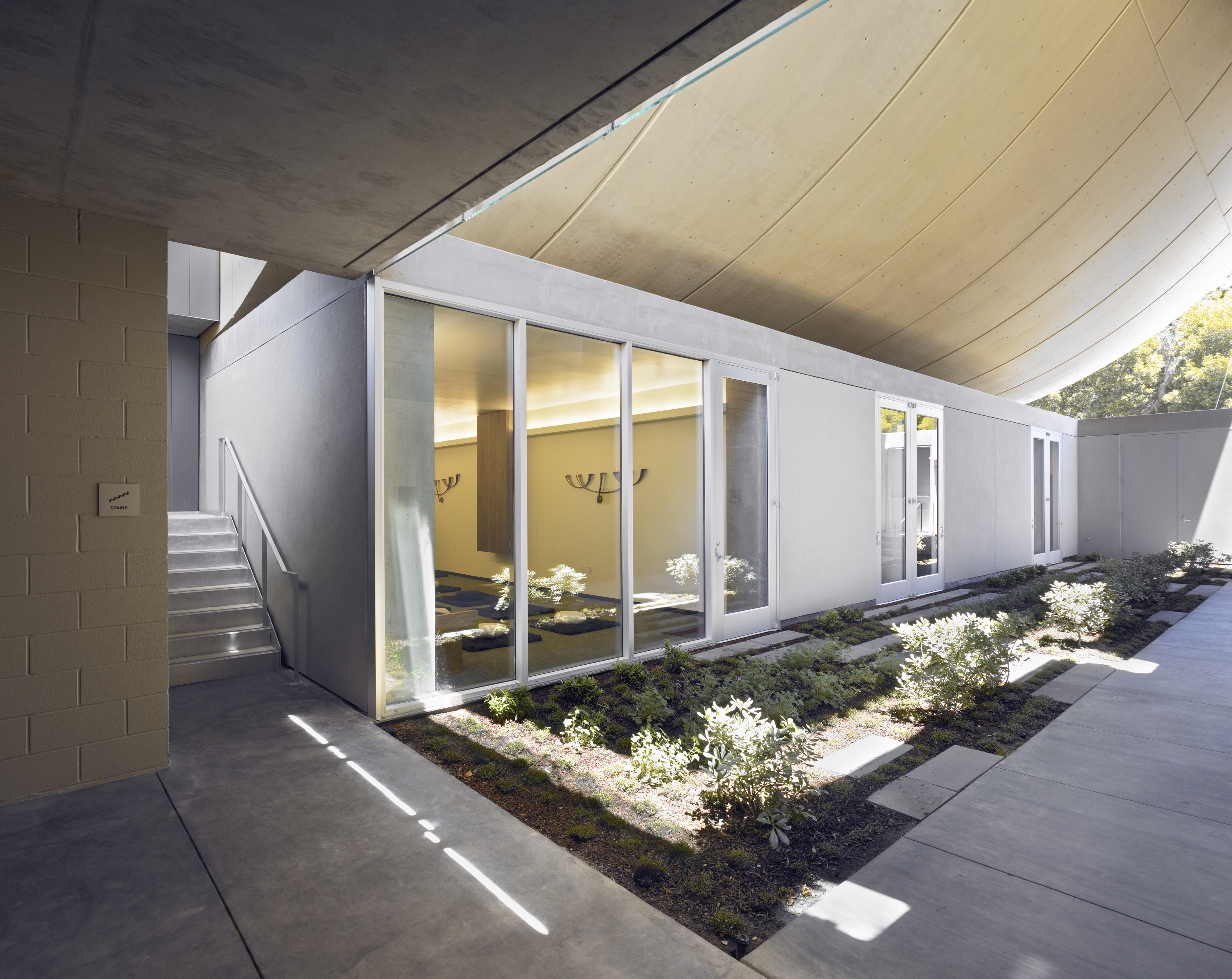 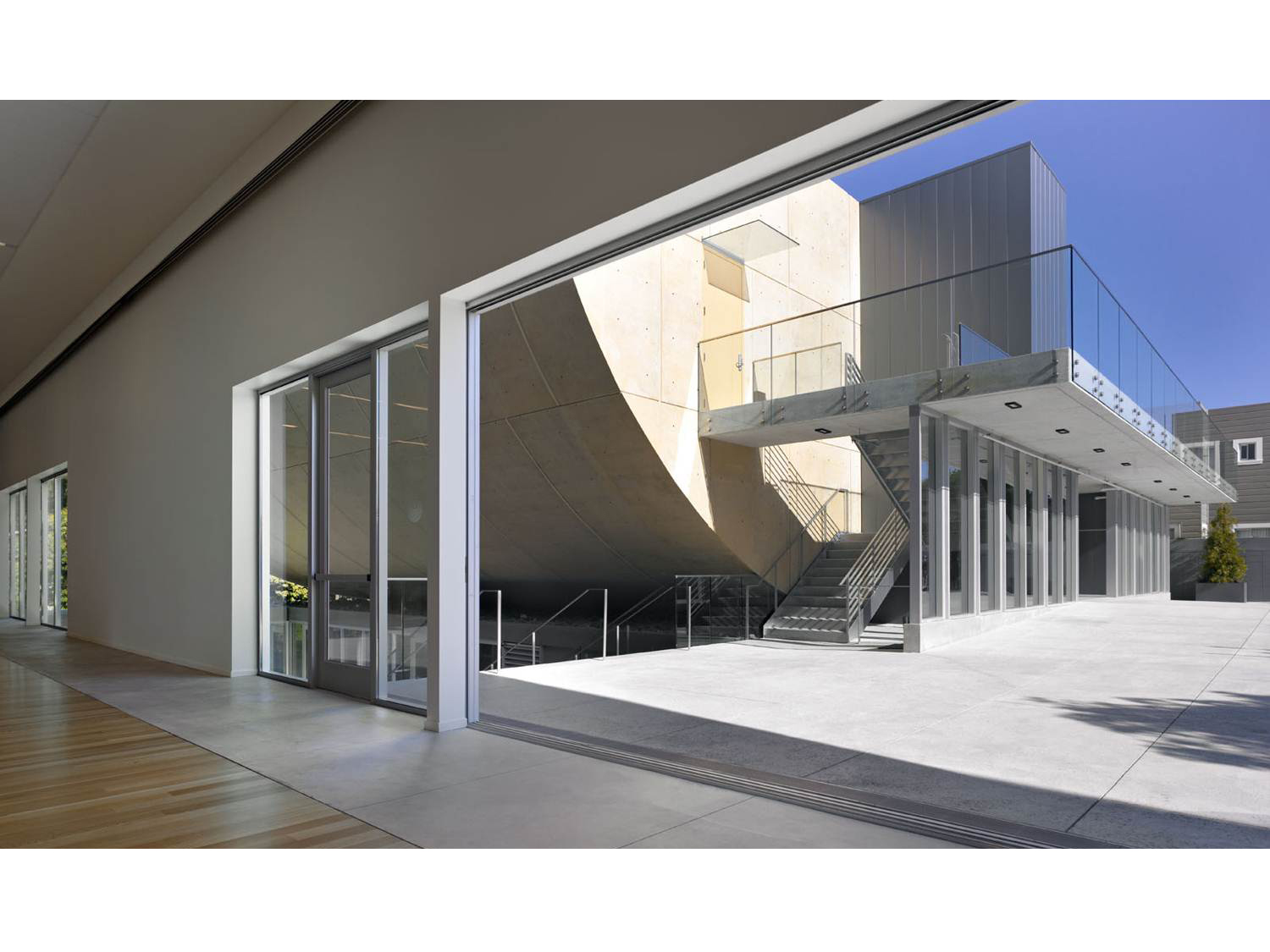 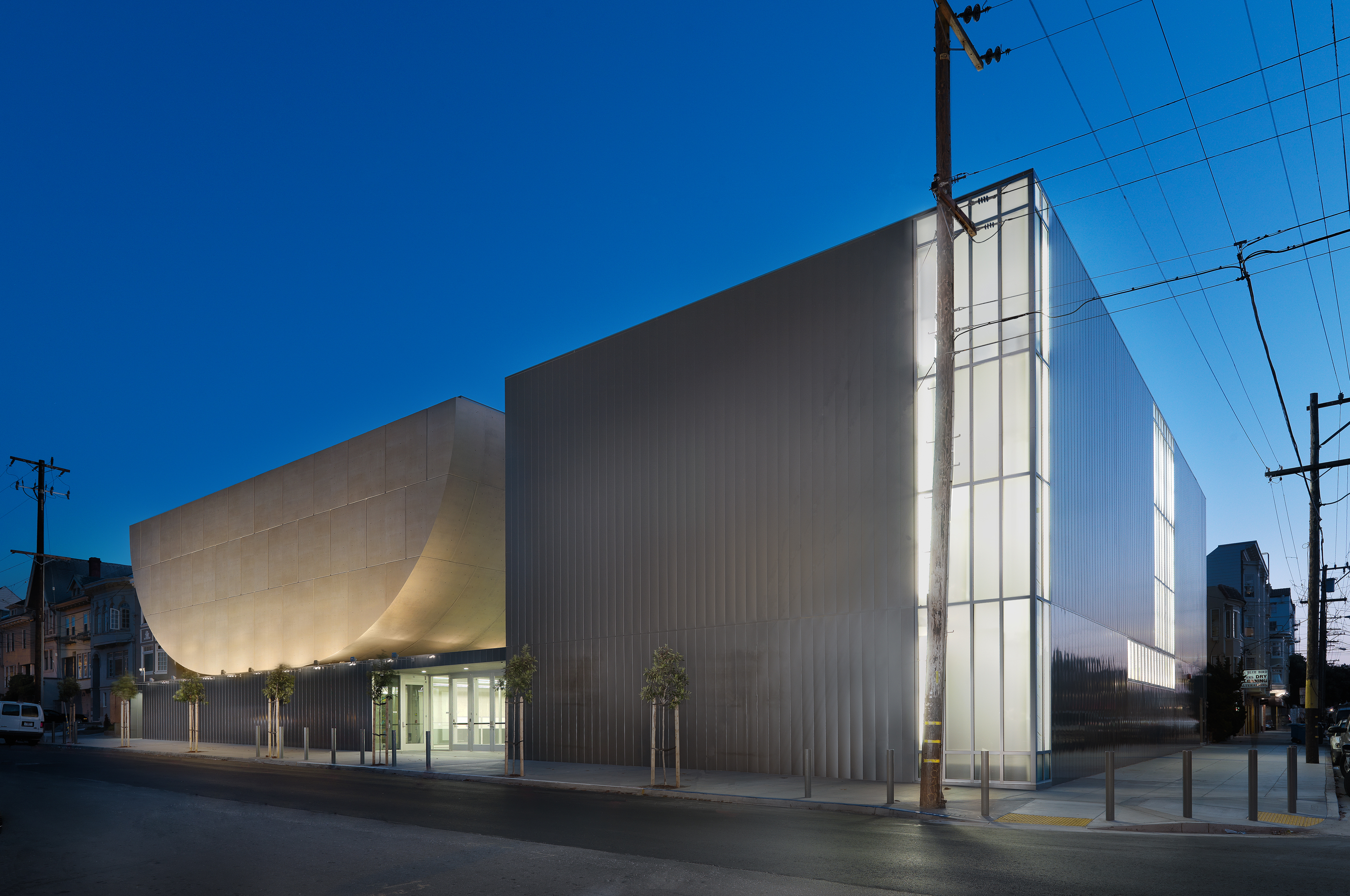 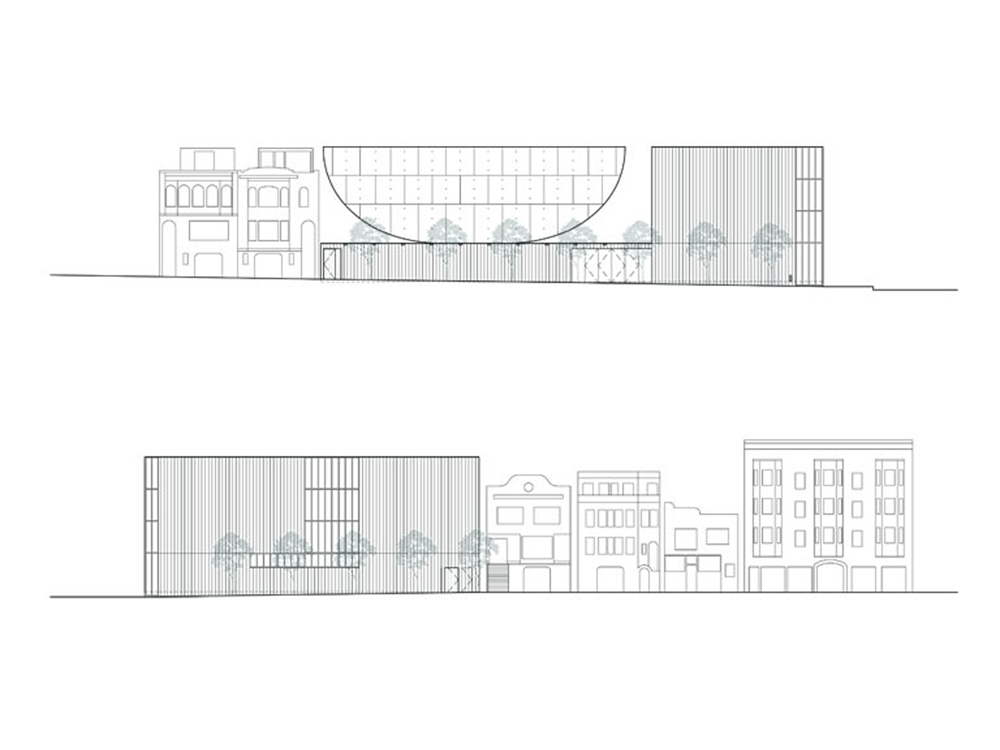 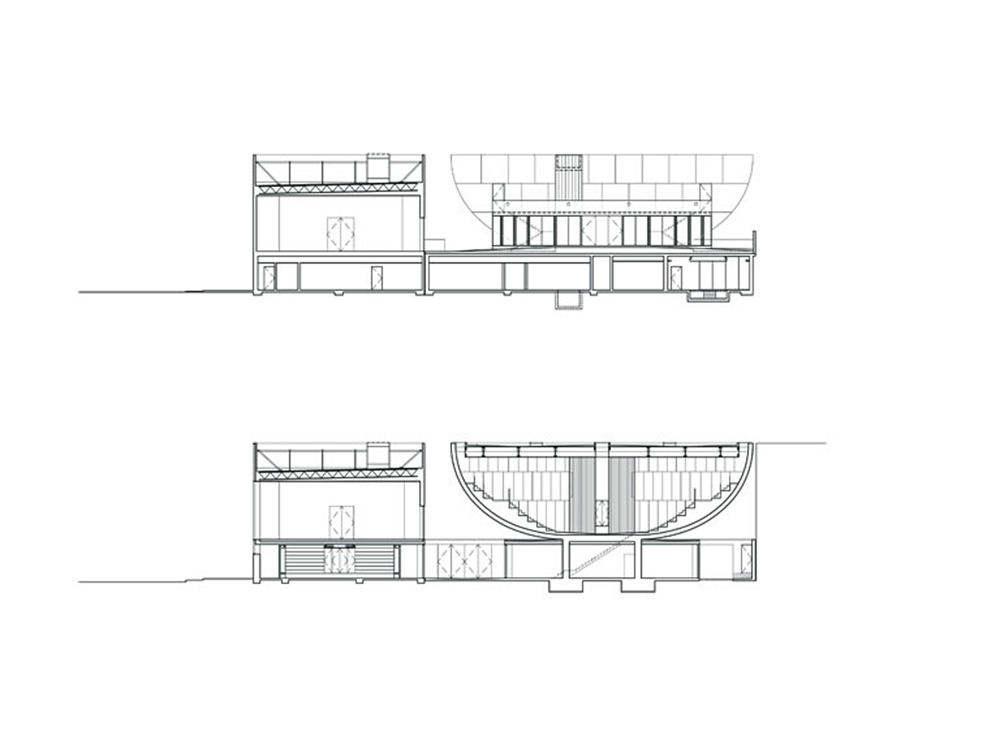 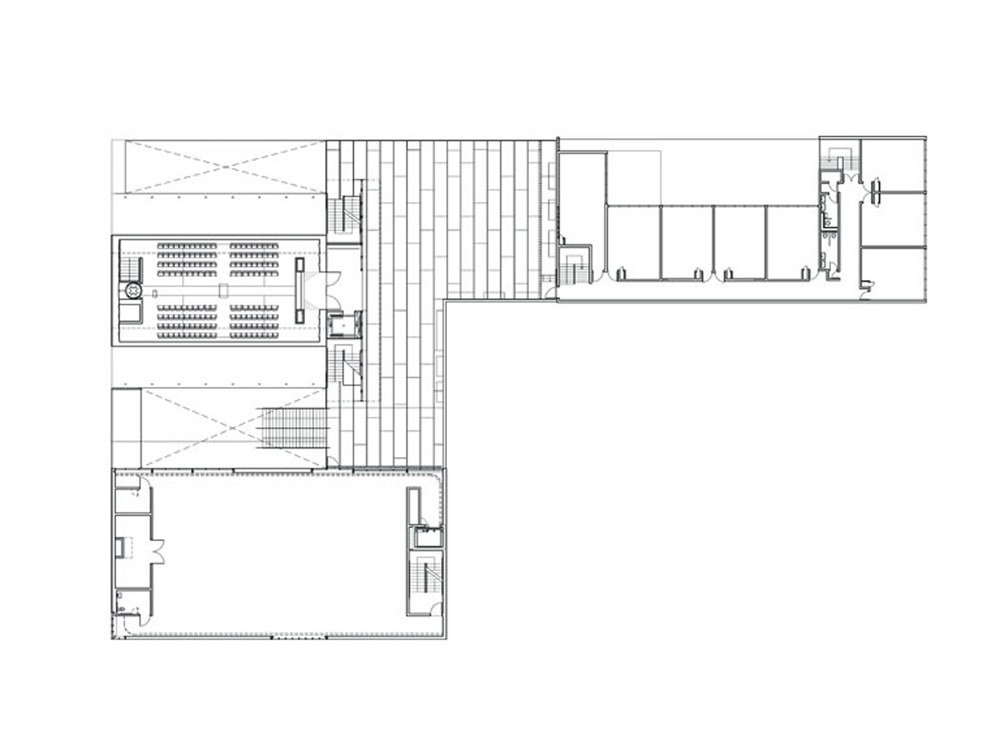 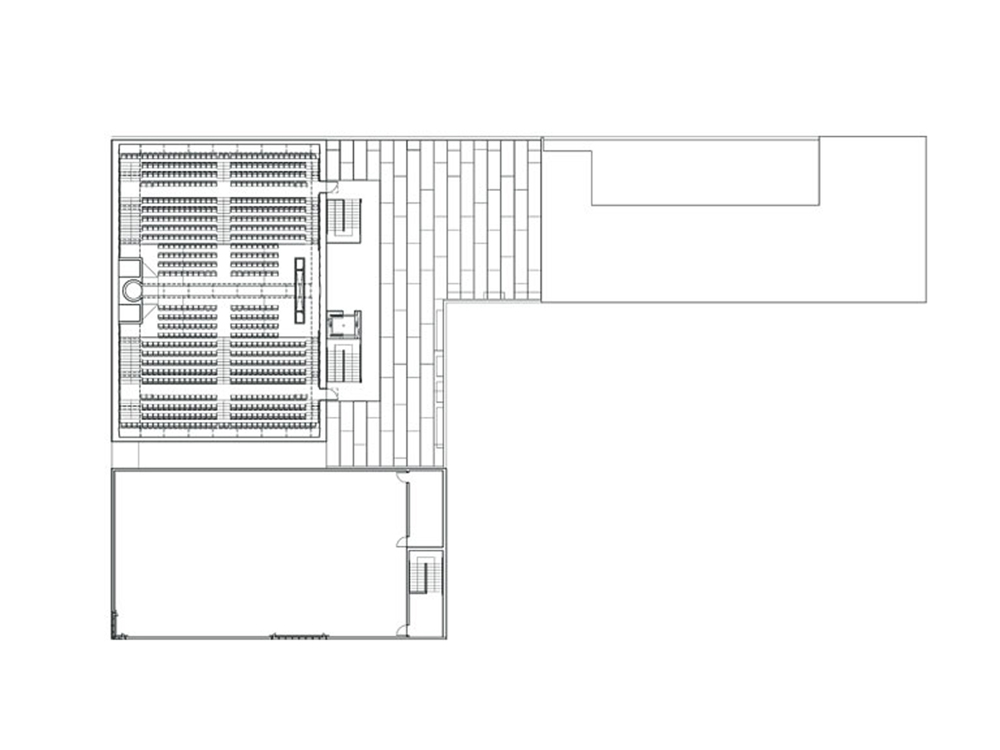 The site is in San Francisco, in the flat Richmond district, at the intersection of Park Presidio and Clement Street. An early plan established a pair of religious structures as gateposts along this boulevard. One is the strong presence of the Neo-Classical Christian Science Church. The other is Congregation Beth Sholom, where an old synagogue was demolished to build this new building.

A plinth is established. Here all the non religious programs of the campus are contained. On the plinth two buildings are placed, forming a courtyard. One is a reflective cube, the social hall, the other a masonry structure, the sanctuary, a vessel floating in air.
The origins of this structure are ancient. Solomon’s Temple, built in Jerusalem after the Jews returned from exile in Egypt, was a procession of courts, ending with the Holy of Holies.

Here, the entry sequence establishes the distinction of a sacred place in the city through passage. It is a circular journey of turning and rising and turning. The first point of arrival is the lower court from which a stair ascends to the courtyard. Here the three elements of the complex, sanctuary, social hall and existing school are connected. This circular route enables the sanctuary to be entered from the west facing the ark of torahs in the east, an important liturgical requirement.

1. The project begins from the inside….with the desire for the creation of a sacred vessel. The essential aspect of Conservative Judaism is that it is egalitarian; women and men participate equally in the liturgy. The Orthodox Jewish Tradition of women separated in a balcony or by a curtain is eliminated. The room is a vessel focussing all worshipers in a single community centered on the Bimah.

2. The problem of creating sacred space in the midst of the city. In nature one can sense the power of creation; in the city one is focused on the works of man. Only the view of the sky presents original nature. The only window in the synagogue is a slice of sky in the ceiling.

The design for the sanctuary begins from the inside with the creation of a sacred room, a space in the round, focused on the center from where the services are conducted. The format of two facing tiers of seating is the shape of the earliest synagogue remains at the fortress of Masada.

Here women and men participate equally in the liturgy. The Orthodox Jewish Tradition of separation via a balcony is eliminated. The room is a vessel, embracing worshipers in a single community.

The form engages gravity as an ally, entering at the lowest point, the room fills like a cup, maintaining an intimate density even when not packed. Its walls are people.

A slice of sky in the ceiling turns into the eternal light above the Ark on the Eastern Wall. The baffled walls deflect sound. The colors are dusk and dawn, when day and night merge.

Jewish tradition equates iconography with idolatry – images are forbidden. The space is abstract, without figuration. One of the few symbols of Judaism is the seven branched candle, the menorah. Here a shadow menorah, changing as the sun moves through the day, animates the walls. All light enters the room from above, with views of the sky creating a sense of sanctity and remove in the midst of the noise and bustle of the city.

The first religious structure of the Jews was the tabernacle, described by Moses in Exodus, and carried in the wanderings through the desert. The text constantly focuses on the means of connection of the parts, rather than what is connected, as though the building itself is a metaphor for the community it joins.
Here the roof floats over the cup and is connected with light. The ceiling is sliced by the sky. By night it is lit with stars of light.

The expression of this interior is the exterior of the building. The exterior also remembers the Western Wall in Jerusalem, using the color and form of the stones of the ancient temple.

From the lower entry court, the chapel is the first space. This is where daily morning and evening services are held. Like an old Beith Midrash (house of learning) the room is intimate with seating all around the walls. This is the repository of the history of the community, where the salvaged stained glass from the previous synagogue wraps the room.

Across the court are the administrative offices, meditation space, library, and meeting rooms, which open onto a small garden below the bowl.

Above is the social hall, a generous multi-purpose space which
opens to the court.

In the neighborhood, the building marks the corner with a thin tower like slice. This corner building, in contrast to the solid masonry sanctuary, is reflective and light. Although small in comparison to the many large towering and domed religious structures in various neighborhoods of the city, this building, by design, marks Congregation Beth Sholom.

The building is both ancient and modern, drawn from traditions and texts in the hope of revitalizing the present.