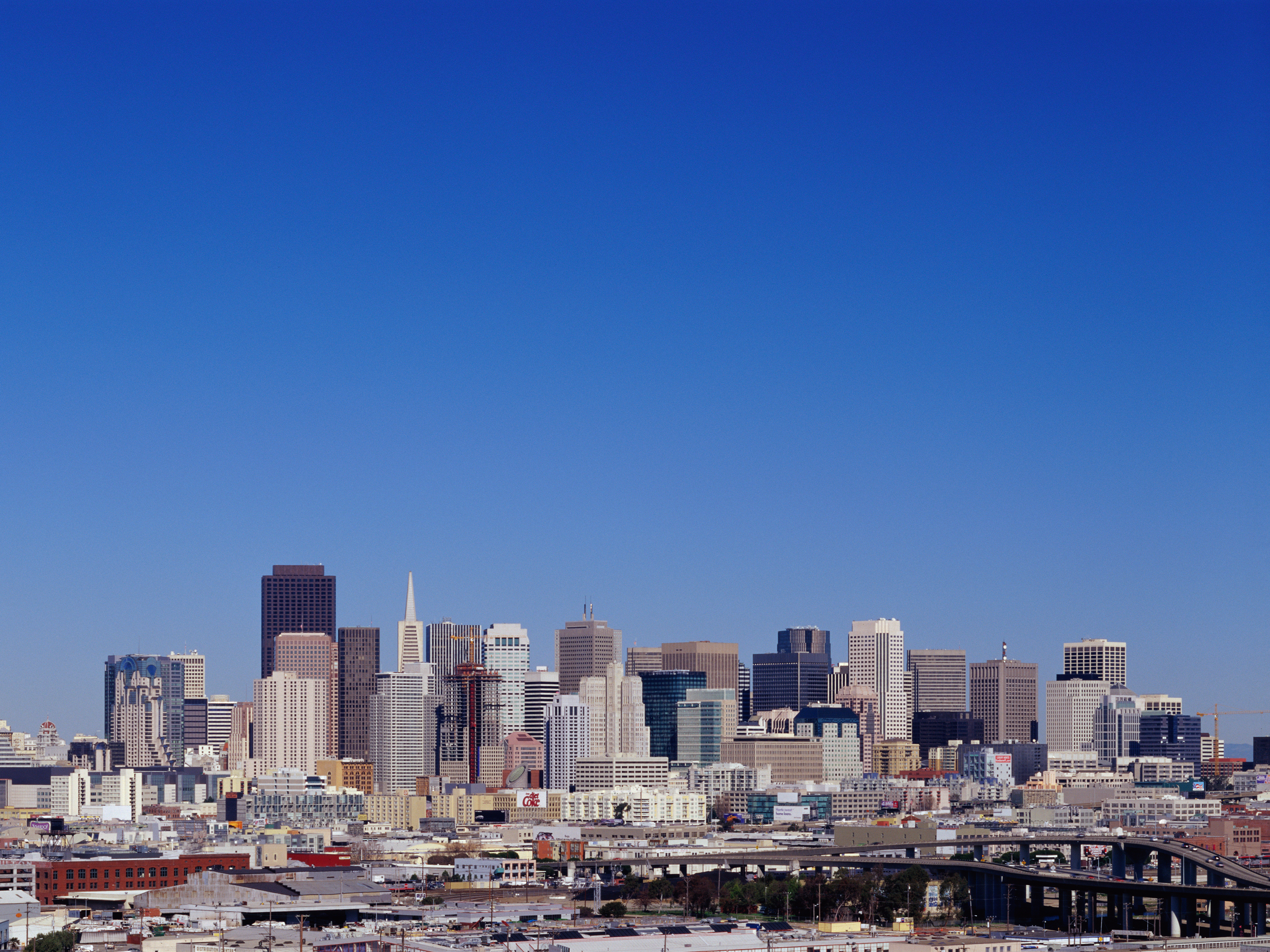 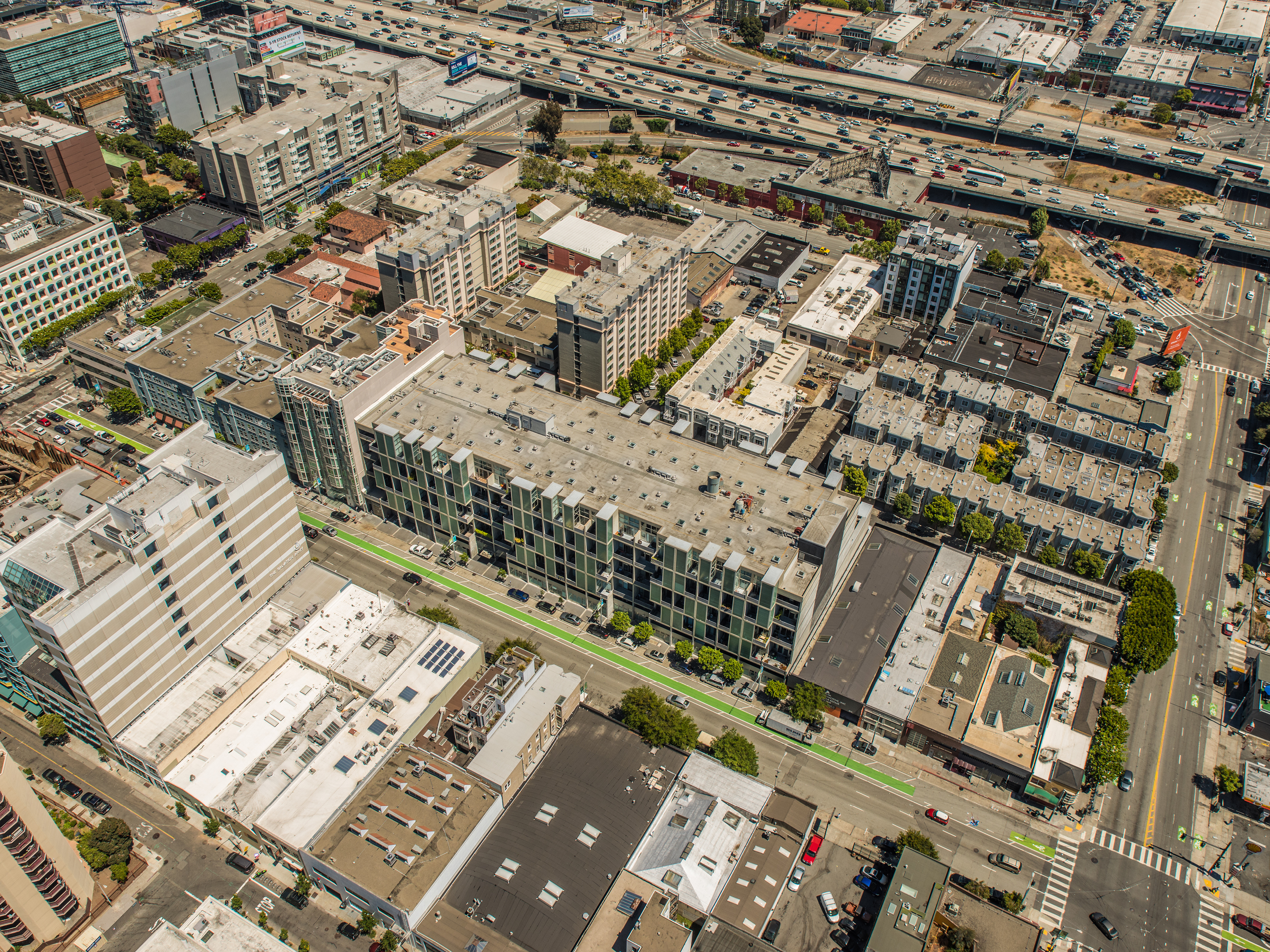 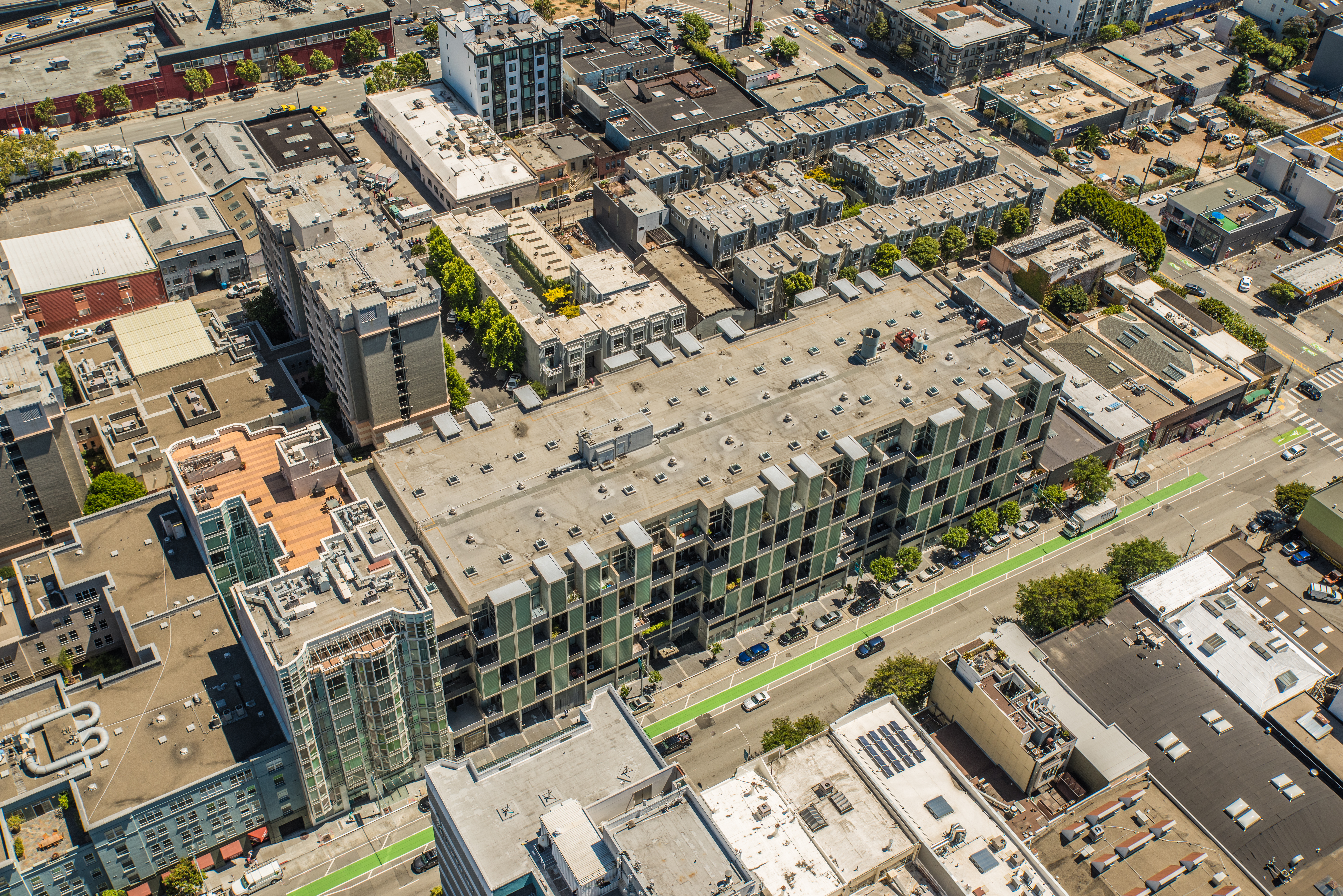 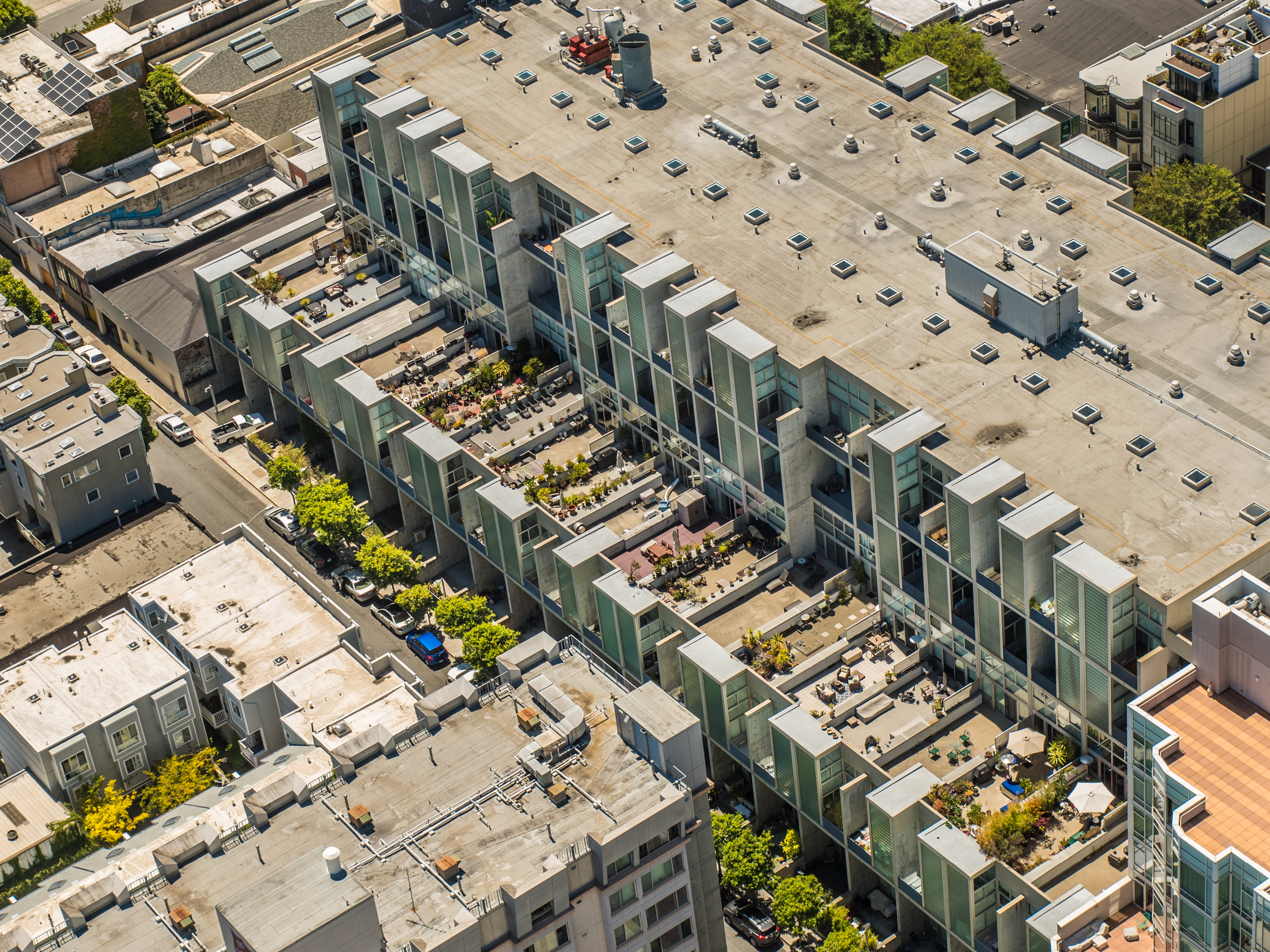 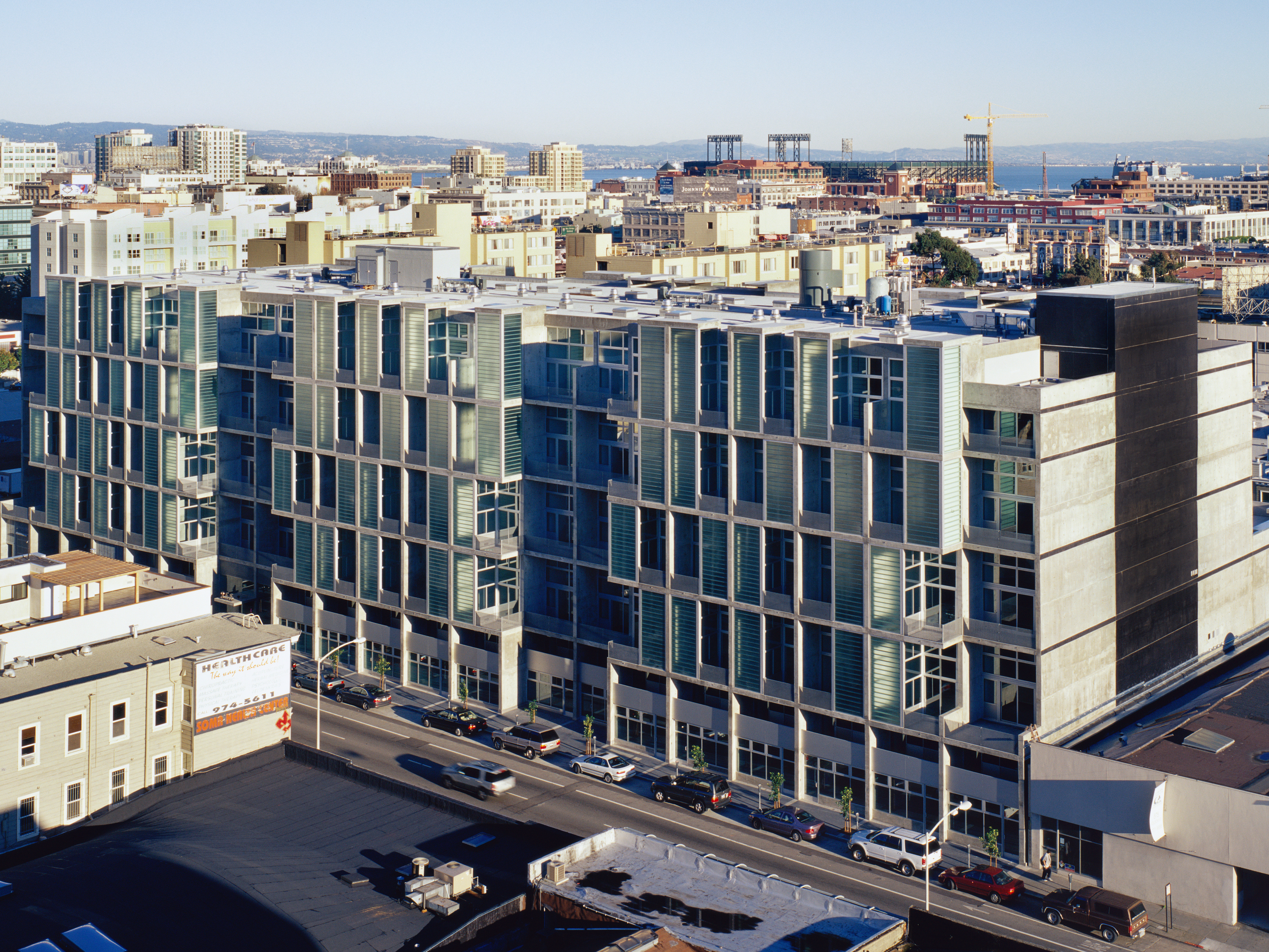 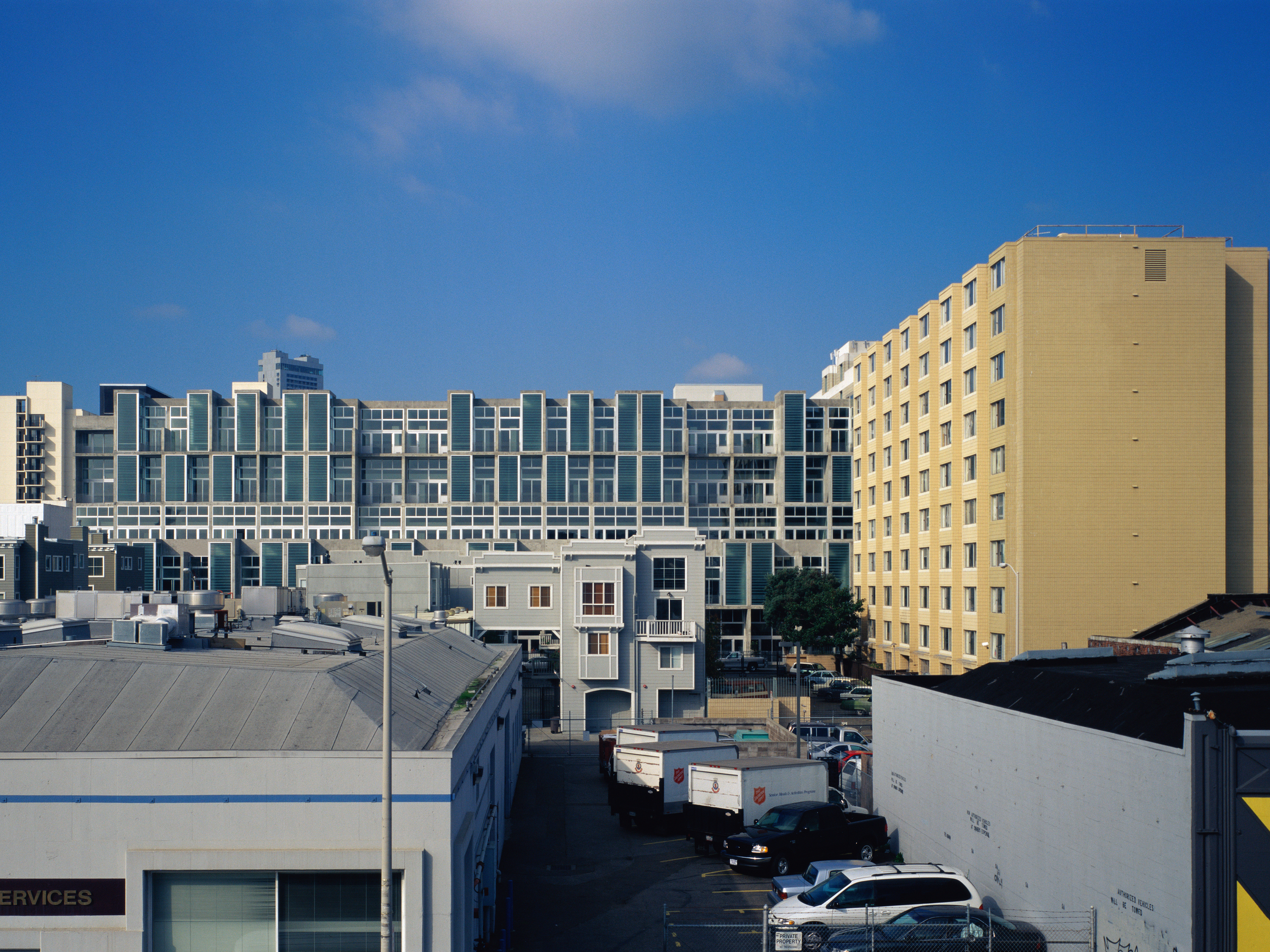 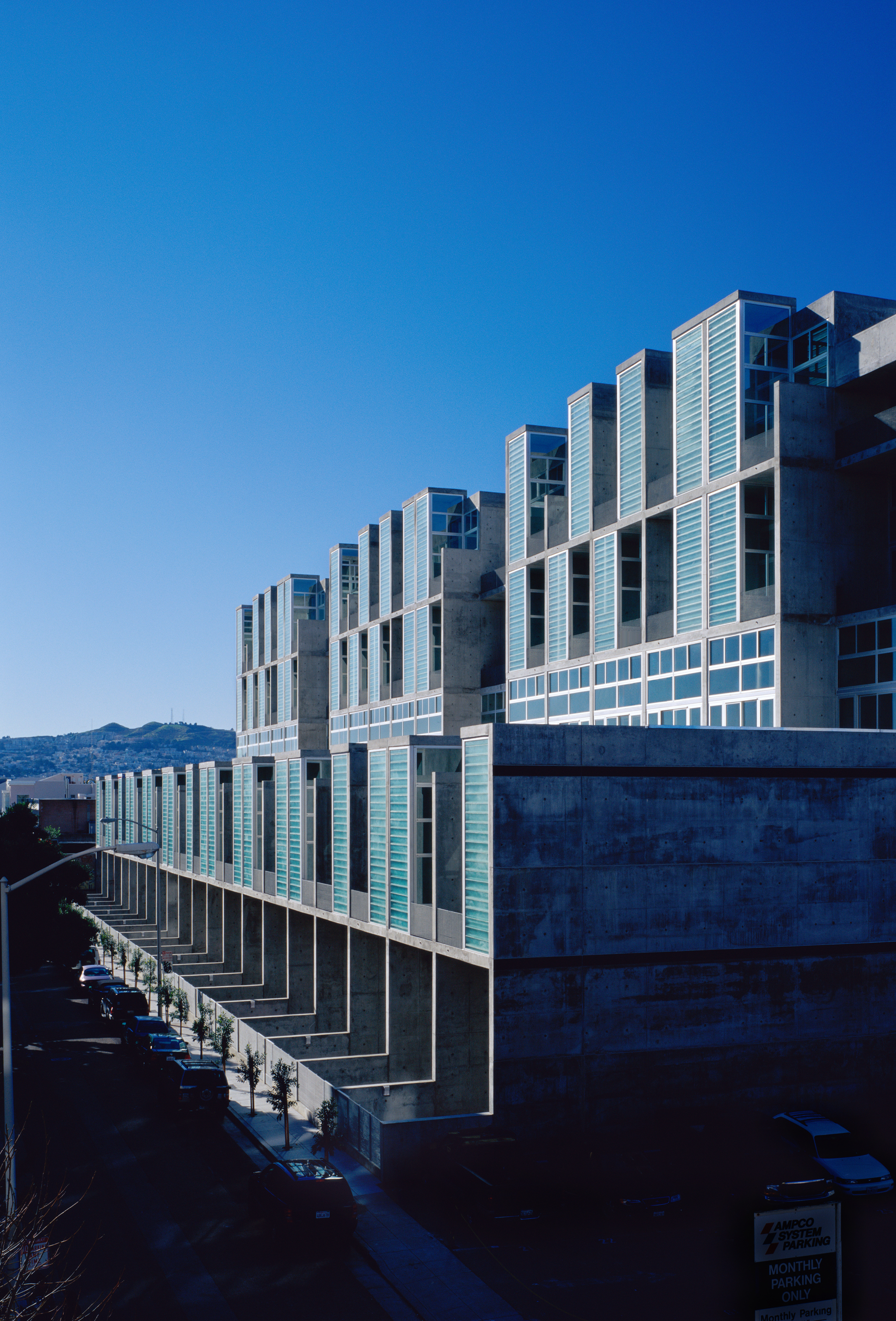 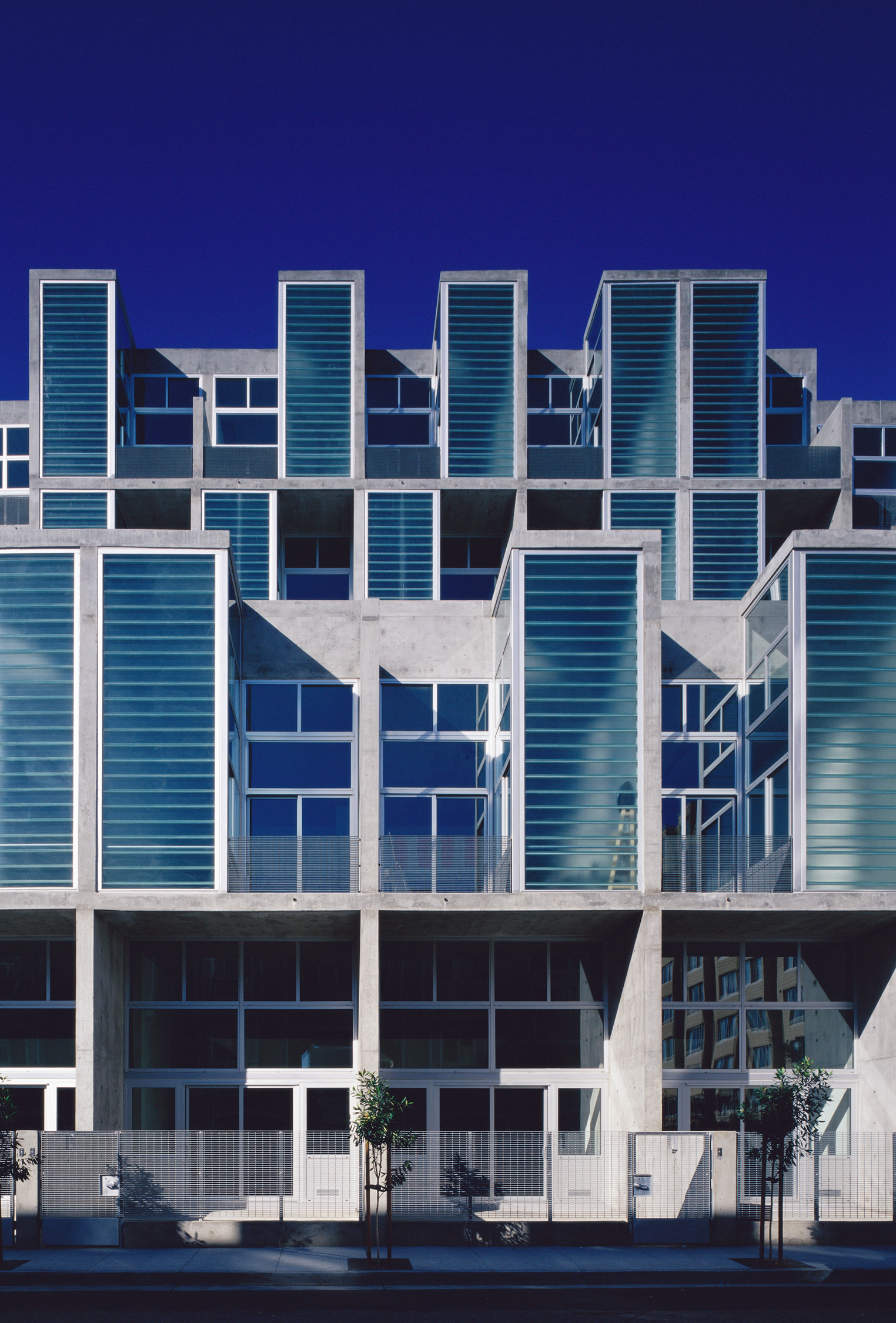 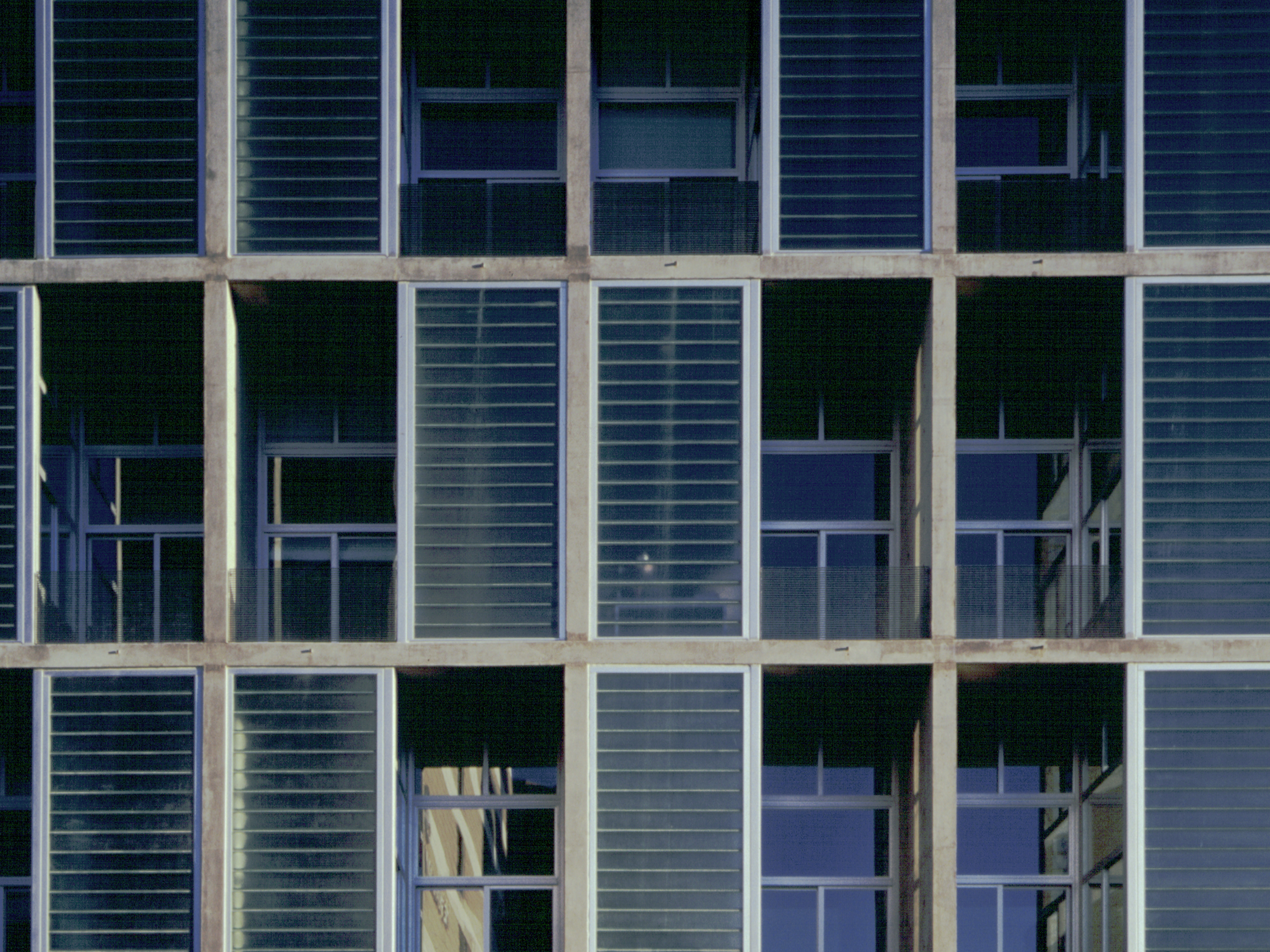 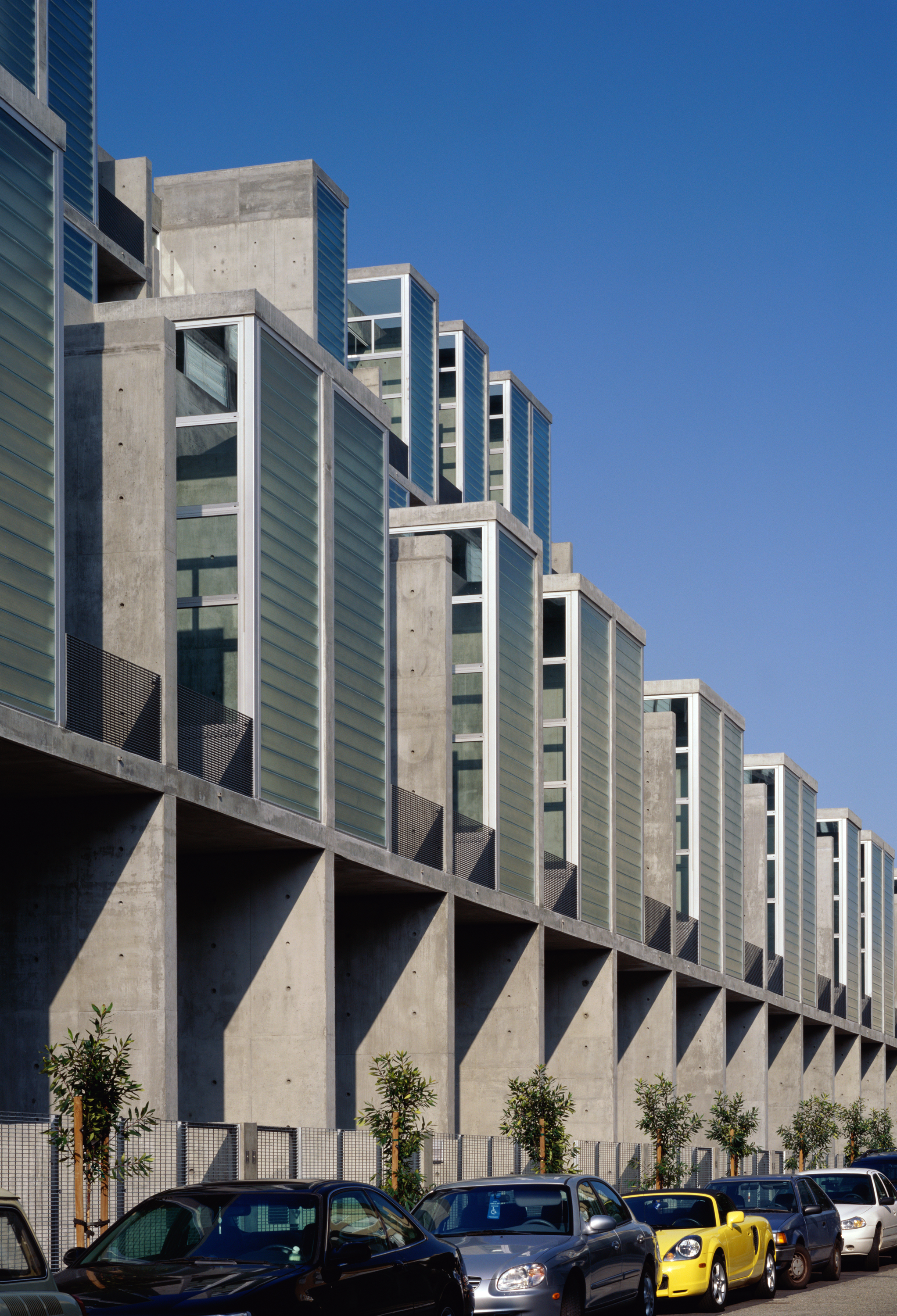 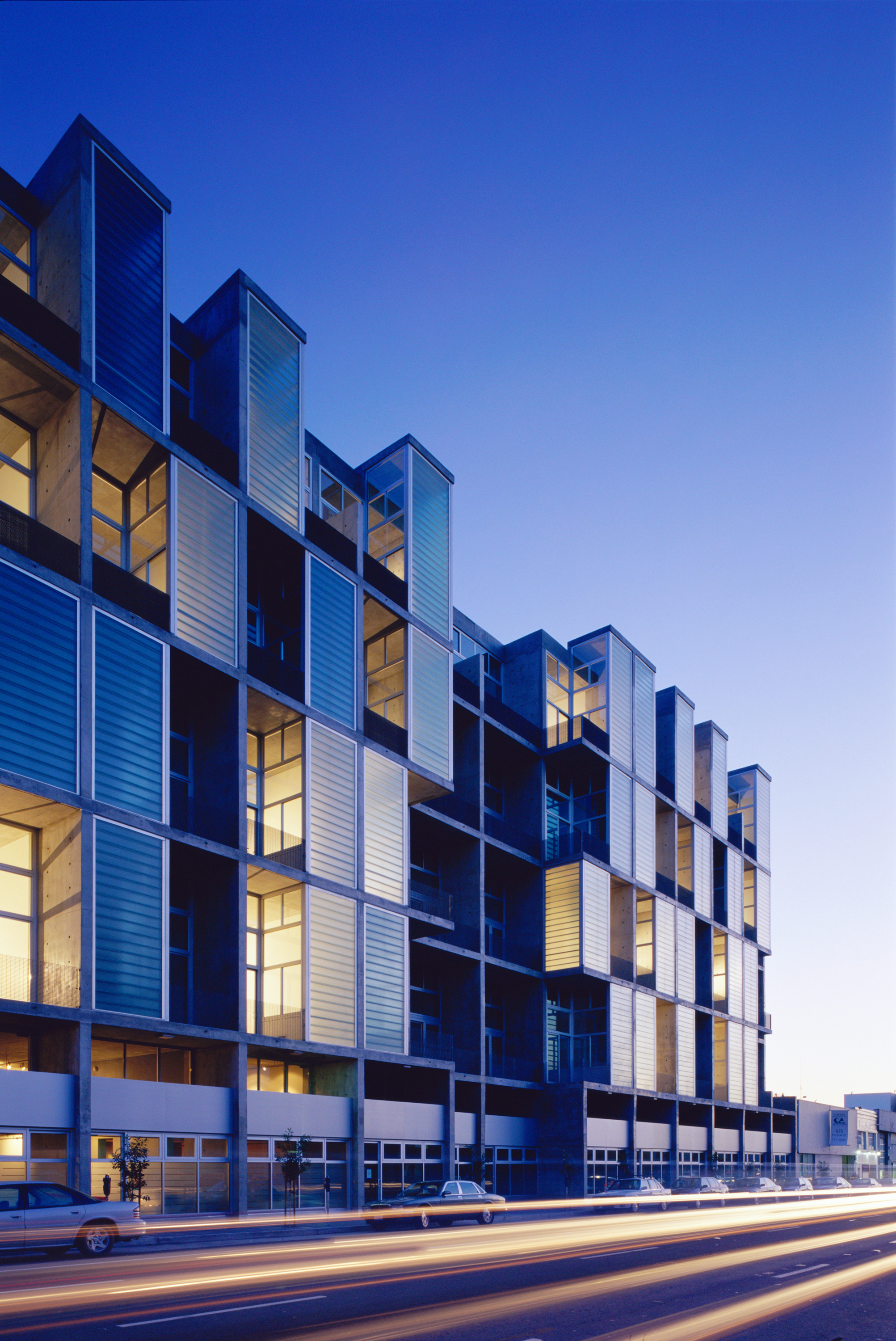 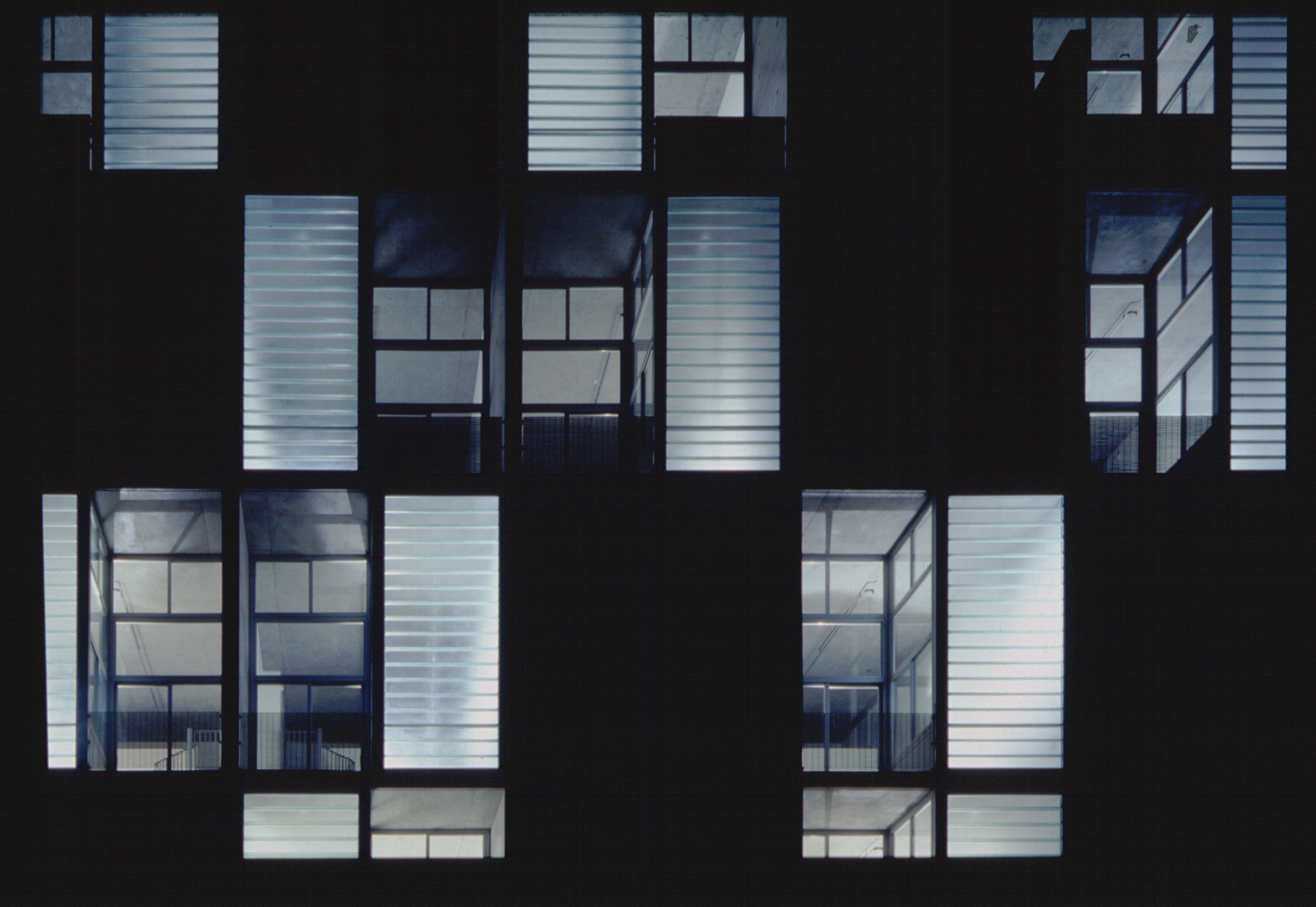 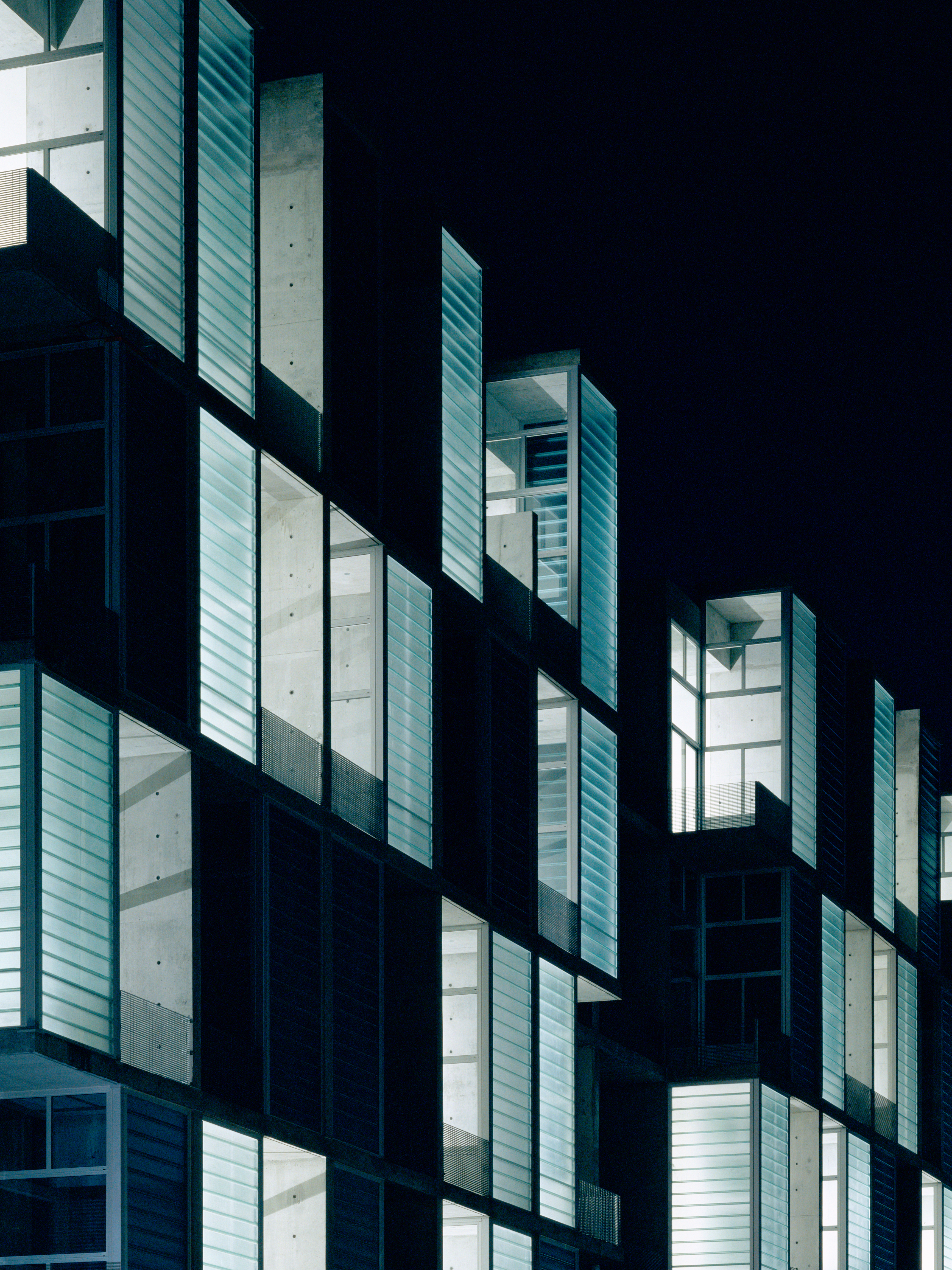 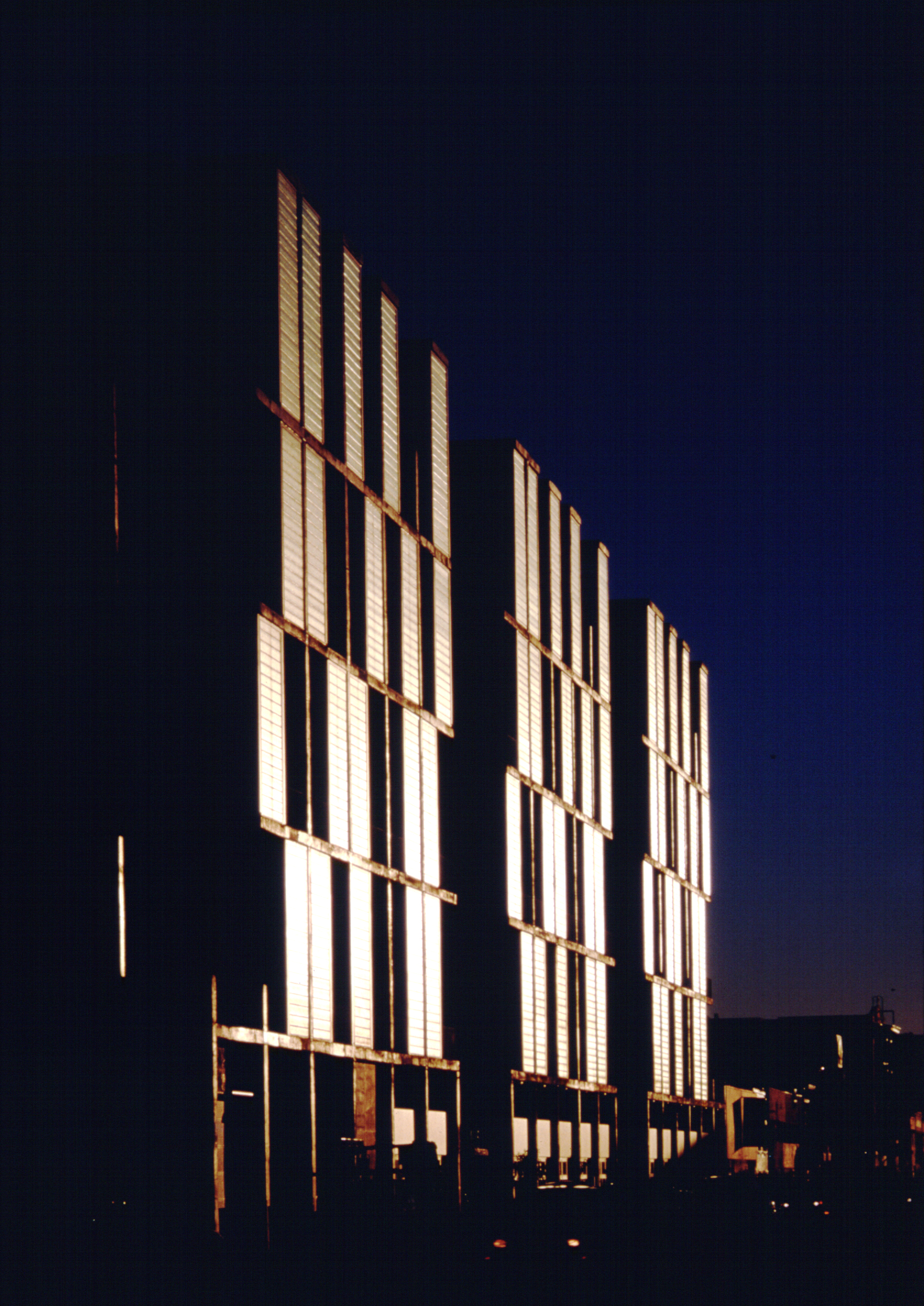 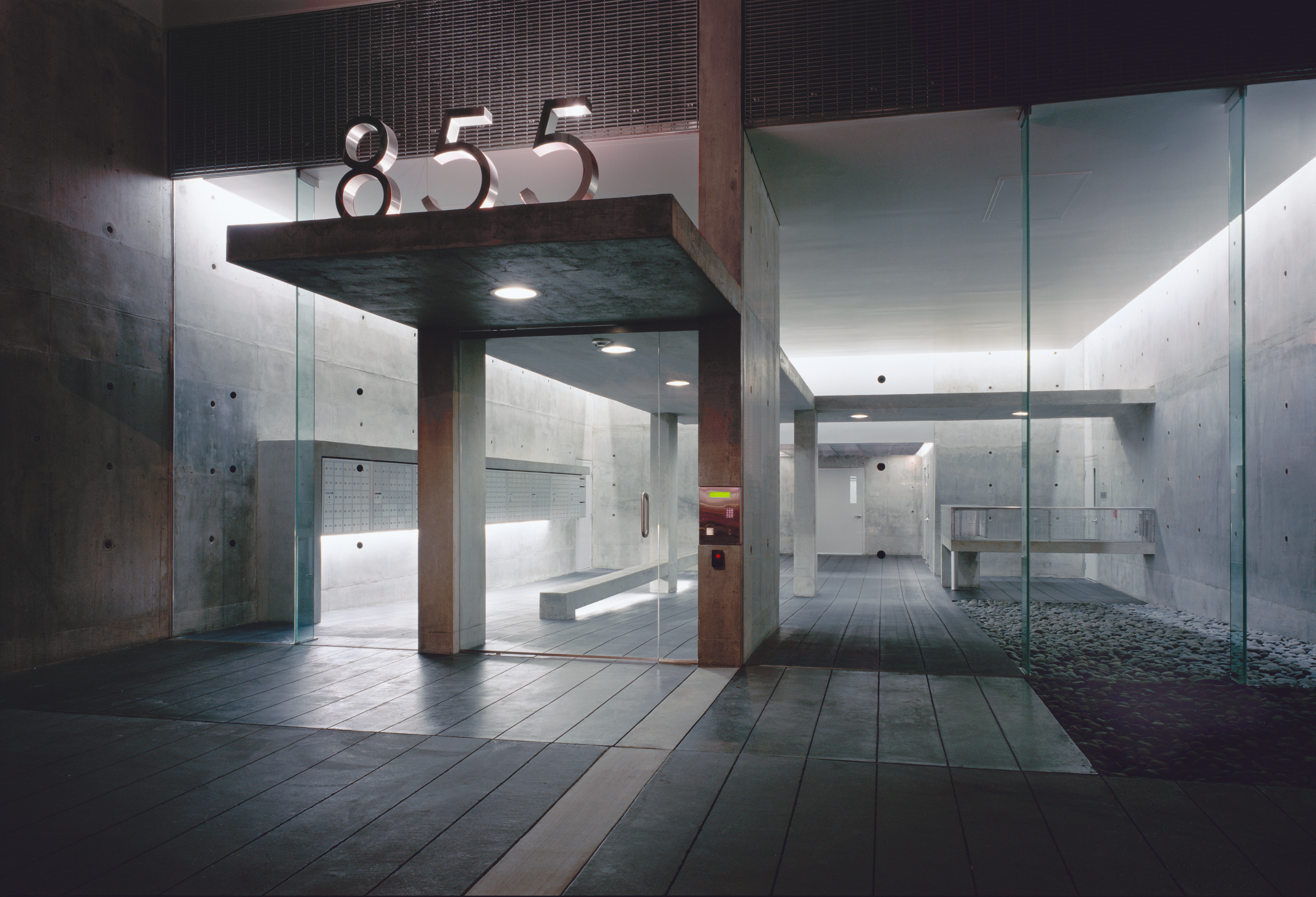 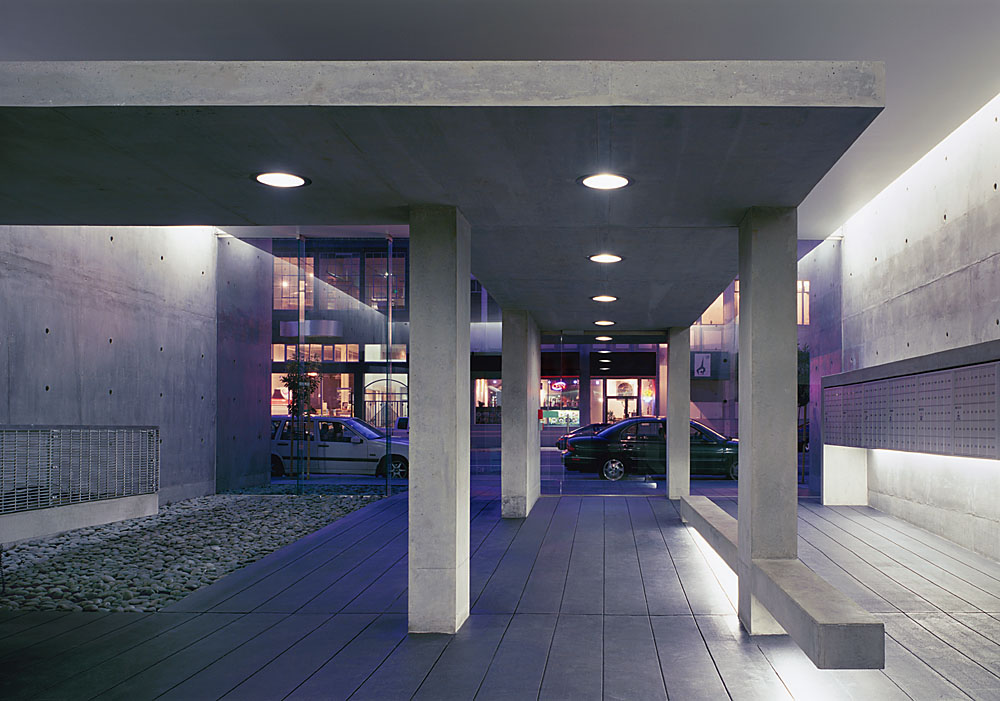 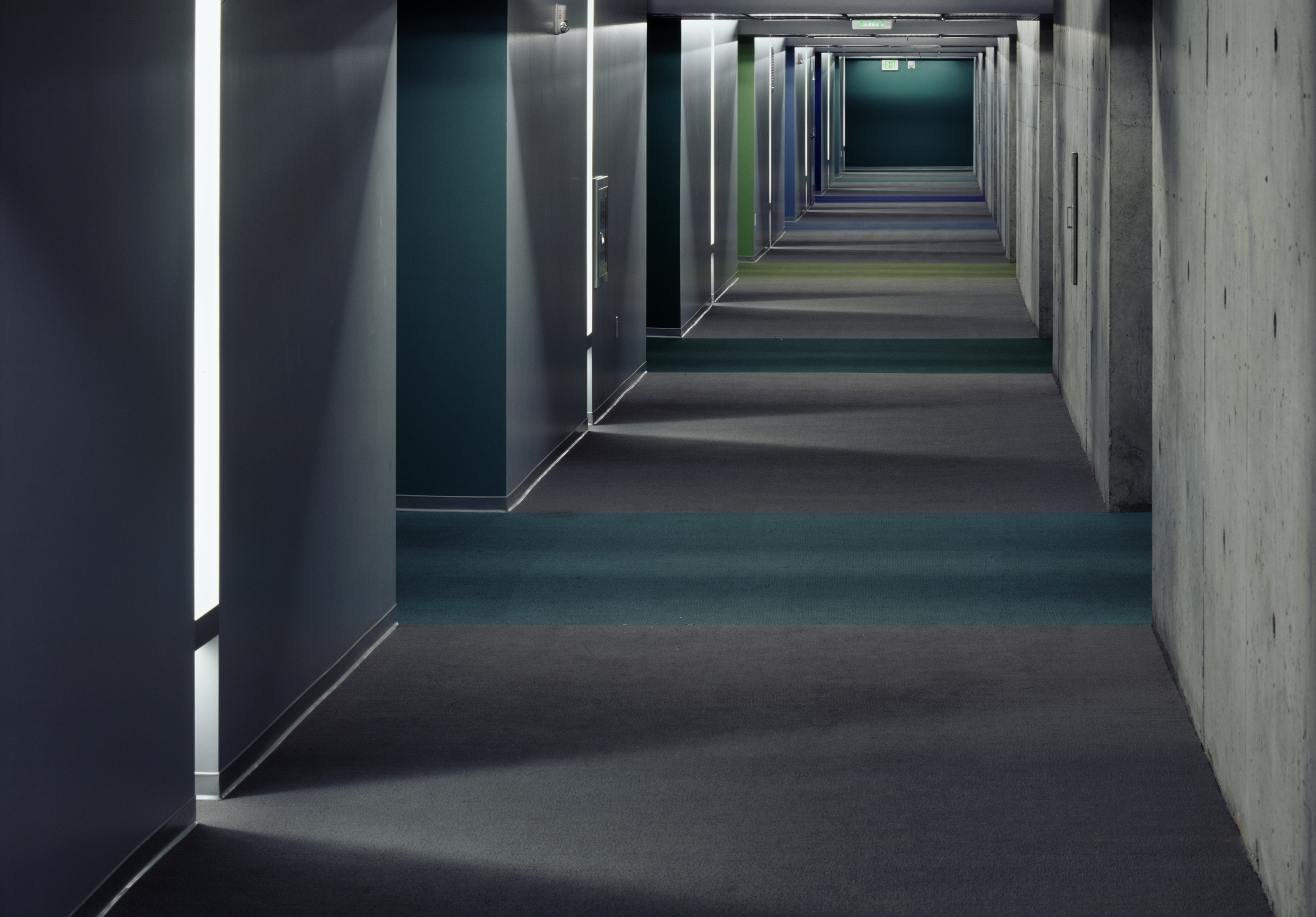 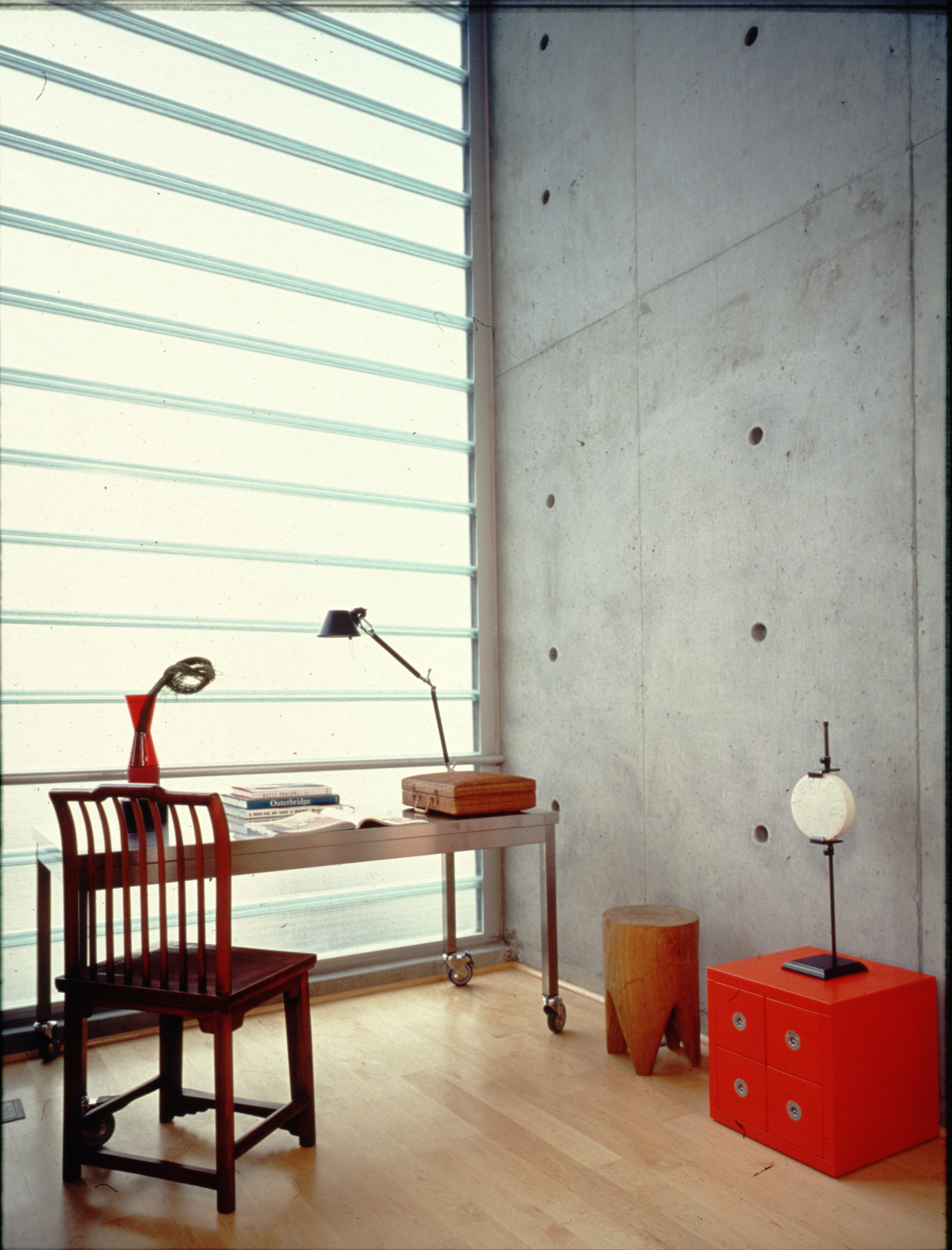 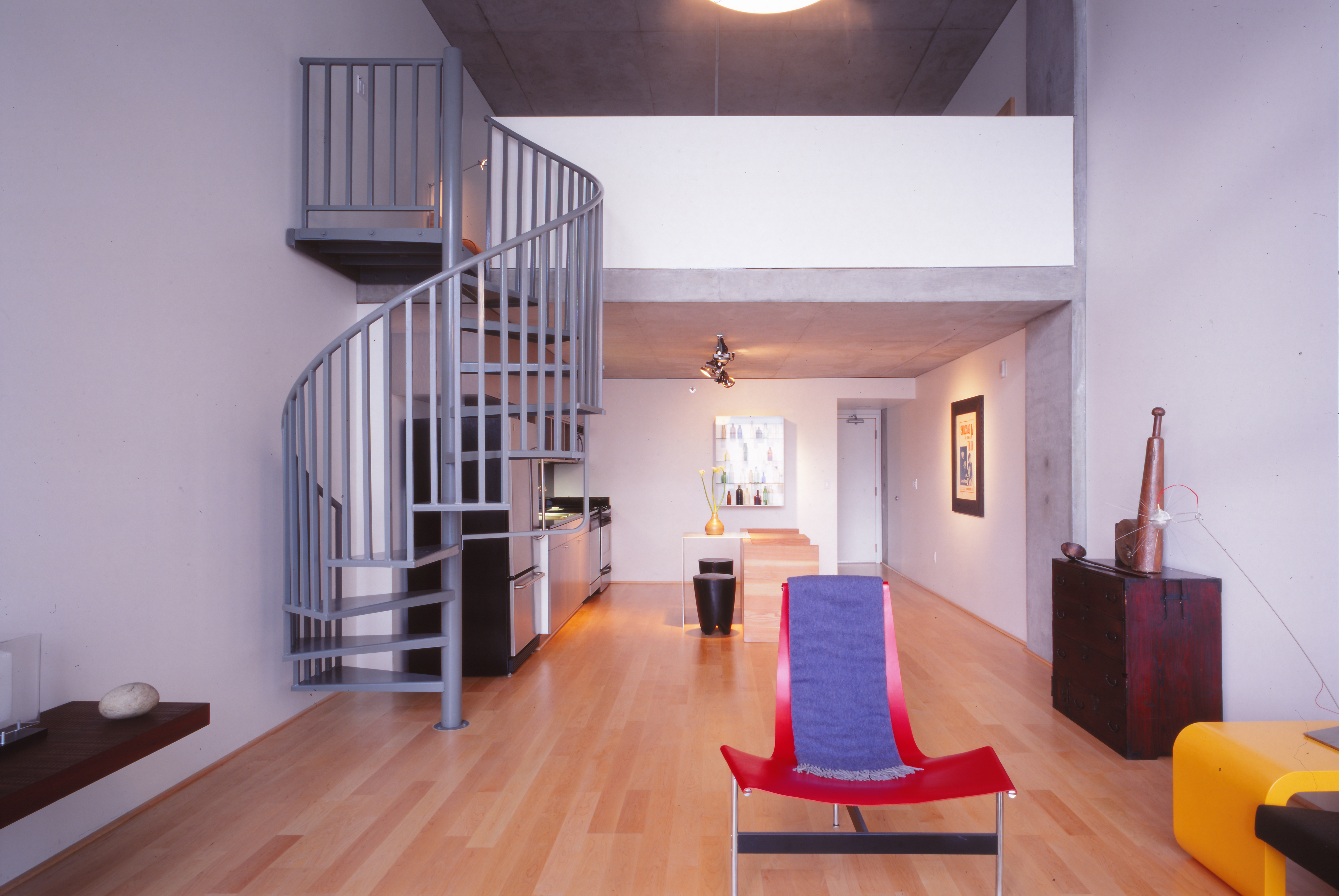 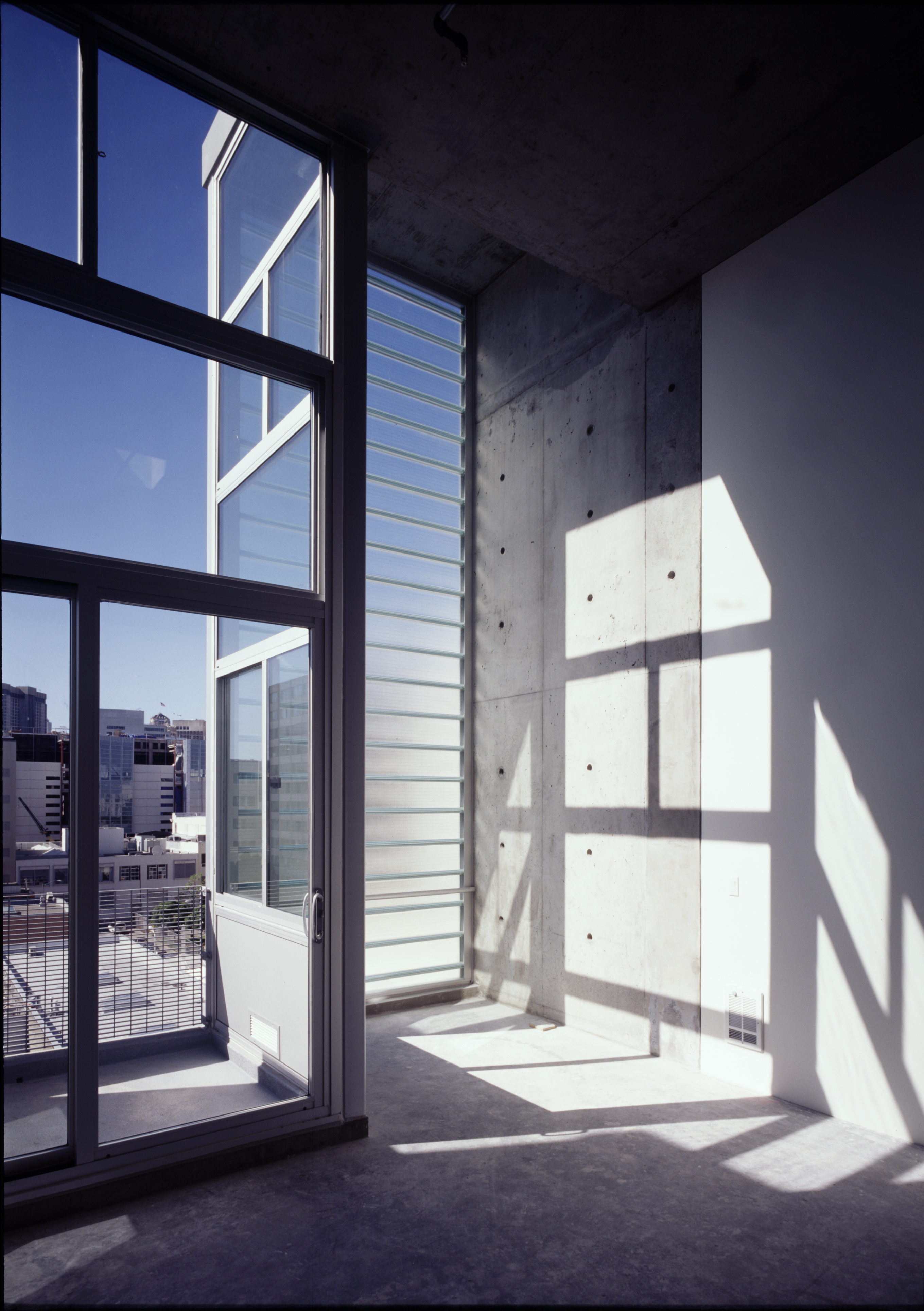 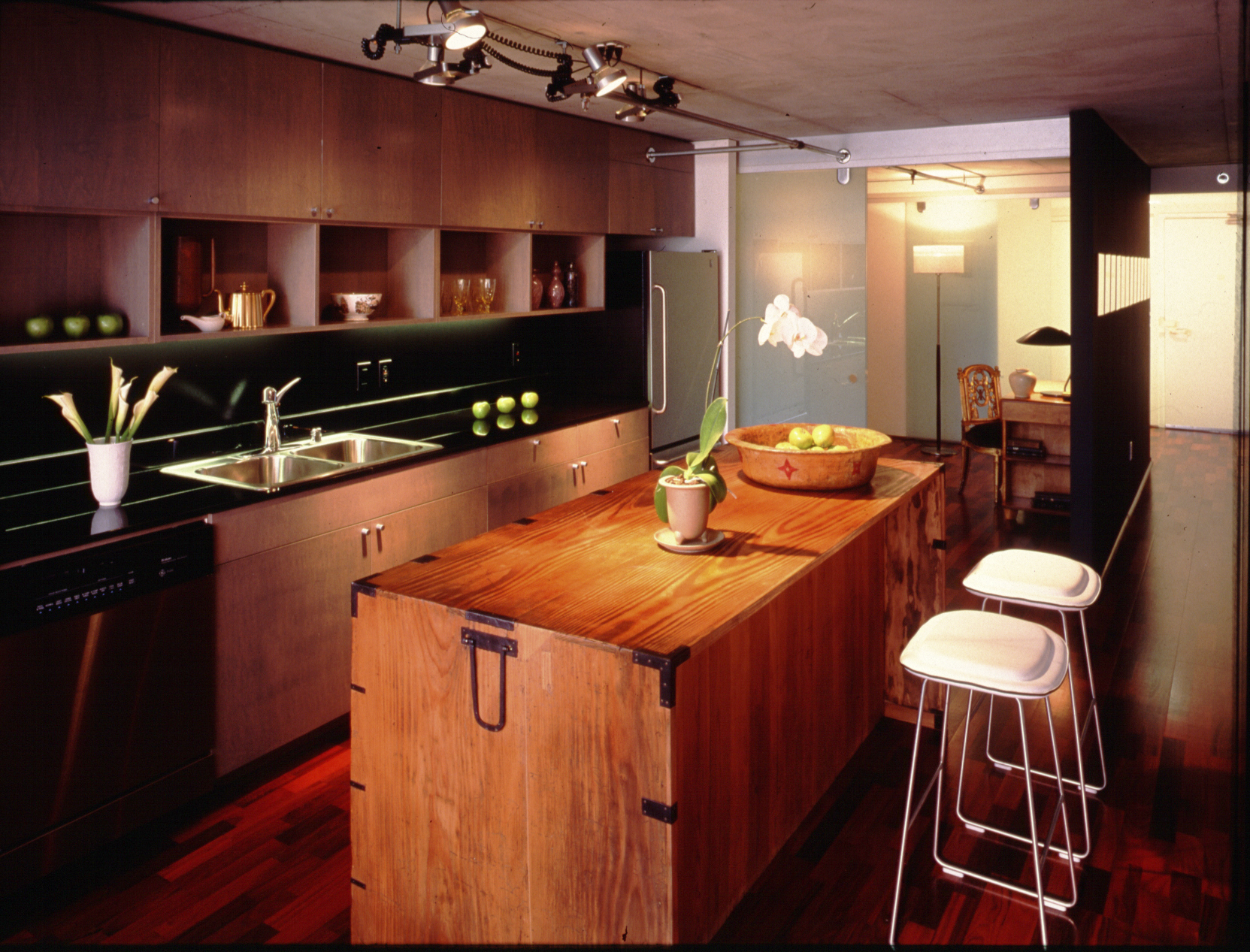 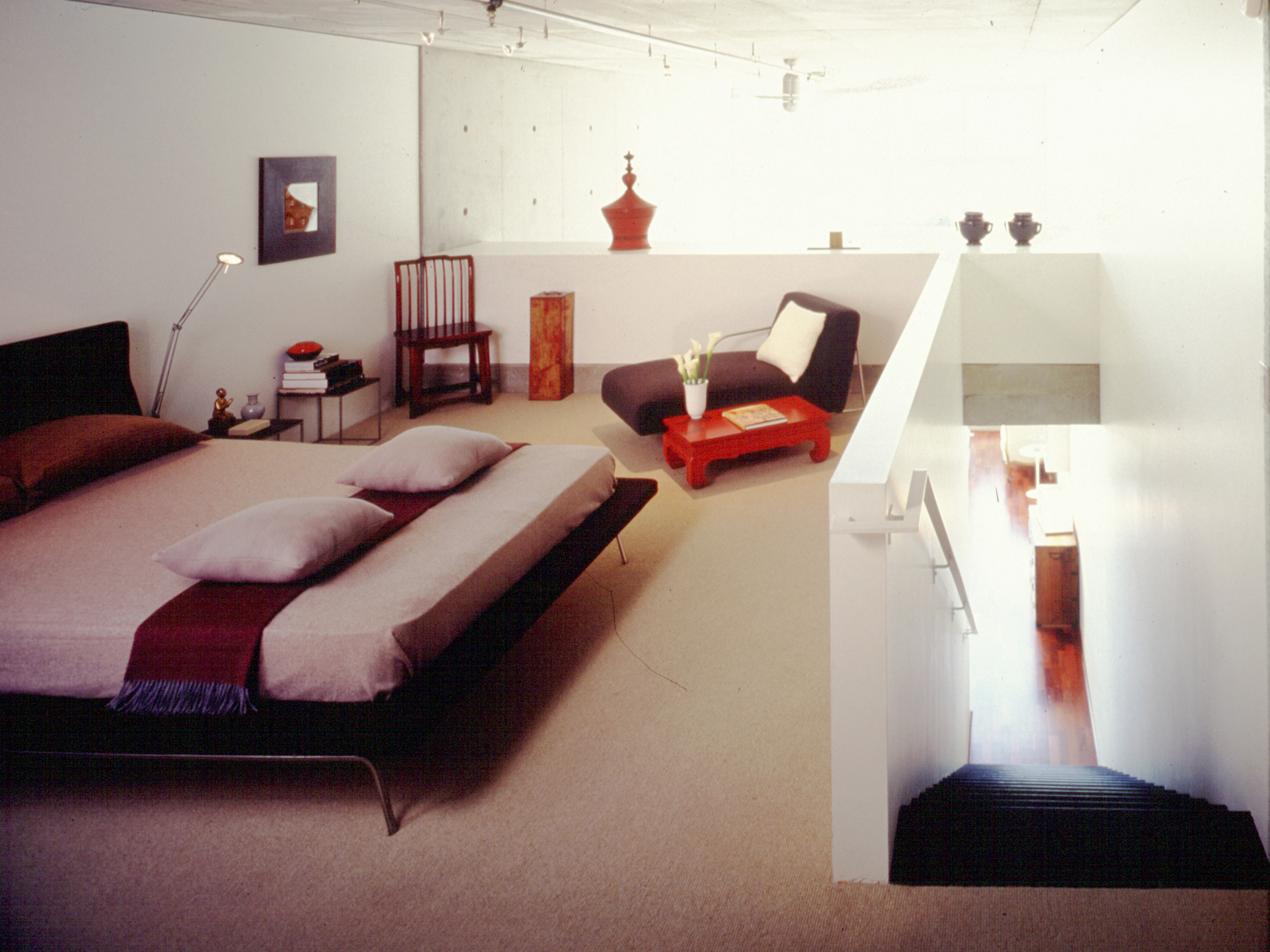 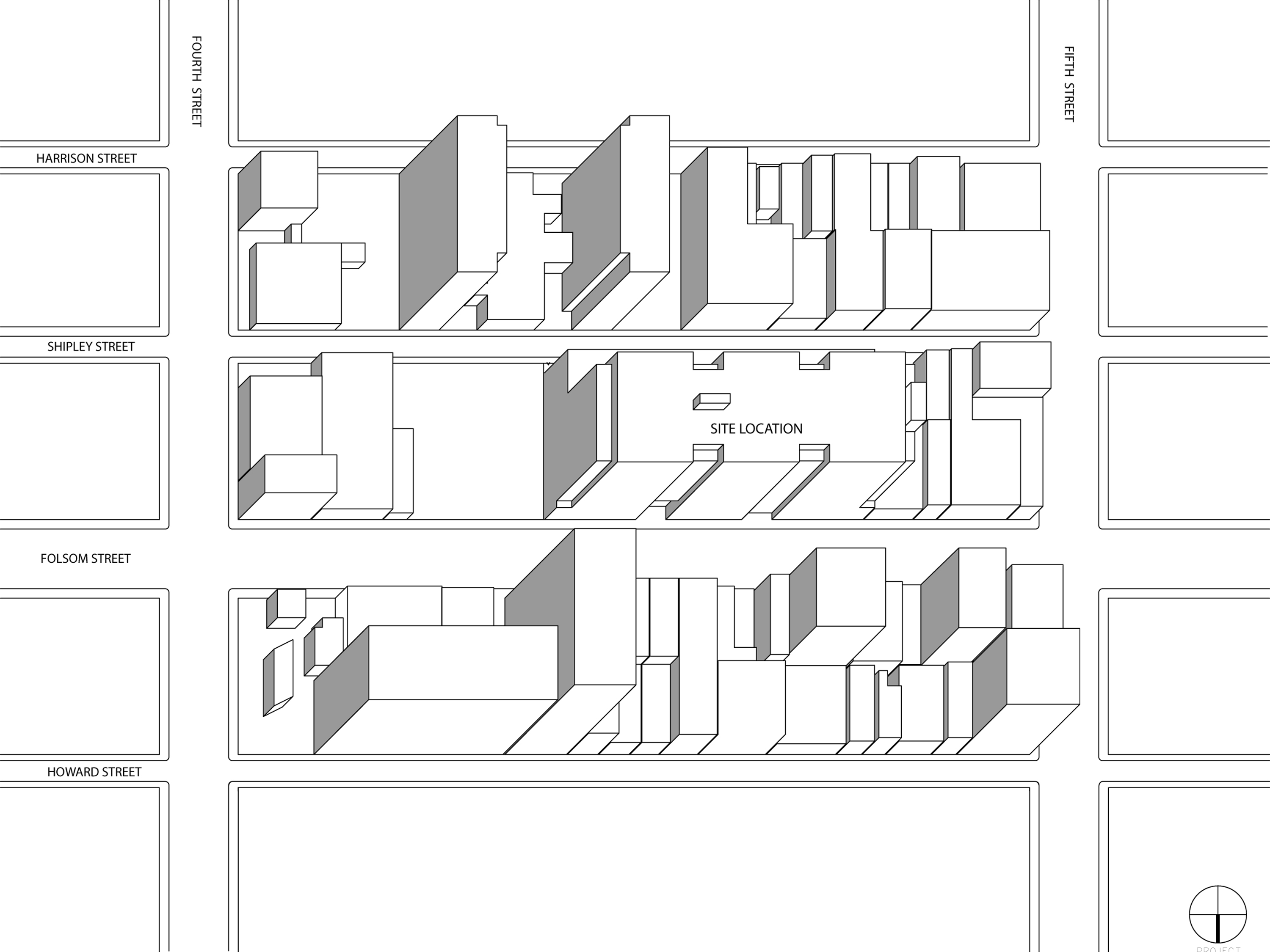 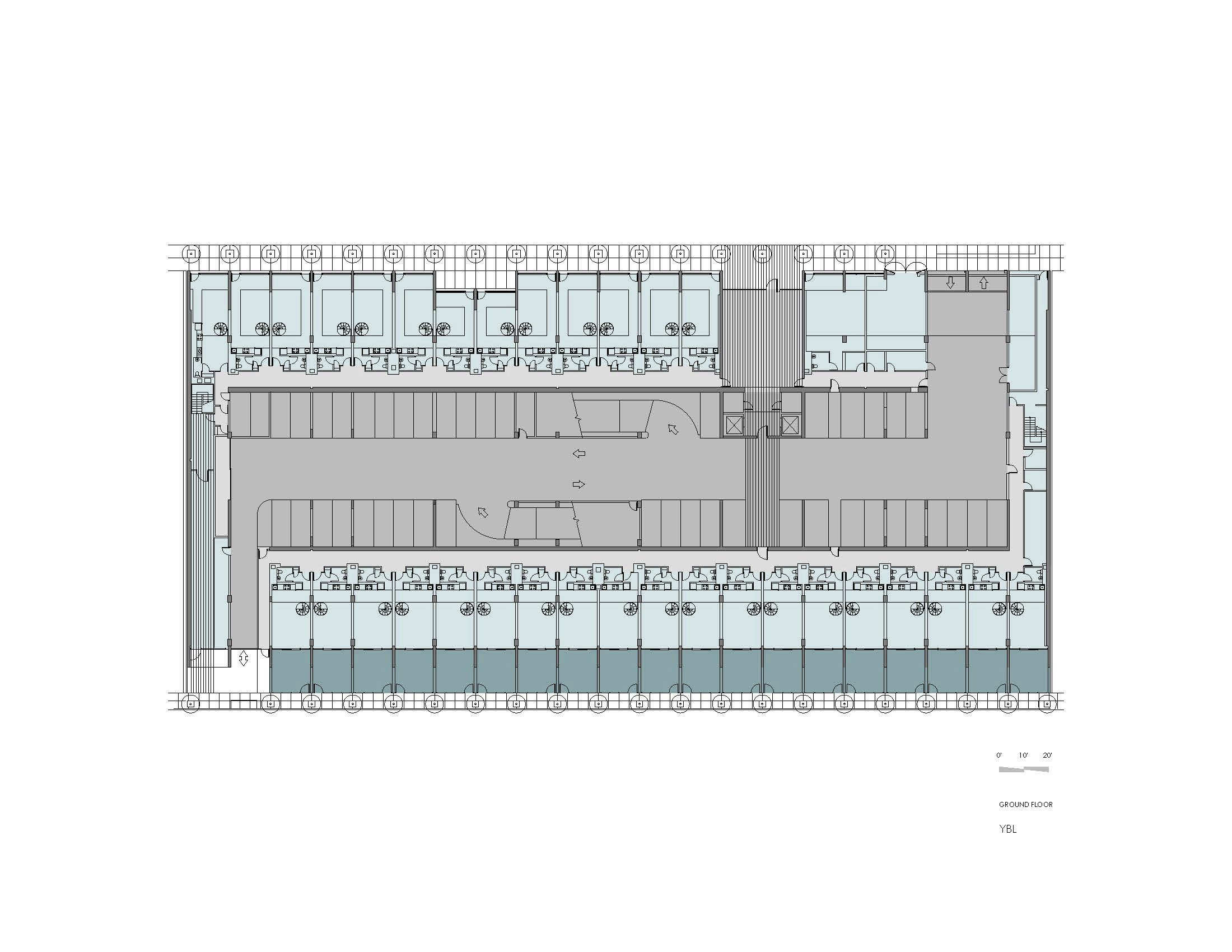 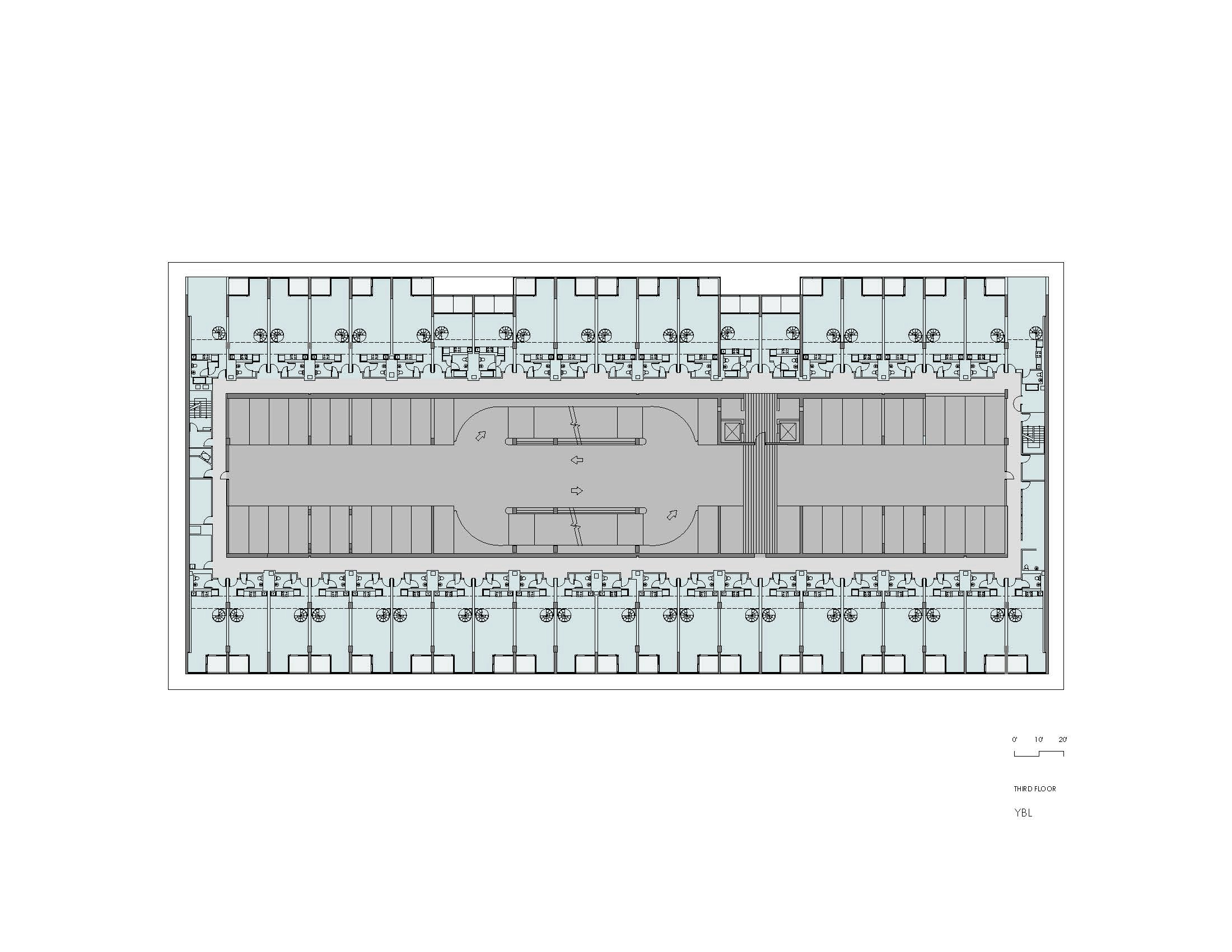 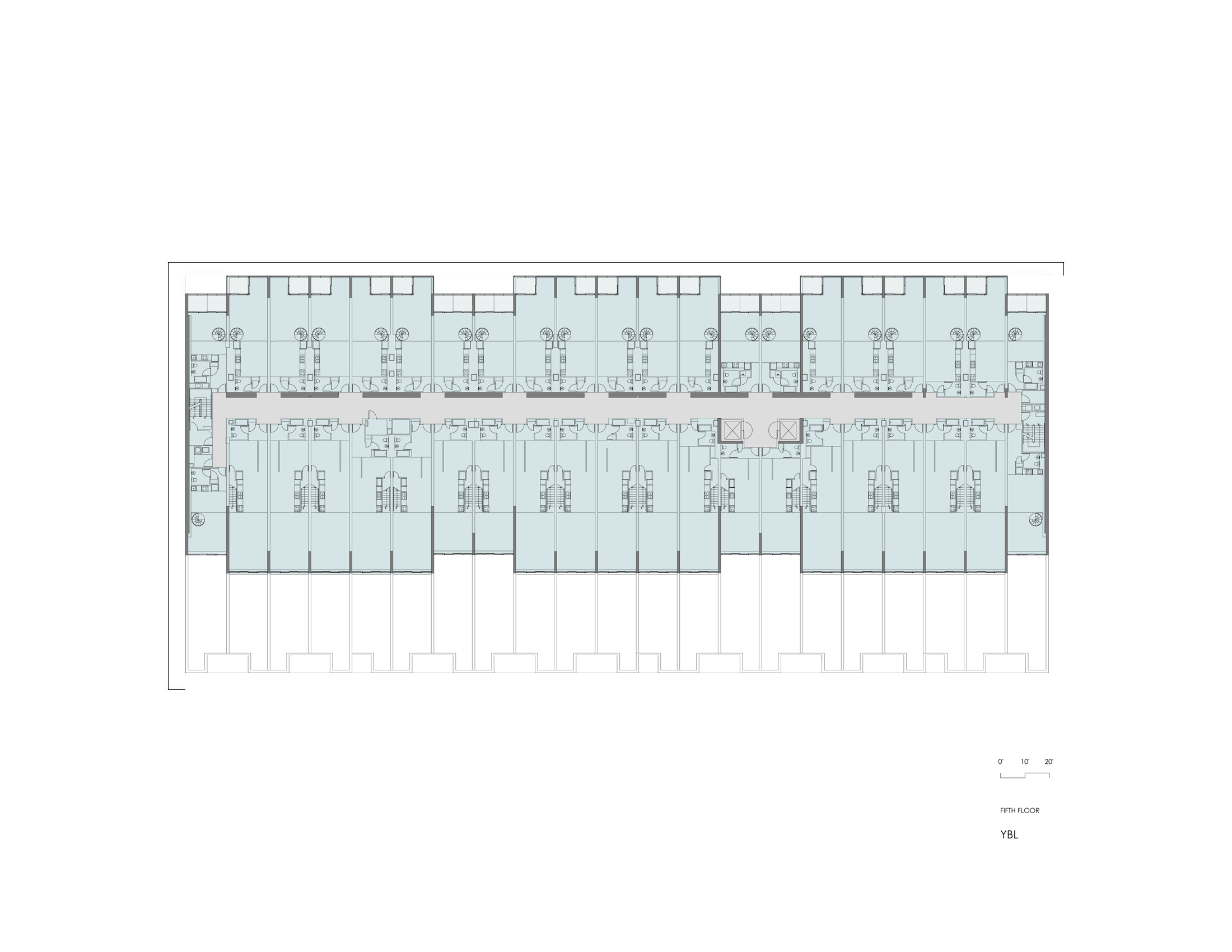 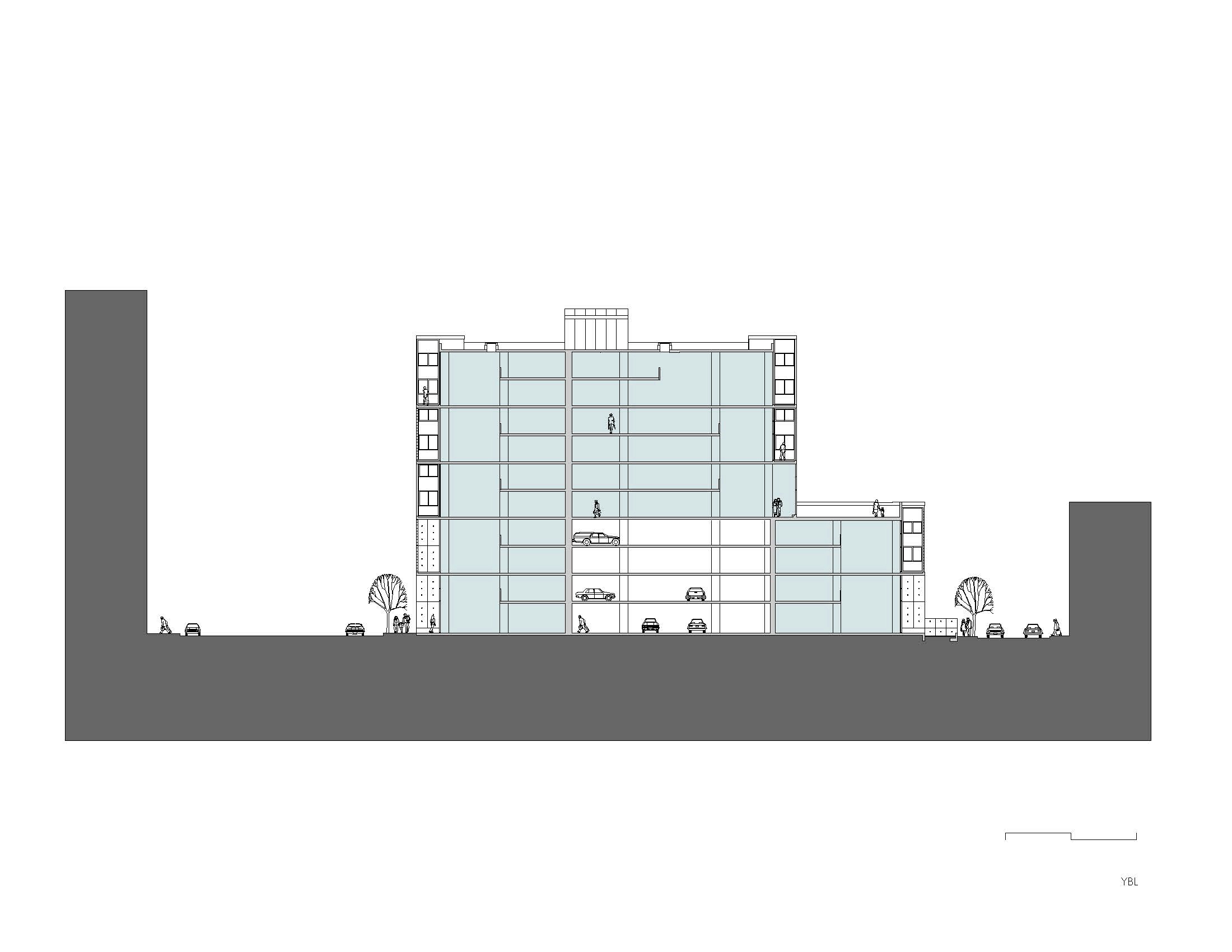 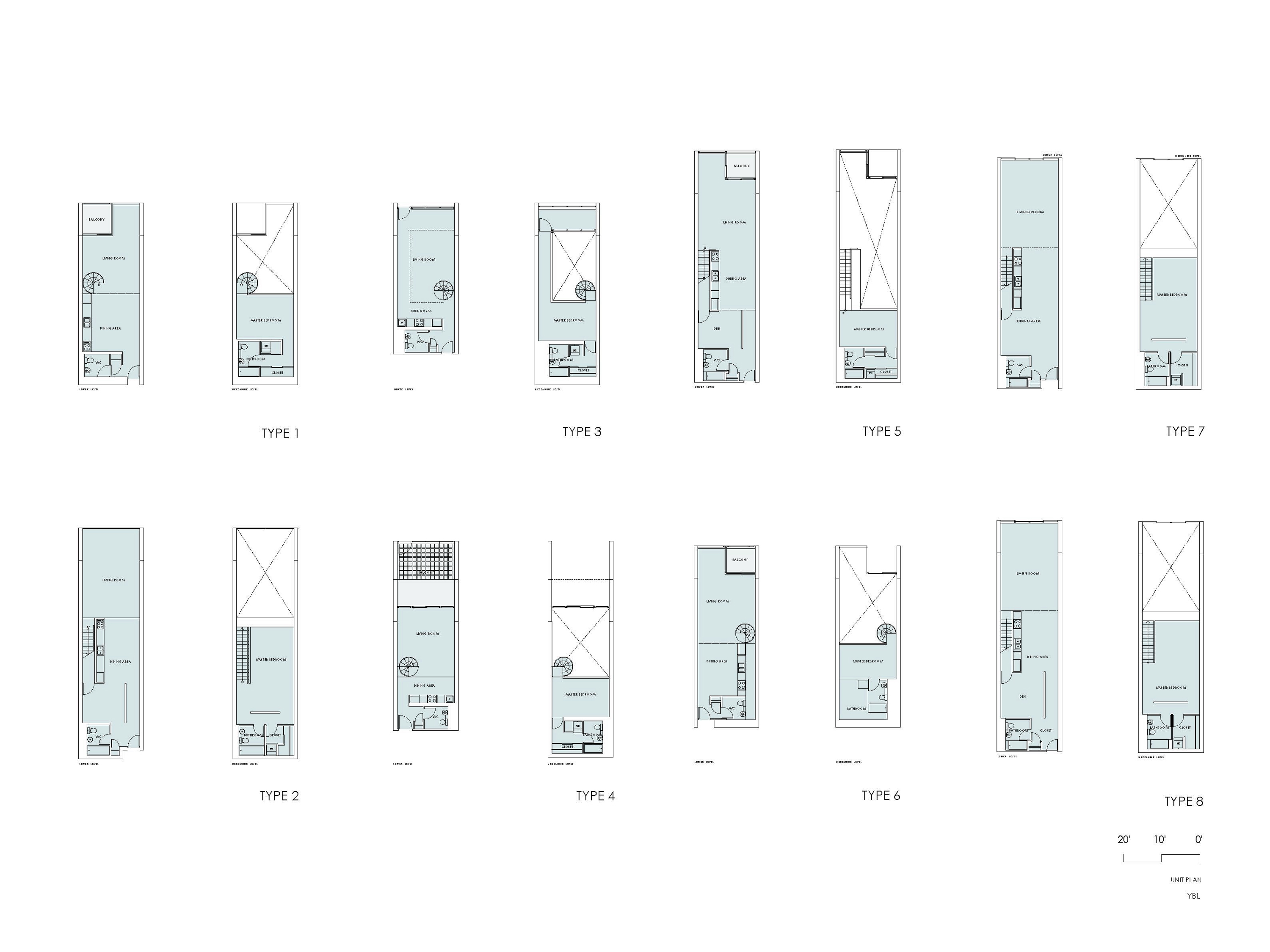 The site fronts Folsom and Shipley Streets, in the middle of the block between Fourth and Fifth Streets. The building has two hundred loft-style residences, parking, and ground-floor work space. The project is modeled on the city: a vertical grid is extruded, establishing a series of “lots” for lofts.

Within this concrete egg crate, translucent-glass-cube “bay windows” alternate with balconies in a musical composition, creating an image both familiar and new and synthesizing the South of Market industrial type with the traditional San Francisco domestic streetscape. The bays and balconies are two stories high, reflecting the lofty interiors. Channel glass on the outermost face of the bays provides radiant interior light and a veil to the city beyond. Clear sliding glass carves out the balconies, which have guardrails of bar grating, both open and transparent. The glass cubes project above the roof, creating an articulated geometric skyline. The 338-foot-long Folsom Street facade is divided by two recesses into three zones; the eastern recess leads to the lobby. Four floors of parking, flanked on both Folsom and Shipley Streets by two-story loft units, are embedded in the lower section of the building, which matches the typical forty-foot-height of surrounding buildings. On these floors, parking is at the same level as residential.

Above on the Folsom side are six more floors of two-story lofts; the Shipley side is set back, making a city wall along Folsom. Each unit has a doubleheight interior and a private exterior and offers optimal open space and volume. Galley kitchens and compressed zones for bathrooms, stairs, and storage maximize the free space of these lofts, inviting inhabitants to personalize and customize their spaces. In this dense urban area, cubic feet replace square feet as a measure: the limited area is amplified by volume, producing generosity. The Yerba Buena building is in the tradition of matter-of-fact industrial buildings that have been converted to lofts, robust frames that support habitation and personalization.

All units have connected indoor/outdoor spaces. Double-height private balconies are typical, with large urban decks where the upper portion of the structure steps back on the Shipley side. These spaces offer a connection to the climate and culture of California, maintaining a tradition that originated with Spanish courtyards and continues with the trellised decks and garden living so prevalent in the Bay Area. The entry sequence also shares this lineage—urban court, private plaza, dry garden; roofed and protected, yet open and connected. This ambiguity between inside and outside is the introduction to the experience of the building and a way of establishing the character of the Yerba Buena Lofts. The building is poured-in-place concrete, with post-tensioned floors.

A systemized and repetitive method that uses flying forms for floors and standardized forms for the egg-crate walls/columns (wallums) is fast and simple, exchanging time for material, facilitating higher quality. Two trades produce the sealed envelope—concrete and glazing—in contrast to the seven trades that follow each other in sealing a typical stucco and window facade. As soon as the forms were stripped, the structure was complete and ready to be glazed. No scaffolding was used; the building basically built from itself. The concrete and the transparent and translucent glass are simultaneously durable and enduring. Concrete is exposed as finish on interior and exterior: the lobby floor is the structural slab saw-cut in stripes and stained; all ceilings are concrete. The actual materials and construction are the final object. The patterned facade dissolves the figure of the building, creating the texture of street grain and expressing the mass. At night, the translucent-glass-cube bays, framed by the concrete grid, make a glowing lantern for Folsom Street and the city skyline.